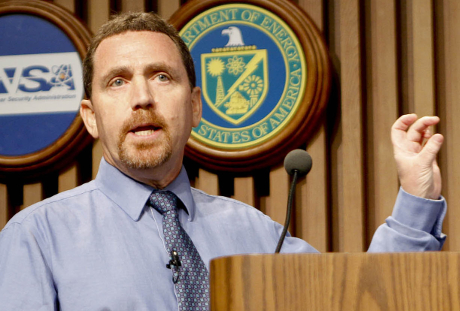 By all accounts, Dr. Ben Santer is a brilliant atmospheric scientist who wound up on the sharp end of attacks by climate change deniers who ruthlessly — and unsuccessfully — pillaged his research and career.

Despite frequent attempts to get him fired from his position at the Lawrence Livermore National Laboratory and personal attacks that included a dead animal being left on the steps of his home, Santer has remained steadfast and continues to work on climate science.

The scientist will be speaking at Confronting Climate Change: Science, Education and Solutions, a free event today at 7 p.m. [editor’s note: this event was held on June 16] at the Science Museum of Minnesota in St. Paul (the event is co-organized by Fresh Energy, where Midwest Energy News is based). The event also features Frank Niepold of NOAA and Will Steger of Climate Generation.

Santer has received a MacAuthur Fellowship for his leadership in international climate change. He first gained notoriety in 1995 for suggesting that humans created climate change in the Intergovernmental Panel on Climate Change (IPCC), an organization sponsored by the World Metrological Organization and the United Nations Environmental Organization.

Among his achievements as a researcher has been to build on climate fingerprinting that reveals how different atmospheric levels respond to global warming. The level closest to the earth has continually warmed due to carbon dioxide trapping in heat while the upper atmosphere has cooled — the opposite would have happened if, as some have suggested, an increase in the sun’s energy has made the world a hotter place.

Since the IPCC report, his work has been relentlessly skewered. No scientist “has been more brutally — or more unfairly — attacked than Ben Santer,” wrote the authors of Merchants of Doubt: How A Handful of Scientists Obscured The Truth on Issues from Tobacco Smoke to Global Warming.

Santer shrugs off the criticism.

“The bottom line is I don’t feel like I’m a victim — Some people will try to portray me as some kind of victim of powerful forces of unreason but I don’t see myself as a victim,” he said. “I have the extraordinary privilege of coming into work every day and learning something about the physical climate system and trying to understand human contributions to historical climate change and what the likely climatic shape of things to come might look like in the 21st century.”

In a phone interview he spoke about the role of scientists in public understanding.

Midwest Energy News: Is the public role of scientists changing?

Santer: Twenty years ago it was frowned upon when scientists went into the public arena and talked about the work that they did and its implications for society. That certainly was not incentivized by funding agencies, by professional organizations. Now it’s fundamentally different.

You have organizations like the American Geophysical Union and the Commonwealth Club giving away awards for reporting about climate science. The National Science Foundation is reserving some portion of the funding for public outreach efforts. Scientists recognize that on critically important issues like climate change they have some responsibility to do the best research they can — but tell people in plain English what they did, what they learned and why it matters to others.

In Merchants of Doubt the authors [Naomi Oreskes and Erik M. Conway] point to two men who led the charge against you have a past that includes going after tobacco researchers and others. What’s your understanding?

It was fascinating to learn some of that history. My job is pattern recognition, climate change cause-and-effect relationships. That kind of pattern recognition was shocking to me. The same individuals whom I had dealt with for decades were on the wrong side of science on cigarette smoking, stratosphere ozone depletion, acid rain, you name it. There’s a pattern there, and I had no idea that the pattern existed.

Isn’t is about money?

I think that’s right. As I see it we’ve had these extraordinary discussions about fiscal debt and I remember prominent politicians decrying the inherent unfairness of burdening future generations with fiscal debt they did nothing to incur. You could with equal justification apply the same arguments to environmental debt.

That there are folks who seem more interested in short-term profit than long-term issues of intergenerational equity is disconcerting. Do they really think their kids are going to be insulated, isolated from the problem of rising sea levels, warming planets and moistening atmosphere changes?

Is the media getting any better on climate change?

I have a sense reporting on climate change is changing. We’re moving away from false balance — “here’s what scientist A thinks, here what scientist B thinks” — to nuanced reporting that says “something is going here.”

And that is what?

We’re witnessing these seismic changes in the climate system in our lifetime. That’s gradually filtering into the public consciousness.

Are corporations seeing it?

I sense changes, in particular, in the fossil fuel industry. For many years they were portrayed as some monolithic entity and they’re not that. I’ve had opportunities to meet with boards of directors of oil companies and they understand in the end some form of carbon tax is likely to emerge and they don’t want to be at a disadvantage relative to coal. People want predictability at the highest levels, and they want equity, a level playing field.

Is a carbon tax the answer?

I’m not knowledgeable about the solution side of things. To me, naively, some form of restriction on emissions of greenhouse gases is essential. Business as usual or adaption is not going to cut it. There’s only so much adaption you can do.

What about the loss of jobs in the fossil fuel industry?

There are economic opportunities for folks who provide low-carbon energy. They are going to be the leaders of the 21st century. This is a false dichotomy that some of our elected officials present — either you do something about climate change or preserve millions of jobs, but you can’t do both is false. The rigid extreme position that the problem doesn’t exist is a failure of imagination that world is going to be a different place.

Yes. We’re having these discussions in the media and elsewhere in society, even in religious organizations, about what it means to know we’re influencing the climate. People like (Senator and GOP presidential hopeful) Lindsey Graham show the partisan divides are being eroded.

People are recognizing we have to do something about this irrespective of political or religious affiliations. The international community is sitting down to discuss what do to about this problem of the commons.

Those are seismic political social changes.