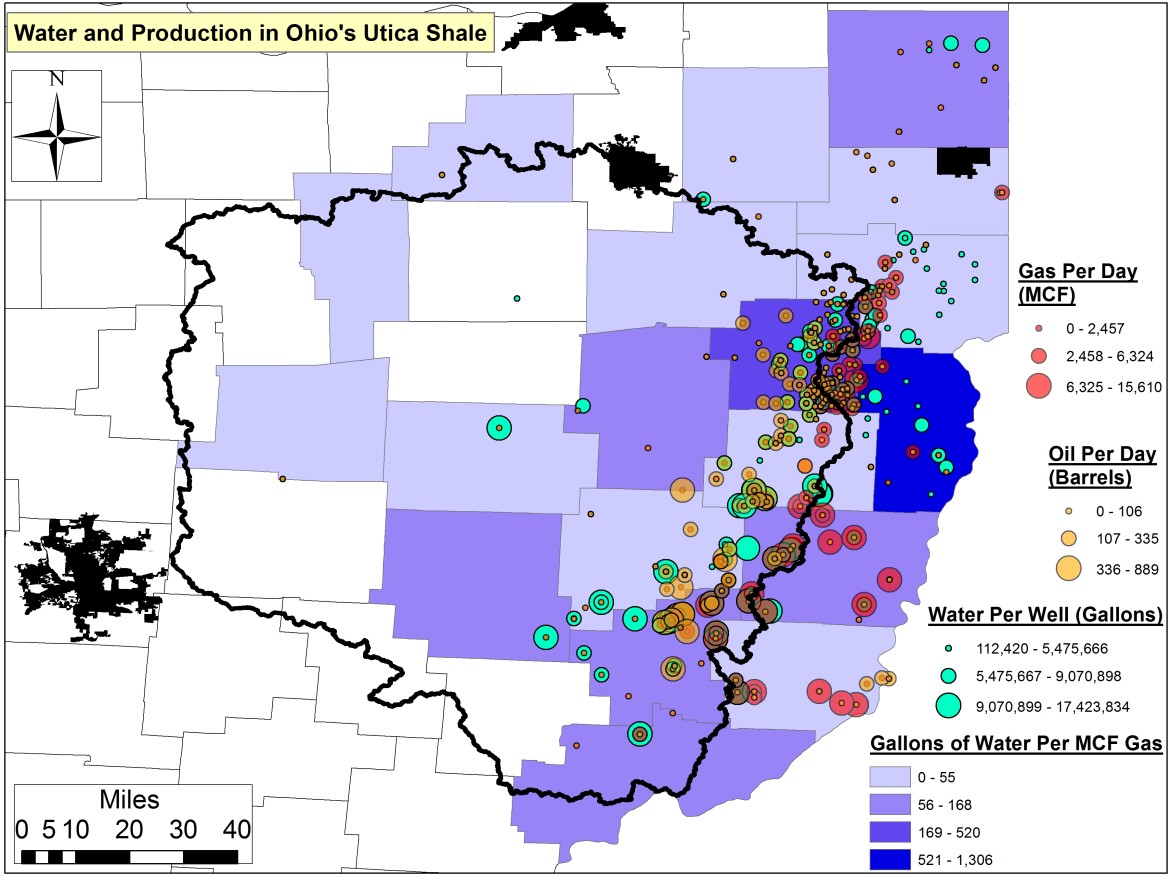 Even in a water-rich state like Ohio, growing water use for fracking could strain water reserves, according to new research from the FracTracker Alliance, a non-profit organization that compiles data, maps and analyses about the impacts of the oil and gas industry.

FrackTracker compared the oil and gas industry’s water use within southeastern Ohio’s Muskingum Watershed Conservancy District (MWCD) to residential use in that area, which covers roughly 20 percent of Ohio. Residential water use includes families’ home use, but excludes water for agricultural, industrial and other purposes.

Although much of the area is rural, Auch said the growing water demands are cause for concern, because those demands might ultimately limit the region’s ability to respond to periods of drought, climate change or other events.

Industry sources dismissed concerns about southeastern Ohio’s water supplies. Local authorities are not worried now, although they note that ongoing management is needed.

The combination of fracking and horizontal drilling has made drilling in Ohio’s deep shale profitable, particularly in the eastern and southastern parts of the state, which sit over the Marcellus and Utica shale plays. Horizontal drilling bores down to and then outward from a “kick-off point” under a well pad through shale layers thousands of feet beneath the surface.

Fracking pumps millions of gallons of treated water plus sand into those deep formations to crack the rock. Most of the fluid flows back, but the sand remains and props the cracks open so trapped oil and gas can escape up to the surface. Companies generally drill and frack multiple wells at each well pad.

The FracTracker research also calculated the oil and gas industry’s water use as a share of the watershed’s “available water.”

“Available water” is the quantity of “water that carries over from year to year” within a watershed, after accounting for uses by agriculture, industry and all organisms that live there, explained Auch. “It’s the water that at any point in time is pretty much what you can count on being there in an average year.”

Calculation of the available water figures “accounted for every single input and output into the system,” Auch said, including precipitation, drainage, water use, evaporation and other factors. He compared the concept to a partly filled bathtub with water running in as some water drains out.

Fracking has already used between 4.8 and 7.7 percent or more of available water from the Muskingum River’s watershed, and that figure will likely exceed 10 percent within a year or two, the FracTracker research found.

Increasing demands on the watershed’s supply of available water is “a big concern,” said Auch. That’s because available water “buffers the system in a given drought period against extreme conditions.”

Shawn Bennett, executive vice president for the Ohio Oil and Gas Association (OOGA), said FracTracker’s focus on available water “would be a fundamental misunderstanding of how the water cycle works.”

“The water is not regional,” he said. “The water that falls into the Ohio River makes its way to the Gulf of Mexico and is redistributed worldwide.  In fact, evaporation from the oceans is the primary mechanism supporting the surface-to-atmosphere portion of the water cycle.”

Auch said that the watershed approach used by FracTracker is common in ecological studies and that it reflects greater detail and essentially all inputs and outflows to the watershed.

MWCD executive director John Hoopingarner said he is “not concerned” about the volume of water being used for fracking, given the size of the state’s water reserves.

Ted Lozier, MWCD’s chief of conservation, said fracking’s usage is “a lot of water, and it needs to be managed.”

“But it’s a small amount compared to the total amount available in this water-rich region of the state,” he added.

To illustrate, Lozier compared oil and gas industry withdrawals from three of the district’s reservoirs to fall drawdown figures for those lakes. For Piedmont Lake, Seneca Lake and Clendening Lake, the 2014 water withdrawals for the oil and gas industry represented 0.086, 1.12 and 1.37 percent of those reservoirs’ respective fall drawdown figures.

The MWCD retains authority to curtail or stop industry withdrawals if water levels at each reservoir reach trigger levels. Those levels vary from lake to lake, based on recreational uses, wildlife habitat concerns and other factors, Lozier explained.

“I think we would have to be in something of a drought condition, and our stream flows would have to be at low flow conditions,” to limit industry use, Lozier said. “That would be a point where you would start to really have to scrutinize and manage those water withdrawals.”

“Ohio is a very water rich state, unlike those in arid regions of the United States,” he said. “There is plenty of water to support our industry, as well as all other industries and the citizens who reside within those counties.”

On June 4 the U.S. Environmental Protection Agency released its draft report on fracking’s potential impacts on drinking water. Industry representatives, including Bennett, welcomed the report’s finding of no “widespread contamination” of drinking water from fracking.

Meanwhile, various scientists and environmental groups criticized the report. Among other things, the critics asserted that the EPA had not gathered sufficient data to conclude whether pollution was widespread or not, particularly in light of the agency’s finding that chemicals from fracked wells had in fact contaminated some drinking water supplies.

The draft report looked at the drawdown of water bodies and groundwater for fracking, but focused on drought-ridden areas like south Texas.

In Auch’s view, that focus is too narrow. “The horse is out of the barn” in dry areas but in states like Ohio, “you have a chance to be proactive.” Unfortunately, he said, “We’re going in the other direction.”

The EPA noted that when water is withdrawn, the quality of the remaining water can be affected.

If the majority of a stream is “taken for a certain use, there will be changes in the chemistry and quality of that stream,” said EPA deputy assistant administrator Tom Burke.

“Likewise, when you draw down an aquifer, it’s important to understand there may be quality impacts,” he continued. “And therefore, water resource management is important.”

Industry’s water demands have gone up and will probably continue to increase in Ohio, Auch said. The horizontal lengths of wells has been increasing, and each extra foot tends to boost a well’s fracking water use between 7,454 and 8,100 gallons, the FracTracker data show.

The organization’s data also show an inverse correlation between wells’ water usage and their productivity. Auch suggested that one reason may be that operators tend to use more water to open as many cracks as possible in the deep rock of a shale play’s less productive areas, particularly since water is relatively cheap compared to other production costs.

If so, then water use by the industry could continue to be an issue as Ohio’s shale gas boom continues and eventually subsides.

Note to readers: Midwest Energy News editor Ken Paulman serves on the board of the FracTracker Alliance. This story was edited by Kari Lydersen.