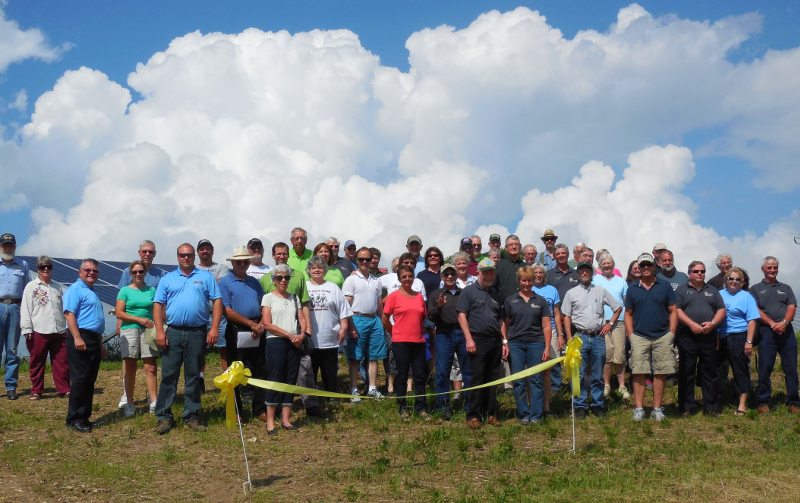 Together, these installations constitute about one-third of the solar generating capacity energized in Wisconsin last year, and provide enough energy to supply the annual needs of over 100 Wisconsin households. Structured as a “community solar garden,” which enables members to subscribe to one or more individual panels, Vernon Electric Cooperative’s installation was the first of its kind in Wisconsin.

More Wisconsin electric cooperatives are joining this push. Eau Claire Electric Cooperative is steaming ahead with plans to build the state’s largest member-supported solar garden in 2015. At 858 kilowatts, Eau Claire’s installation will surpass the combined capacity of the two Westby arrays. Nearby, Clark, Pierce Pepin, Riverland and Taylor cooperatives are moving to procure a slice of the sun for their members.

Next door in Minnesota, electric cooperatives began driving the community solar train in 2012. As explained by Mark Vogt, CEO of Wright-Hennepin Cooperative Electric Association: “There is an intangible about solar that our industry better not miss. Part of it is that for the first time consumers get to make all or part of their own power. Part of it is that they have a choice.”

All this serves as prelude, however, to the ground-trembling announcement from La Crosse-based Dairyland Power Cooperative just two weeks ago. At its annual meeting, Dairyland, which supplies electricity to 25 member cooperatives and 17 municipal utilities, disclosed its plans to add a whopping 25 megawatts of new solar generating capacity to its supply portfolio by July 2016. Dairyland went right to work: it posted a Request for Proposals on its web site with an August 31 deadline for responses.

Dairyland envisions sourcing the solar electricity from independently owned installations between one and five megawatts (MW) in size sprinkled across its four-state service territory. About 70 percent of Dairyland’s electricity supplies its Wisconsin customers.

Two things stand out in Dairyland’s solar initiative. One is that the cost of solar electricity has declined to the point where Dairyland is comfortable spreading the cost of this investment across all its wholesale customers.

The other is that Dairyland, a nonprofit entity, has decided against building the solar generation itself, relying instead on a competitive process that takes full advantage of the 30 percent federal investment tax credit in place through 2016. The winning for-profit businesses should deliver solar power to Dairyland at a significantly lower cost than if Dairyland were to own the systems outright.

Dairyland has moved past the “dipping the toe in the water” stage of solar development and is now taking the plunge. In addition to laying out an aggressive timetable for project development, the solicitation calls for contracts lasting between 20 and 25 years, allowing Dairyland to lock in today’s favorable pricing and stretch it out for an entire generation.

Let’s be clear about one thing: Dairyland’s solar announcement is driven by corporate strategy, not compliance needs based on current law or policies. Dairyland has already met its 2015 requirements under Wisconsin’s 10 percent renewable portfolio standard, and there are no other legal or environmental matters for these arrays to address.

It’s simply a business decision. Dairyland now believes that the timing is favorable to diversify its resource mix and take full advantage of solar’s positive economic attributes, especially when calculated over a 25-year planning horizon. As a locally available resource that requires only sunshine to operate, solar avoids all of the potential economic risks and environmental liabilities associated with fossil fuels.

And it’s undeniably popular with utility customers: 90 percent of Wisconsin citizens support the expansion of solar energy. Hopefully, other Wisconsin utilities will come to appreciate its popularity and figure out how to structure large solar investments.

Though investor-owned utilities and municipal utilities are trailing the co-ops, a few are trying to catch up. WPPI Energy, for example, will soon offer trial projects in two communities, River Falls and New Richmond, and Xcel Energy recently received approval to offer a large (3 MW) pilot community solar program.

But Wisconsin’s largest utility, We Energies, remains firmly committed to taxing its customers who seek to reduce their electricity bills with rooftop solar systems. Given the zeal with which it sought to penalize customer use of solar energy and the degree to which it overinvested in expensive and underperforming coal plants, it’s a safe bet that We Energies won’t be boarding the solar train any time soon.

Michael Vickerman is program and policy director of RENEW Wisconsin, a renewable energy advocacy organization and a member of RE-AMP, which publishes Midwest Energy News.