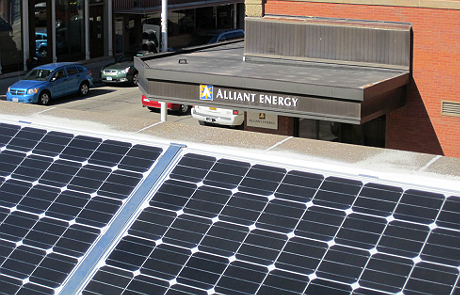 Iowa’s two major investor-owned utilities are refusing to net-meter solar projects financed by a third party, a funding mechanism that was upheld last summer by the Iowa Supreme Court.

By prohibiting customers from banking excess power for later use, the utilities are making solar projects financially less viable and, in the opinion of some clean-energy advocates, may be violating the court’s judgment in the case involving Eagle Point Solar, a solar installer based in Dubuque.

Eagle Point is working on a third-party solar installation for the city of Asbury. Eagle Point and Asbury have reduced the scale of the project because, company president Barry Shear says, Alliant Energy is “artificially suppressing the economics of the project.”

Alliant is doing this by taking the position that under a third-party ownership structure, net metering would be “reselling” energy, which would be a violation of their rate tariffs.

The Asbury project is the first third-party solar installation that Eagle Point has developed since the ruling last summer. Shear initially sized the project at 586 kilowatts. Of that, 230 kilowatts were slated for city hall and three small structures. Shear was not aiming to produce more than the buildings required, and therefore didn’t need net metering.

He had bigger plans for the city’s wastewater treatment plant, however. He intended to install 356 kilowatts there, producing enough power to offset 90 percent of the building’s electricity use. He would need net metering to make that viable, but Alliant told him net metering was not an option.

Shear then pared the wastewater treatment plant from the plan. He contends that Alliant’s position “is not supported in the rate tariffs or in the Iowa code.”

Shear is not the only one who believes that Alliant and MidAmerican are flouting the Iowa Supreme Court’s ruling in the Eagle Point case.

The two utilities persist in “trying to make the same distinction that the court rejected,” said Josh Mandelbaum, a lawyer for the Environmental Law & Policy Center, the non-profit entity that brought the case before the Iowa Supreme Court. “It doesn’t make a difference if a project is leased or paid for outright or paid for through a (power-purchase agreement).”

While the net metering issue “is not directly on-point,” he said, “certainly the spirit (of the ruling) is being violated.”

Nathaniel Baer, energy program director for the Iowa Environmental Council, said he believes that “net metering would apply whether it’s a third-party owned or a customer-owned system. Net metering is a metering arrangement that should be in place regardless.”

Alliant will “gladly” purchase excess power from those projects, said spokesman Justin Foss, but at a substantially lower price than the net-metering rate, which is basically the retail price for power.

And that, according to Baer, “creates some real challenges to making the projects viable.”

MidAmerican Energy takes a similar position: net metering is offered only to customers who buy all of their power direct from MidAmerican, not to people buying at least some of their energy from the owner of the solar panels on their property.

“That’s in our rates as approved by the (Iowa Utilities Board),” said MidAmerican spokeswoman Ruth Comer.

“What exactly are they referencing there?” Baer asked. “The rules on net metering are silent on ownership.”

The Iowa Utilities Board “cannot take a position at this time on whether the provision (to deny net metering to third-party installations) is, or is not, reasonable and lawful,” board spokesman Don Tormey wrote in an e-mail. “Any interested person can file a complaint with the Iowa Utilities Board, arguing that the prohibition on net metering for third-party installations is unreasonable or unlawful.”

Other projects scaled back

Following the court’s ruling last summer, there were predictions of a solar boom among tax-exempt utility customers that, subsequent to the court’s determination, finally would have a path to reap state and federal solar tax incentives. But projects have been slow to materialize.

The Iowa Falls school district began crafting a plan to put solar panels on all four of its schools, assuming it could net meter and use excess energy at times when consumption exceeded production. But the picture changed when the district’s solar partner, Novel Energy, informed the district that Alliant would not allow the third-party installation to bank credit for energy sent back to the grid.

The district hasn’t given up, according to superintendent John Robbins, but without net metering, he said the project becomes “financially difficult” and may have to be reduced in size. He’s concerned that he may have trouble finding investors as a result.

Johnson County is another case in point. The local government had planned to install a 140-kilowatt system at one of its maintenance buildings. But after MidAmerican Energy said it doesn’t pay a net metering rate to customers with third-party solar installations, the county government revised its plan down to 87 kilowatts.

The county originally sized the system to generate enough power that the county could bank what it didn’t need during high-production times of year, and then tap into it when its consumption exceeded production. Without net metering, banking credit for excess energy isn’t an option, leading the county to scale back on its ambitions. The projected 25-year savings consequently tumbled from $275,000 to $152,000.

Shrinking the size of the array “unfortunately limits our abilities to make this truly a funding mechanism that would be in the best interests of the county,” said Terrence Neuzil, a member of the Johnson County Board of Supervisors. “We are frustrated that there isn’t a better arrangement between local governments and the state and those who have oversight on energy regulation.”

Mandelbaum, of the Environmental Law & Policy Center, said that the utilities “have been alerted that folks are concerned and have a different interpretation of the rules. They’re not indicating any changes based on customer concern. We will look at what options are available for how to address this.”

Shear indicated that he, too, will not let the matter rest.

The Environmental Law & Policy Center and the Iowa Environmental Council are members of RE-AMP, which publishes Midwest Energy News.