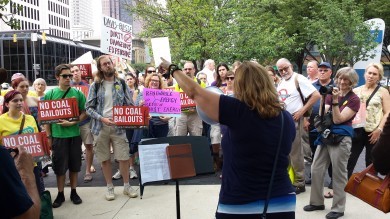 FirstEnergy continues to fight against full disclosure of details in its bid to have Ohio ratepayers guarantee sales for three less profitable coal plants plus the Davis-Besse nuclear plant, even as it adds new rate proposals.

FirstEnergy says the new provisions are separate from its proposed power purchase agreement, or PPA. The company admits that plan will cost consumers more in the short run, but claims it will save money over the long term.

The whole case is before the Public Utilities Commission of Ohio (PUCO) and is scheduled for trial this summer. After that trial, the PUCO will rule on FirstEnergy’s power purchase plan, the new proposals and issues dealing with the utilities’ general terms of service.

Opponents have called the power purchase plan a “bailout.” And in a filing last week, a group of competing energy suppliers and consumer advocates claimed FirstEnergy’s addition of new terms so close to the trial is just the “latest special deal” to defuse industry opposition at consumers’ expense.

Beyond that, FirstEnergy’s resistance to disclosing all the details has frustrated members of that group and other parties who oppose the “bailout” plan.

“If the deal were as good as the company claims, this lack of transparency wouldn’t be an issue,” said Dan Sawmiller of the Sierra Club. “The public has a right to know what they are being asked to pay for, and whether that proposal will have significant negative consequences.”

FirstEnergy’s plan would require all distribution customers of its Ohio utilities to cover costs for a deal guaranteeing sales for all electricity from certain unregulated plants affiliated with FirstEnergy. The utilities would resell the electricity and credit ratepayers for that amount. Whenever the resale price is less than the price under the deal, ratepayers would effectively be subsidizing the plants.

In its filings, FirstEnergy has said ratepayers will pay more for several years but claims customers will come out ahead and save $2 billion over the course of 15 years. However, an expert for the Office of the Ohio Consumers’ Counsel and the Northeast Ohio Public Energy Council has said that estimate is highly speculative. That expert, Matthew Kahal, estimates FirstEnergy’s plan will more likely cost ratepayers $3 billion over that period.

FirstEnergy added new proposed rate provisions to the case in December and then on May 28 and June 4. In return for terms in those filings, about 16 parties that otherwise were opposing or could have opposed the company’s plan promised they would not object to it or offer evidence to PUCO.

The May 28 filing added terms to extend or modify various riders that benefit industrial customers. At least one of those riders could shift costs to consumers and other ratepayers.

In addition, new provisions in the May 28 filing would let members of the Ohio Energy Group and Industrial Energy Users—Ohio, as well as Nucor Steel Marion and Material Sciences Corporation, make arrangements to avoid certain transmission charges that consumers and all other customers pay as part of the distribution portion of their energy bill.

The same day the May 28 provisions were filed, Industrial Energy Users—Ohio dropped its opposition to the proposed “bailout” plan.

“It gives some of our large commercial customers the opportunity to reduce their on-peak consumption by having the ability to respond to price signals throughout the day,” Colafella said.

Definition of the class that could get the special rate is very specific. Among other things, a company would have to be headquartered in Ohio, operate at least 30 locations in FirstEnergy’s distribution territory, use at least 1.5 gigawatt hours of electricity per year at each facility, and have a “major portion” of that load come from refrigeration.

FirstEnergy has declined to provide detail on things such as whether the time-of-use rate would be revenue neutral or how it would work for a hypothetical company that qualified for it.

“This proposal is still being litigated, so we’re currently not in a position to divulge further details beyond what’s in our public filing,” Colafella said.

Meanwhile FirstEnergy has been reluctant to provide full details even in the PUCO proceeding.

On June 8, a coalition of business and consumer interests filed a joint motion to extend the discovery and trial schedule in the case. That group includes the Retail Energy Supply Association, the PJM Power Providers’ Group, the Electric Power Supply Association, the Ohio Consumers’ Counsel, Ohio Partners for Affordable Energy, the Ohio Manufacturers’ Association Energy Group and the Northeast Ohio Public Energy Council.

“It is unclear who will actually benefit from this proposal, and whether the limitations and restrictions are reasonable,” the challengers noted in their brief. “Further, if there is a benefit, discovery needs to be utilized to determine what the cost will be and who will bear such costs.”

The Kroger Company, headquartered in Cincinnati, joined in signing the June 4 filing. Although it’s unclear whether the supermarket chain would fall into the new proposal’s rate class, an analysis by the U.S. Environmental Protection Agency’s GreenChill Partnership found that the average U.S. supermarket consumes 2.3 gigawatt hours of electricity annually.

In a follow-up filing, the challengers’ group rejected FirstEnergy’s characterization of the new June 4 provision as being completely separate from the deal with its affiliated power plants.

“FirstEnergy has lined up a number of customers” to support or drop opposition to the power plant deal in order to get the PUCO to approve that plan, the group argued. “The support or non-opposition of those customers…appears to have been purchased by FirstEnergy through various special deals,” their June 17 brief said.

FirstEnergy has opposed the request to extend the discovery and trial schedule, calling it “an improper attempt to gain delay for delay’s sake.”

Meanwhile, with trial scheduled for this summer, FirstEnergy and Duke Energy appealed a hearing examiner’s order saying challenger IGS Energy is entitled to get testimony from another case that might impeach the credibility of one of FirstEnergy’s key witnesses, Judah Rose.

Rose previously offered the testimony on behalf of Duke Energy, and if he was wrong in his estimates in that case, it could undermine his believability in the FirstEnergy case. IGS Energy, a competing energy supplier, has been seeking that material since December.

“FirstEnergy’s case rests on projections of what electric and commodity markets will look like over the next 15 years,” explains Sawmiller. “By looking at Mr. Rose’s past attempts to forecast markets—and comparing those forecasts to reality—the Commission can assess the credibility of Mr. Rose.”

Consumer advocates say FirstEnergy needs to provide more information to the Commission so it can make a fair decision.

“The Commission should demand the very best information with so much customer money on the table,” said Sawmiller. “Unfortunately, FirstEnergy has done everything it can to thwart the Commission’s access to basic information about this proposal.”

And even when FirstEnergy has provided various financial details to the commission, much of that information has been covered by protective orders that prevent disclosure to members of the press and the general public.

Meanwhile, the case has generated substantial public interest. The PUCO case docket has hundreds of comments from concerned citizens. Groups have criticized the plan publicly as well. Last week, for example, about 100 people attended a Columbus rally organized by the Sierra Club and Ohio Citizen Action.

In Sawmiller’s view, such vocal opposition reduces the impact of any large industrial or commercial customers dropping their opposition to the “bailout” plan.

“FirstEnergy was able to buy support from some large industrial customers through special deals,” he said, but those “deals will not protect the average residential customer from the negative impact of the bailout.”

“I fully expect the Commission to protect the average ratepayer and deny the bailout proposal instead of approving special deals for a select few,” Sawmiller added.