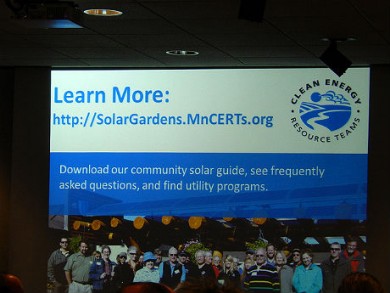 A 2013 discussion about Minnesota community solar at the Saint Paul Science Museum.

Xcel Energy has reached an agreement with several developers that proposes to limit the size of co-located community solar gardens to 5 MW or less. Submitted Monday to the Minnesota Public Utilities Commission, the proposal allows solar farms substantially larger than the utility’s original proposal to limit such installations to 1 MW or less. The commission will decide Thursday what, if any, limitations it will impose on co-located community gardens.

The agreement between Xcel and the developers, if implemented, would still allow Minnesota to have one of the nation’s largest solar garden programs, according to Laura McCarten, regional vice president for Xcel. Any proposed projects more than 5 MW would be scaled down to the 5 MW cap, she said.

Xcel met with developers over the past few months to reach an agreement to bring to the commission.

“This sets the right balance for our customers, who will pay the higher costs of the program, and the developers, who could officially go forward to develop certain projects,” McCarten said.

Even with the 5 MW limitation, the Minnesota community solar program would generate several hundred megawatts of energy, she said. The agreement would “move the program forward” and “result in a successful long-term program.”

The list does not include some of the larger community solar firms such as Sunshare, SunEdison and many others that have submitted proposals. The commission will decide Thursday what, if any, limitations it will impose on co-located community gardens.

Xcel’s concern has been over the sheer size of the program and the premium it would pay to purchase power generated by community solar. As of Tuesday, 914 MW of community solar has been submitted in Minnesota, McCarten said.

Developers had initially said that the 1 MW limitation would “decimate” the state’s community solar program and that it went against state regulators’ interpretation of the program.

“We were estimating it would cost $2 billion over the lifetime of the program,” McCarten said.

Under the agreement, the 5 MW limit would last until Sept. 25. Then, the cap would drop to 1 MW for a period of one year to allow time for the commission to once again study co-location limitations, McCarten said.

Under the state’s community solar legislation, gardens can be no larger than 1 MW. However, developers have proposed co-locating several — sometimes dozens — of 1 MW gardens at sites with good connections to the Xcel electric grid.

The “partial settlement agreement,” as the document is called, does not change the price Xcel will pay developers for community solar power and offers changes to allow for “greater transparency and expediency” in the interconnection process, according to a letter accompanying the agreement.