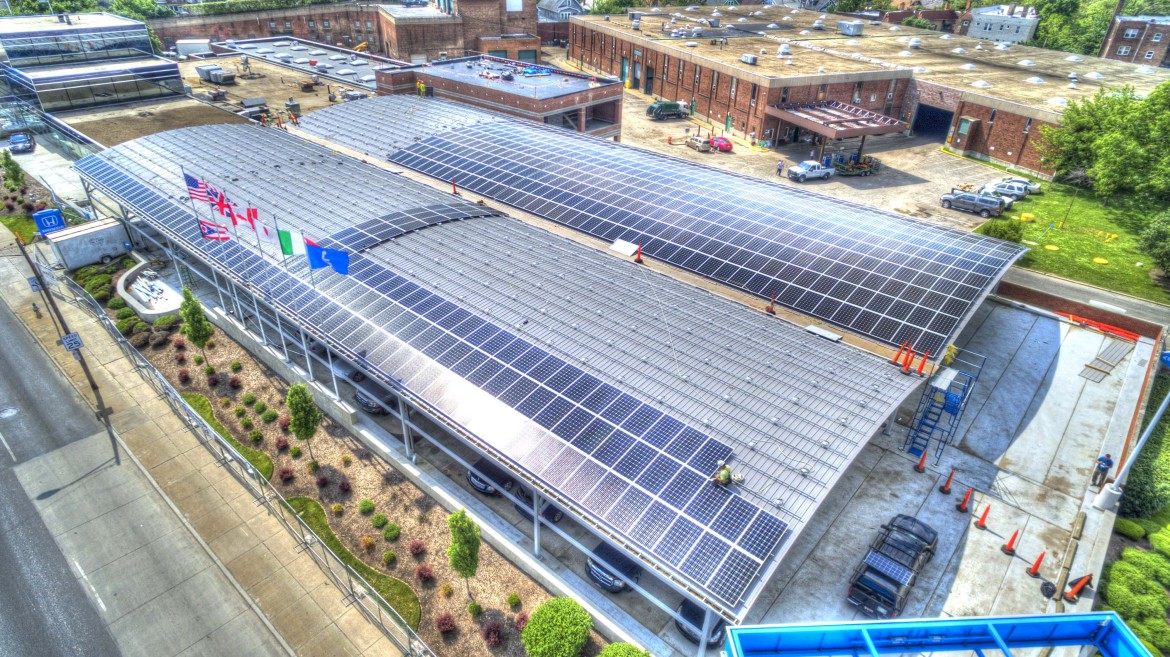 A Cleveland Heights, Ohio auto dealer has installed what it says is the largest solar canopy of its type erected by any automobile dealership in the country.

In mid-June, Motorcars Honda completed construction on a double-barrel canopy that contains 1,239 SolarWorld 270-watt PV modules, with a total capacity of 335 kilowatts.

General manager Trevor Gile said he expects the effort will cut the dealership’s annual electric bill by about 70 percent. That estimate also includes the planned expansion of its service department that will more than double the dealership’s size. Because of its power needs, Motorcars Honda will use all the electricity that its solar system produces on a monthly basis, and will not have an excess to sell to the grid.

It cost $1.8 million to build the solar panels and canopy, which measures 200 feet by 120 feet, and covers most of the dealership’s display lot on the corner of Mayfield Road and Superior Avenue in Cleveland Heights.

Eighty percent of the material used to fabricate the support trusses for the solar canopy was recycled metal from junked automobiles. The project was designed and installed by Dovetail Solar and Wind of Athens, and work began in November 2014.

“We should have less than a 10-year payback, and that includes the 30 percent federal tax credit,” said Gile. “For every new Honda we sell this year, we will be reducing their carbon footprint by an equal amount through our use of solar power. So we’re carbon neutralizing.”

Gile credits Dovetail for researching the attributes of solar canopies built by other U.S. auto dealers, and he credits Honda for calculating the Motorcars dealership’s carbon footprint and supporting its solar project.

“Honda encouraged us,” he said. “This year they’re going to issue us 100 additional cars for our involvement in green energy, and we will have the ability to earn more in the future.”

In the automobile business, the more cars a dealer has in stock, the more likely it is that they’ll increase sales by being able to match potential buyers’ tastes and preferences. By having the display area covered, customers will be protected from the elements and salespeople won’t have to take time out of their day to scrape snow off vehicles, he said.

Adding to the energy savings equation, the dealership swapped out conventional lighting for LED lights in the showroom, display lot and outdoor parking areas. The intention is to have LED lighting throughout the property and currently the lights are being installed in the office.

The company is also starting a bicycle program for service customers in need of transportation while their cars are being worked on. Gile said he has acquired “a fleet of bikes” to offer as an alternative to rental cars and he is working with the city to design a bike trail through the neighborhood. He also hopes to line up some local eateries that will sweeten the pot by providing coupon offers.

The family-owned business, led by Trevor’s father Chuck Gile, may soon take its green practices to Motorcars Toyota, directly across the street from the Honda dealership.

“We’re already getting drawings and renderings on how to incorporate solar at the Toyota dealership,” Trevor Gile said.

Public response to the solar canopy at Motorcars Honda has been positive, and Gile expects it will boost sales. But beyond that, “it’s just the right thing to do and we hope that other businesses will be inspired to follow suit,” he said.

Meanwhile, Dovetail is working with the Giles on what could result in another double-barrel solar canopy.

“I’m glad to be working with them on the possibility of replicating the solar canopy at their Toyota dealership,” Dovetail president Alan Frasz said.

However, his company has lost business and had been forced to lay off 18 of its 40 staff, he said, due to Ohio Senate Bill 310 which took effect in the spring of 2014, placing a two-year freeze on the state’s renewable and energy-efficiency standards.

“We had signed agreements that were taken off the table,” Frasz said. “A number of projects in the pipeline also went away, and we had to close our Toledo office, going from five offices to four.” Along with Athens, Dovetail has offices in Cleveland, Columbus and Cincinnati.

Set in 2008, Ohio’s renewable and efficiency standards stipulated that 25 percent of electricity sold by in-state utilities was to come from alternative sources, with half that fraction generated from renewables. Under the two-year freeze the renewable energy mandate stands at just 2.5 percent. A legislative committee is currently reviewing the standards.

SB 310 also reduced the value of renewable energy credits that owners of solar installations – like Motorcars – could sell. But the reduction did not influence the Giles’ decision to install solar at the auto dealership.

“We felt our responsibility to the community and the environment outweighed the loss in the value of the credits,” Gile said.

Connie Lewis is an Ohio-based freelance writer who has an extensive background covering business beats at various newspapers across the country. She may be reached at: conniemarylewis1964@gmail.com