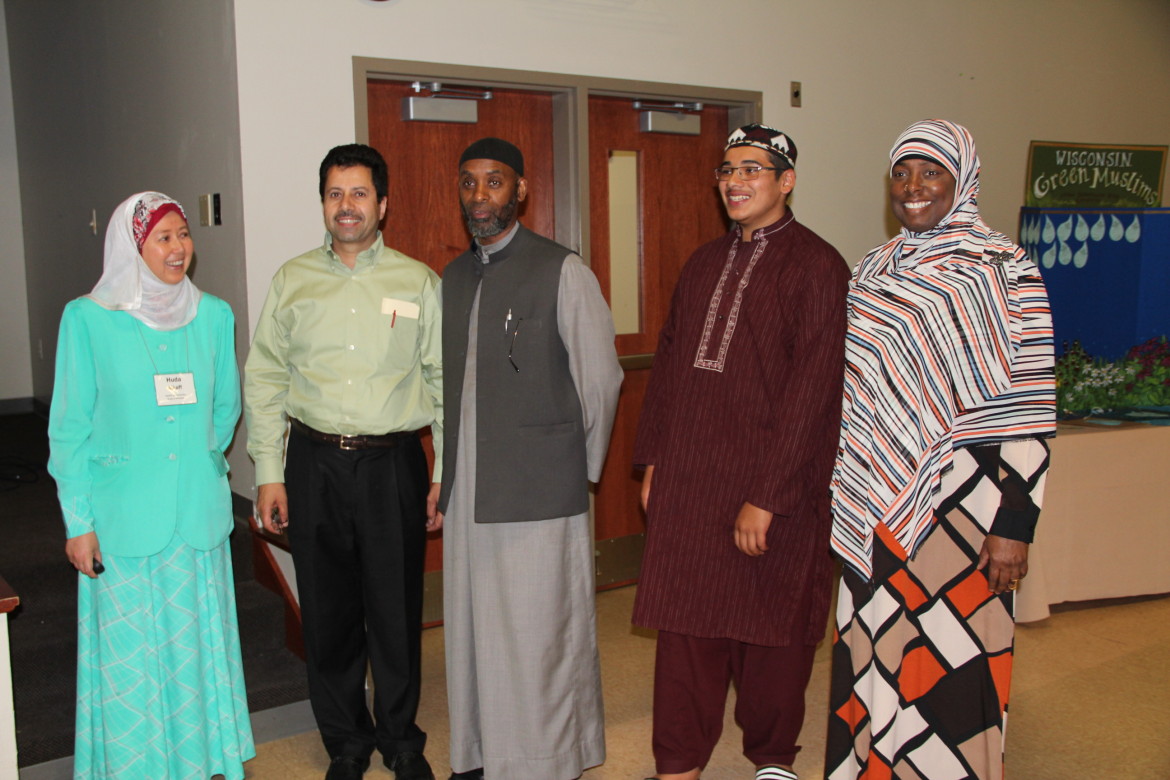 Huda Alkaff and other Muslim leaders

Vance attached a very concrete and local element to the Pope’s sweeping call to action. He and other religious and environmental leaders hosting a press conference declared that passing a proposed Clean Jobs bill in the Illinois legislature is one way the Pope’s call to action should be answered.

“The encyclical provides an opportunity for a game-changer, bringing this conversation to a whole new level,” said Vance. “I’m talking about the bill downstate in Springfield that deals with clean air, clean energy and clean jobs. The pope is absolutely correct, we are responsible and the onus falls on us.”

That same evening 90 miles north in Milwaukee, the Islamic Environmental Group of Wisconsin, also known as the Wisconsin Green Muslims, gathered to break the Ramadan fast together while also talking about a spiritual obligation to care for the earth, in part by reducing carbon emissions and embracing a more sustainable lifestyle.

Local leaders described how the Islamic Society of Milwaukee –one of nearly 30 mosques enrolled in this year’s national Greening Ramadan campaign – has overhauled its buildings with LED lights, skylights, a green roof, motion sensors and special faucets to conserve energy and water. Energy efficiency is one of the requirements to be recognized as a Greening Ramadan Mosque in the national campaign, in addition to food and water conservation, using green products and reducing waste.

A crowning achievement for the Islamic Society of Milwaukee would be installing solar panels on the 107,000-square foot roof of the society’s largest building, leaders say.

But this will be difficult to do financially given the solar policies instituted by We Energies, including increased fixed charges on customers with solar installations and a low rate for solar energy sent back to the grid.

Protecting the environment has long been a tenet of many faiths, from indigenous spiritual practices around the globe to the world’s major organized religions. Today, faith-based action on clean energy has the power to influence individual behavior and also government policy. These two snapshots show how different faiths are embracing this role, and also how long the road can sometimes be.

The Clean Jobs bill would create about 32,000 jobs in Illinois, according to proponents, by increasing the state’s commitment to renewable energy and energy efficiency. A study by the Union of Concerned Scientists found it would spur $23 billion in clean energy investment and lower consumer bills by a total of $12 billion over 15 years.

The bill has widespread support — including from interfaith groups and religious leaders — but it also faces competing bills backed by powerful energy interests and a state budget crisis that is consuming the legislature’s attention.

Meanwhile the Wisconsin Green Muslims also are up against powerful forces in trying to promote clean energy.

In partnership with the Cleaner Milwaukee Coalition, they were among the scores of organizations and individuals who filed comments opposing We Energies’ proposals.

“Our biggest wish is to enable houses of worship and people of faith to install solar energy systems on their properties, however, the requested change in this rate case appears to make this goal very difficult to accomplish,” said Wisconsin Green Muslims founder Huda Alkaff in comments filed with the Wisconsin Public Service Commission.

Despite massive public opposition, the Public Service Commission approved most of the utility’s proposals.

“Call me a pessimist,” said Lucas Johnston, an associate professor of religion and environmental studies at Wake Forest University, who does not think the Pope’s encyclical or other messages by religious leaders will have much effect on policy. He notes that four top Republican contenders for the 2016 Presidential election and 60 percent of white Catholics in the U.S., according to a recent Pew Research Center study, do not accept the idea that humans are causing problematic climate change.

“The pope joined a long line of religious leaders, including the Dalai Lama and others, who have been talking about climate change for some time,” Johnston said. And yet, national and international progress on the issue has been slow and plagued with political gridlock.

“Statements from high-profile individuals are more often symbolic than they are pragmatic, I’m not sure how much they filter down,” to government actions or the beliefs of regular people, said Johnston. “Remember the official Catholic Church position is that birth control is impermissible,” yet it is widely used by Catholics.

Muslim leaders at the Milwaukee event said educating their base about sustainability and clean energy has been a slow process, in part because they are working with immigrant communities from the Middle East, Burma and Somalia who are dealing with other socioeconomic issues.

“We’re trying to make people aware, it takes time, it’s a work in process,” said Islamic Society of Milwaukee executive director Othman Atta. “Once people see a clear benefit, they go for it.”

Johnston said that, “as a scholar there is not a lot of data that points to there being any past real trends” where religious leadership influenced environmental policy or distinct behavioral shifts. “But as a father I have hope we can get past all the differences and come to an empathetic, ethical understanding” of how to live sustainably.

Though progress may be slow, it’s clear that faith-based leadership and awareness-raising can impact the views and practices of people from a range of spiritual traditions.

Brian Sauder, executive director of the Chicago-based group Faith in Place, sees the Pope’s encyclical as bolstering and inspiring faith-based movements that are already in action, and helping break through the partisan political divide that has stymied clean energy and environmental policies.

“We see this as a celebratory moment, to have an international popular figure really champion the message is a great joy for us,” Sauder said. “We hope to amplify that message…to overcome these walls that divide us, to let that moral message lead us forward.”

At the Ramadan dinner in Milwaukee, people spoke passionately of the commitment to moderation and conservation that is inherent in Islam, and how that can translate to clean energy.

“In every aspect of our faith there’s an emphasis on moderation, and there’s a special focus on the environment,” said Nabil Salous, an officer of the Islamic Society who oversaw the energy efficiency overhauls. He pointed to the Prophet Muhammad’s message to conserve water in washing for prayer even when one is on the banks of an abundant river. “You are trustees of the environment, it’s at the heart of our faith.”

But energy and water are intrinsically connected, Alkaff noted, so through water the group is able to educate members about climate change and energy issues. A Ramadan calendar created by the Wisconsin Green Muslims lists different ecological goals for each day, including moderating your thermostat, supporting renewable energy investments and joining the climate justice movement.

“We know water is sacred and scarce, so from there it’s easy to move into climate issues, and also the issue of climate refugees,” Alkaff said. “It’s important for people to see the whole picture and connect the dots.”

Alkaff noted that in November 2014, as part of the Midwest Week of Climate Action, Wisconsin Green Muslims had more than 200 Milwaukee Muslim youth participate in a “Cut Carbon Pollution” photo petition campaign in support of the EPA’s Clean Power Plan.

The Islamic Environmental Council of Wisconsin is a member of Interfaith Power and Light, a national group that began in the late 1990s as an Episcopal effort and grew into an interfaith mission to address climate change. Interfaith coalitions and activism have been deeply involved in promoting clean energy across the Midwest.

“It’s a micro-lab of the potential we have to overcome our differences and do things together,” said Sauder. “We might disagree on 99 percent of the issues from our different faith traditions, but we share our common home and a desire to take care of it on behalf of our children.”

Many faiths embrace both a commitment to protect the earth and also its most vulnerable residents. These two sentiments increasingly converge as environmental justice movements have grown and evidence accumulates regarding how climate change will disproportionately impact poor and marginalized people around the globe.

Social justice along with environmental stewardship has been a unifying theme of interfaith efforts around clean energy. Pope Francis’ encyclical depicted environmental sustainability and economic justice as intertwined struggles, in keeping with his defining focus on poverty and his identification with the poor.

Johnston points to the Pew study showing that in contrast to white Catholics’ skepticism of human-driven climate change, 60 percent of Latino Catholics in the U.S. do see climate change as a problem caused by man. He suggests that this could be related to the fact that underdeveloped areas in Latin America, and lower-income, more vulnerable people in the U.S., are likely to be hit harder by the effects of climate change.

Johnston points to the fact that in general, Americans have experienced “a growing disaffection with traditional sources of religious authority,” and are increasingly likely to define spirituality on their own terms “and cobble together their own spiritual frameworks.”

“The most important movements toward ecological awareness and political traction that we’re seeing are not coming from the major world religions,” said Johnston. “They are coming from the margins, from the periphery, from cultural groups who are manufacturing new and different ways to be.”