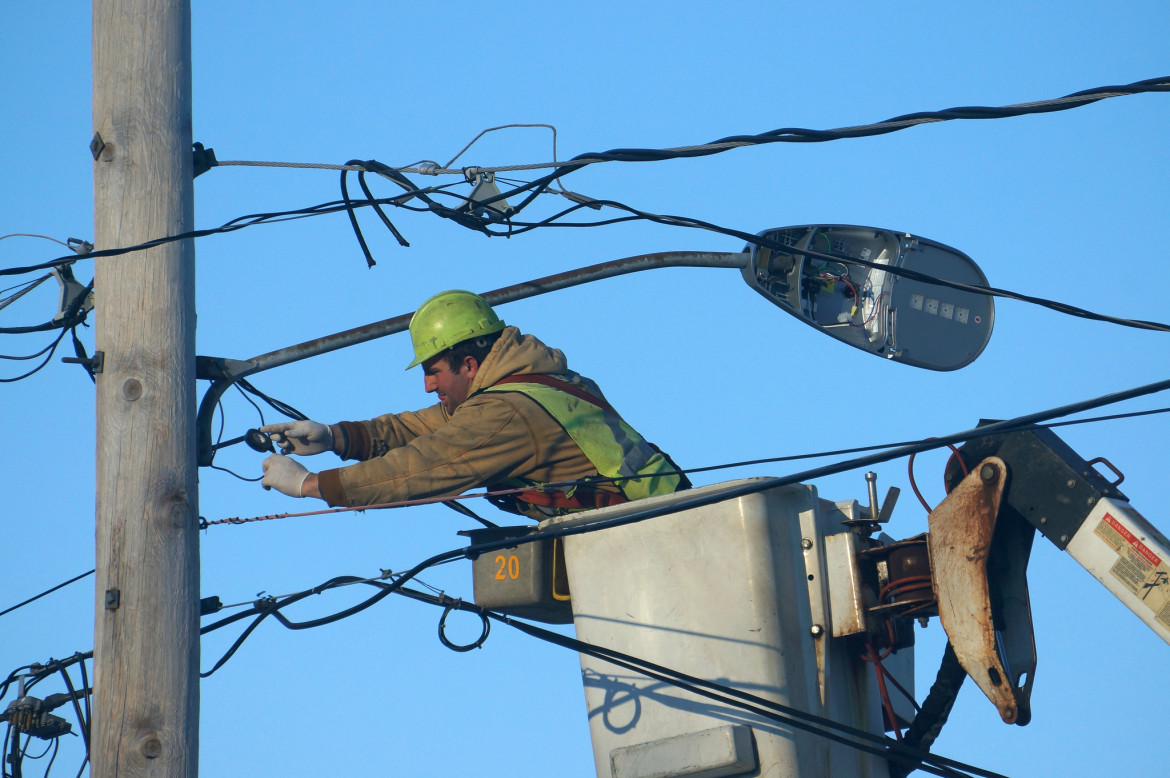 A battle is brewing in the Michigan Public Service Commission over the rate DTE Energy will charge municipalities to operate LED streetlights. At least one municipal official is calling for cities to take over their streetlights altogether.

The issue is part of a larger rate case, DTE’s first in four years. The utility is seeking increased rates to cover the cost of environmental compliance and new generation capacity. A decision is expected in the fall.

Buried within that case is a proposed increase for operating municipal LED streetlights, with a concurrent reduction in rates charged for less-efficient high-pressure sodium fixtures.

“Rates for the most commonly installed LED wattages served by overhead wires are proposed to rise between $18 and $23 annually,” says Rick Bunch, director of the Street Lighting Consortium for the Southeast Michigan Regional Energy Office. “Rates for equivalent high-pressure sodium fixtures, the most common incumbent technology, are proposed to drop between $12 and $33 annually.

“Many lower-wattage high-pressure sodium fixtures will actually become cheaper than their LED equivalents, even though they use significantly more electricity.”

“What [DTE Energy] is trying to do is protect their revenue,” says Bunch. “They are a regulated monopoly. [In exchange for] being protected from competition… they basically get a defined return on their investment… a revenue requirement. They are trying to keep making the [same amount of money] even if everyone goes over to LED’s.”

Dave Norwood coordinates sustainability for the City of Dearborn and is co-chair of the Urban Sustainability Directors Network’s LED Streetlight Workgroup. He says municipal ownership of streetlights may be a better option than the tariff structure now being proposed by DTE Energy.

“Were looking for the best scenario for the residents of Dearborn and southeast Michigan, so we have to look at municipalization of streetlights to see if that makes the best economic and environmental sense,” says Norwood.

In 2014, the City of Ypsilanti finished converting all of its streetlights to LED. The upfront costs weren’t insignificant, but DTE Energy worked with officials to arrive at incentives and a rate that made it affordable.

The project started in 2011 with a pilot program in the city’s historic Depot Town. The new lights were popular with residents and saved the city money on electricity. So the city expanded the pilot.

“We got a tremendous return on investment; less than 5 years,” says Lange. “People didn’t realize how faded and deteriorated our streetlights were. They cast ugly yellow light and were getting weaker, because they wear out over time. The LED is really a clean white light.”

The project seemed like a win-win; the city would save money on electricity, and residents would enjoy better lighting.

“It was a big hit,” says Lange. “We extrapolated it out. If a little bit of something is good, a lot of something must be great.”

So the city moved forward, finishing conversion of the rest of the city’s streetlights in 2014. To fund the upfront costs, officials assessed a fee on each of its 4,812 taxable parcels at a rate of $57 per year for 2 years to generate $550,000 for a conversion program. Lange estimated the project would be paid off within five years and save an estimated $120,000 for the city annually.

“We were very happy,” says Lange. “Everybody hates taxes, but the people put up with the special assessment, and we considered it a giant win.”

But in December 2014, the new rate case was filed.

“Then they come in and say, ‘Oh no, we were only kidding,’ ” Lange recalls. “‘The rate that we told you, which you’re saving all that money on, that was only for fun.'”

In the end, DTE’s new rate structure would end up costing the City of Ypsilanti about $22,000 more per year. But to Lange, that’s real money.

“That’s absolutely hogwash,” Lange says. “That’s bait and switch. They lied to us.”

Who owns the lights?

While DTE Energy owns most of the municipal streetlight infrastructure in its territory, some cities own and operate the lights themselves.

Nate Geisler is an Energy Programs Analyst for the city of Ann Arbor. He says the city began converting the over 2,000 lights it owns to LEDs back in 2007. During road construction projects, the city requests DTE remove streetlights it owns, later installing its own LED fixtures.

In his testimony before the MPSC, Geisler demonstrated that the City of Ann Arbor operates the streetlights it owns more cheaply than those operated by DTE Energy.

“Under the new option, when DTE owns the infrastructure, the proposed rate is $25.65 per month,” says Bunch. “Under the proposed rate for city-owned infrastructure, in which DTE supplies electricity only, the rate is $1.76. The roughly $24 difference in monthly cost is DTE’s lamp charge — basically what they charge the city to use the fixture, lamppost and wiring. It’s comparable to a leasing fee. It turns out that cities can spend a lot less on those things if they own the assets themselves.”

Conversion to LED lights across the nation tends to progress more quickly when the lights are municipally owned, according to George Woodbury, a former DPW manager in Lexington, Massachusetts. Woodbury helped craft the language for a statute adopted by Massachusetts in 1996 providing for cities to buy back their streetlights from investor-owned electric utilities.

Since then, he’s consulted for municipalities wanting to take over their streetlight infrastructure, and helped get similar legislation passed in Maine and Rhode Island.

“The vast majority of utility companies do not offer LEDs, and more than half that do charge more for an LED than for the fixture it’s going to replace,” says Woodbury. “When you start looking at it from [a utility’s] perspective on how to protect the interests of investors and ratepayers, it’s easy to come to the conclusion that [LED lights] could be more expensive. [Municipalities] can take the risk that utilities can’t. If you’re the one bearing the risk, and you’re in the business of making money, you’re going to overestimate the cost. Municipalities don’t have to do that; they’re not in the business of making a profit.”

So far, according to Woodbury, investor-owned utilities have been resistant to giving up ownership of municipal streetlights.

“It’s a cash cow for them,” he says. “Typically street lighting load is less than two percent of total load, but has a very high rate of return. And it helps subsidize the crews. If you’ve got street light work, then you have something for crews to do.”

Bruce Kinzey is director of this Department of Energy’s Municipal Solid-State Streetlight Consortium, which launched in late 2009 to facilitate spending on green streetlight technology under the American Recovery and Reinvestment Act. He says investor-owned utilities face a split incentive when it comes to LED streetlights.

“From their perspective, they’ve made large investments,” Kinzey says. “This has definitely been a revenue stream for them. They’ve put in the poles and the trenching and the wiring and the lights. In most cases they are maintaining them and the cities are paying for this. Now these cities have been hearing about LED lighting. They want to reduce their costs. Cities want to be able to say, ‘Hey we’re going green.’

“But from the utilities’ perspective, they say ‘Well we’ve got a perfectly good, operating system here. The technology is old, but everything is still working. We don’t see spending millions of dollars to go in and replace all these working lights with something that is going to cut our revenue stream as necessarily a good idea.'”

According to Bunch, there are many reasons why cities may want to convert their streetlights to LEDs. In addition to the fact that they consume about a third of the amount of electricity as conventional high-pressure sodium lights, provide superior lighting quality, have less light pollution and longer-lasting bulbs, they provide a platform for smart city systems.

“You can use them for emergency services to indicate where an emergency vehicle is supposed to pull out, or make them strobe to show people the emergency evacuation route if there’s a natural disaster,” he says. “You can change the color of the light, if you want a festive holiday ambiance downtown. You really can make them the backbone of a smart urban system.”

The time for change is now, says Kinzey.

“There are things that need to change because of pressing, external influences, like climate change,” he says. “We need to get more efficient. The technology is there. It’s ready for prime time.”

But for Lange, it all comes down to making investments that make financial sense for the city. He doubts he would have proceeded with the project under the new rate structure, and is hoping the MPSC will allow the city to be “grandfathered in” under the old rate structure.

“We could handle a 5-year return-on-investment,” says Lange. “We can’t handle a 7-year ROI. Under this new rate structure, we wouldn’t have converted any of our high-pressure sodium lights.”

Nina Misuraca Ignaczak is a metro Detroit-based freelance writer who covers energy and urban planning and policy topics. She may be reached at ninaignaczak@gmail.com. Follow her on Twitter @ninaignaczak.