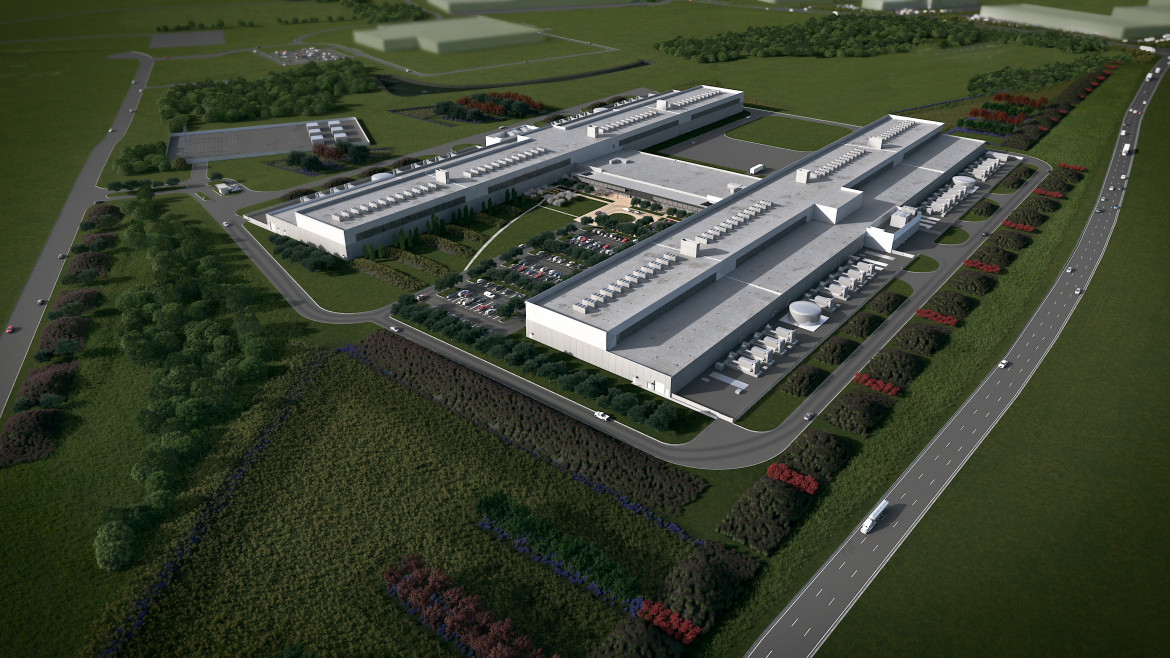 Texas beat out the competition with other states to attract a new data processing facility for Facebook. Facility rendition courtesy of Facebook.

Both witnesses slated for a meeting with Ohio lawmakers on Monday want the state to scrap its clean energy standards altogether—a move that supporters of the law say would cause Ohio to miss out on investments and job growth.

The final scheduled meeting of the state’s Energy Mandates Study Committee will come less than two weeks after Facebook announced its decision to locate a new data center in Fort Worth, Texas, instead of in Columbus, which had reportedly been under consideration for the facility.

And while Amazon committed last month to site new cloud computing facilities in Ohio, the company announced this week its commitment to buy wind energy for those operations from a new Iberdrola Renewables wind farm to be built in North Carolina.

Under Ohio Senate Bill 310, increases in the state’s renewable and energy efficiency standards are currently frozen until 2016 while the committee is charged with reviewing their costs and benefits. Meanwhile, critics of SB 310 say the freeze and other actions by Ohio’s lawmakers have already caused a drop in investments within the state.

Advocates of repealing the standards note other factors are at work in the siting decisions, and claim the laws raise energy costs and lead to economic and job losses in other sectors.

Scheduled to speak at Monday’s meeting are Greg Lawson of the Buckeye Institute and Ryan Yonk of Utah State University and Strata Policy, also in Utah.

“We generally don’t think government mandates or subsidies are a good thing.”

“We generally don’t think government mandates or subsidies are a good thing because they intervene with the market,” said Lawson, who described the Buckeye Institute as a free-market think tank.

The Buckeye Institute is one of 62 member organizations of SPN, the State Policy Network. Associate members listed on SPN’s website include the American Enterprise Institute and the corporate-funded American Legislative Exchange Council (ALEC).

SB 310 co-sponsor Bill Seitz (R-Cincinnati), who has frequently invoked Stalin in his denouncements of the standards, sits on ALEC’s board of directors and is scheduled to speak in a panel discussion on “Renewable Energy Mandate Reform” at the group’s annual meeting in San Diego next week.

The Center for Media and Democracy claims ALEC, SPN and the American Enterprise Institute all have ties to Charles and David Koch, billionaire political activists who have pushed efforts to repeal state renewable energy standards across the country.

When a state adopts renewable energy standards, “you’re mandating where the energy resources come from rather than letting the market decide,” said Lawson. “There’s a lot of costs that are sort of ignored because of the subsidy issues” in having ratepayers cover any extra costs for meeting the standards, he continued.

“There’s also a lot of costs relative to infrastructure and other generators, because of the intermittent capacity that displaces coal power” and potentially natural gas in Ohio, Lawson added. In his view, such “hidden costs” will “drive up energy prices across the board.”

Yonk and his colleagues at Strata Policy and Utah State University have likewise argued against Ohio’s renewable portfolio standards. An April 2015 report from the group claims that if the standards stay in place, Ohioans will pay roughly $1.9 billion more for electricity, lose out on about $52 million in investments, and forego up to $258 million in personal income by 2026. That same month, Newsweek ran an article on “the true cost of wind power” by Yonk’s cofounder at Strata Policy, Randy Simmons.

The American Wind Energy Association (AWEA) and other groups have criticized both reports, saying that Strata Policy’s experts relied on outdated data, ignored subsidies for other types of energy and failed to account for the benefits of job growth, avoided costs from pollution, and other factors.

The full Strata Policy report shows that 16 of the 31 states in that analysis adopted their standards between 2005 and 2009—the same time period when the Great Recession of 2007 to 2009 hit. That economic downturn has generally been tied to a financial crisis that resulted from the bursting of a housing bubble, bundling of bad debts and other banking practices.

In contrast to the views of Lawson and Yonk, supporters of Ohio’s renewable portfolio standards have said that rolling them back would cost the state’s ratepayers billions of dollars in extra electricity costs and cause Ohio to miss out on millions in investments and thousands of jobs.

Most recently, the Columbus Dispatch reported that Columbus lost out to Fort Worth, Texas, on the siting of a new Facebook data center, which will be powered by wind energy. Wired reported that arranging a renewable energy deal for the energy-intensive center was easier in that state than elsewhere.

“The Amazon deal is pretty telling,” Nichols said. “It’s a billion dollar investment [that will create jobs for] 100 employees, and we’re happy that they chose Ohio.”

Lawson says a repeal of Ohio’s clean energy standards should not affect the state’s ability to attract and keep good jobs.

“To have a company come in and say it has a corporate policy and so the state needs to bend all its policy around the personal preference of the company, I think, is a misguided thing,” Lawson said. “How many jobs are you going to lose from corporations that are already here in Ohio?” he asked, if companies close because energy costs get too high. “Those are trade-offs that are real problems.”

Much of the energy for the new Amazon project will likely come from Indiana and North Carolina. Iberdrola Renewables started planning for the North Carolina project about five years ago.

“In North Carolina, as in Ohio, policies that encourage renewables send a clear signal to businesses evaluating investment opportunities and hoping to expand,” said Paul Copleman at Iberdrola Renewables. “The first phase of this wind farm in North Carolina represents a roughly $400 million investment on our part.”

A January 2015 position paper from the Buckeye Institute claimed that any investments that might be lost from ending Ohio’s clean energy standards “will ultimately stay in Ohio,” shift to other industries and “allow more job creation and economic growth for the State in the long run.”

However, other evidence suggests that states compete with each other to attract jobs and economic growth and that clean energy is an increasingly important factor in that competition.

“We’ve heard directly from many… executives that their companies are increasingly investing in clean energy to save money, improve resiliency, and become more sustainable—and that state and federal policies often play a role in these private-sector investments,” said Phyllis Cuttino at the Pew Charitable Trusts.

For example, in 2013, Iowa’s vast wind energy portfolio helped it beat out neighboring Nebraska for a $300 million Facebook data center, prompting Nebraska lawmakers to seek ways to improve the market for wind energy in their state.

“More and more multi-national companies are committing to use renewables to power their facilities,” noted Samantha Williams at the Natural Resources Defense Council (NRDC). In her view, meeting those commitments becomes harder when states adopt laws like SB 310 and House Bill 483. That law basically tripled setbacks for wind turbines.

“Facebook found a friendlier state to call home rather than jump through Ohio’s hoops.”

“Ohio needs its clean energy standards back if the state hopes to keep attracting these big ticket data centers,” Williams said. “Why throw up roadblocks to this sort of investment like last year’s freeze bill and the wind setbacks? Facebook found a friendlier state to call home rather than jump through Ohio’s hoops.”

“Companies care about renewable energy, and Ohio needs to get with the program or they may be on the losing end more and more often,” added Gail Parson at Environmental Entrepreneurs (E2), a nationwide group of business leaders affiliated with the NRDC.

“Our jobs report showed a scant 1.5 percent job growth for renewables companies in Ohio, which indicates lots of room for missed opportunities,” said Parson. “The national job growth in wind and solar is markedly higher. According to The Solar Foundation annual job report, the solar industry grew 21.8 percent from November 2013 to November 2014. According to the International Renewable Energy Agency, the U.S. wind sector saw jobs in the wind industry increase by 43 percent in 2014.”

A January 2015 report by the Pew Charitable Trusts confirmed that investments in Ohio’s clean energy businesses had dropped dramatically since Ohio lawmakers began debating changes to the state’s standards in 2013.

“Our research at the federal and state levels has consistently found that businesses need stable policies to continue innovating and competing in the growing global clean energy economy,” Cuttino said. “Where uncertainty exists, private investment in clean energy has suffered.”

“Molded Fiber Glass Companies, headquartered in Ashtabula, once produced spinners for wind turbines in Ohio, but has since moved those operations to other states with more favorable clean energy policies and abundant wind resources, such as Texas and California,” she said. “Iberdrola Renewables, developer of Ohio’s largest wind farm, has indicated uncertainty about its future operations in Ohio due to unstable state and federal policies.”

“In a January 2015 panel discussion on our research, Ohio business leaders from established and new companies alike—including Dovetail Solar and Wind, Nextronex [Inc.] and WHE Generation (now Q2Power)—indicated that they were starting to see greater opportunities in other states with more stable policies,” Cuttino continued.

“Some clean energy companies will continue to come to Ohio no matter what, due to its talented energy workforce and experience in manufacturing—but the state’s potential could be more fully harnessed with stable policies that encourage clean energy deployment,” she added.

And while both the Buckeye Institute and Strata Policy object to clean energy standards as subsidies, Amazon’s May choice of Ohio for its cloud computing facilities was reportedly sweetened by millions of dollars of financial incentives in the form of land, tax abatements and other benefits.

Ohio’s state and local governments often offer various financial incentives that could be viewed as subsidies in order to attract businesses and investments. However, the details of those incentives are often not made public.

“We don’t talk about economic development deals or incentives to keep Ohio’s competitive advantage versus other states,” Nichols said.