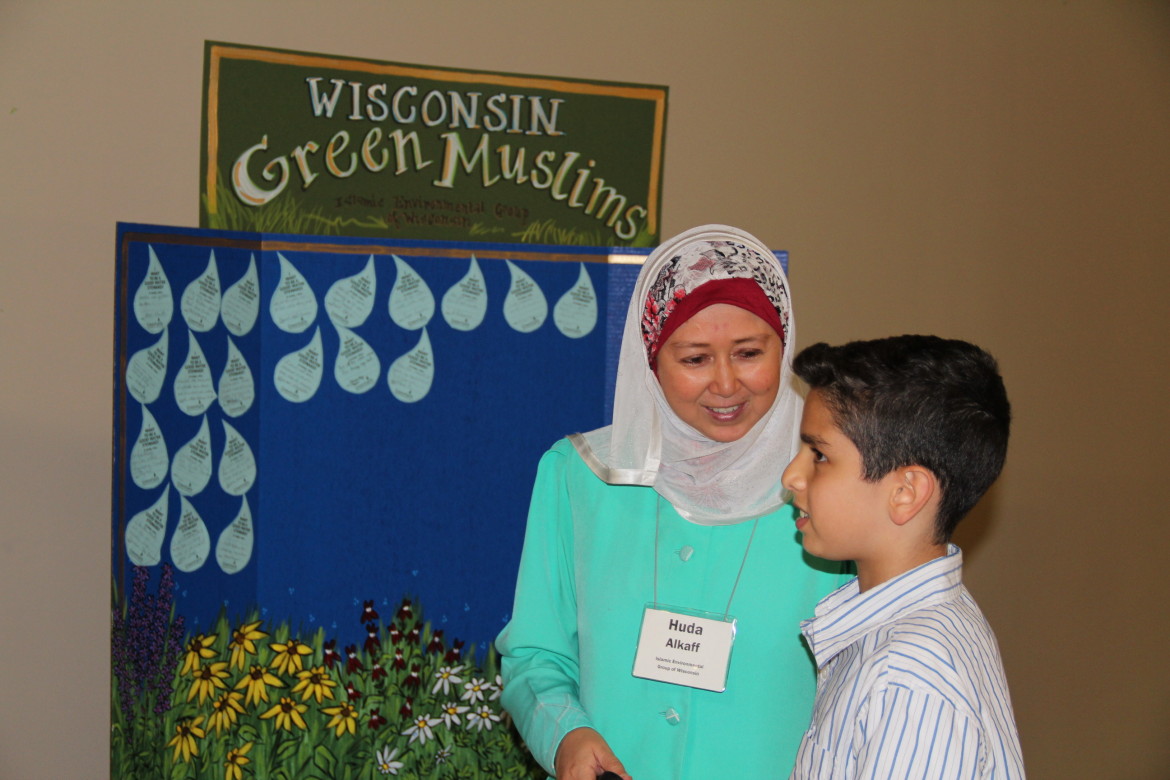 On June 22, Huda Alkaff circulated among the crowd of men, women and youth at the Islamic society of Milwaukee gathered to break the Ramadan fast after sunset and to talk about climate change, water and how to live a more environmentally sustainable existence.

The event was hosted by the Islamic Environmental Group of Wisconsin, or Wisconsin Green Muslims, a volunteer group that Alkaff founded in 2005 and now directs. The group educates the Muslim community and the general public about Islamic environmental teachings, in order to apply these teachings in daily life and to form coalitions with others working toward a just, healthy, peaceful and sustainable future, Alkaff explained.

The enthusiasm, curiosity and commitment to these issues on display that humid, stormy night in Wisconsin was a window into a larger local and national movement Alkaff has helped spark and shape.

Today Alkaff is among 12 faith leaders around the country being honored by the White House as Champions of Change, who “have demonstrated clear leadership across the United States and around the world through their grassroots efforts to green their communities and educate others on the moral and social justice implications of climate change,” as a White House statement said.

U.S. Environmental Protection Agency Administrator Gina McCarthy and Senior Advisor to the President Brian Deese will honor the champions at the event today at 2 p.m. Eastern time, which will be live-streamed.

She’s also a founding member of Wisconsin Interfaith Power and Light, which trains and mobilizes people of all faiths to fight climate change by promoting energy conservation, energy efficiency and renewable energy. She serves on the national Interfaith Power and Light Campaigns Committee, the national Greening Ramadan Task Force and the Milwaukee Environmental Consortium Board of Directors.

Midwest Energy News spoke with Alkaff about climate change among Muslim communities and her leadership work.

Midwest Energy News:How did you get involved in environmentalism and energy issues?

Alkaff: Believe it or not, I have been an environmentalist since I was a child. Back then, I remember being asked the famous question from the adults in my family and my teachers, “What do you want to be when you grow up?” Remember that question? To everyone’s surprise, my answer was “An ecologist, an environmentalist!” I was and still am fascinated by nature and all its inhabitants, and I wanted to learn more about them, and the connections between them.

I earned a double major degree in chemistry and biology, but was yearning for a more interdisciplinary field of study. Ecology is the study of interconnections and interdependence among everything in space and in time. This was my higher education investment.

The continuous attempt at establishing connections and gaining holistic network insights is the driving force for my ongoing work to build strong and sustainable bridges between the environmental teachings in Islam, other faiths and spiritualities and my university environmental training and education.

Why are faith leaders so important to the larger effort to address climate change?

People of faith have a great responsibility to stand up for climate justice and address the concerns and calamities of the poor and marginalized communities, those with the lowest ecological footprints, yet they are the most impacted by climate disasters. It is a moral issue, and the interfaith voice standing united for climate justice and care of creation is instrumental in mobilizing the faithful for the common good.

What kind of impact do you think this year’s Green Ramadan has had in Wisconsin or beyond?

I think this year’s Green Ramadan was more successful than any previous years, mainly because it became a national campaign, with 35 mosques in 17 states participating. This means tens of thousands of Muslims participated either directly or indirectly, with an overall greater reduction in their ecological footprints.

Have you or Wisconsin Green Muslims been able to reach people in the community who weren’t previously aware of or concerned about climate change and how they can make a difference?

People have different interests and we try to meet them where they are.

Yes, by designating a certain theme each month, we align our limited capacity with a larger event that provides resources, and enables us to reach a wide variety of people and interests, while tying to the theme of the month, whether it is water, food, fair trade, energy, recycling, peace or environmental justice to climate change. People have different interests and we try to meet them where they are. We tie their interests and concerns to the effect of climate change, while facilitating simple ways that they can make a difference.

We do outreach with environmental programs to formal and informal Islamic schools, for K-12 students, college students, teachers, parents and other adults, and we were able to make connections to climate change causes and impacts.

Why do you think the message of sustainability and reducing carbon emissions has resonated with Muslims in Wisconsin?

The message of sustainability should resonate with Muslims everywhere, not just in Wisconsin., because the Islamic environmental teachings are abundant in the Qur’an (the holy book for Muslims) and the Hadith (the reports and sayings of the Prophet Muhammad, peace be upon him).

For more than a decade now, Wisconsin Green Muslims have been providing a variety of educational activities for all ages connecting faith and sustainability, and this sincere and tireless effort should produce results in the community.

How does the Wisconsin Green Muslims’ focus on water issues also dovetail with taking action on climate change?

Water is mentioned numerous times in the Qur’an and Hadith with an abundance of stories, wisdom lessons and insights. Water is a sacred and scarce resource, and it resonates with the Muslim community that climate change effects water. There is drought; negative impacts on food production; extreme weather events, such as tsunamis, floods, hurricanes, monsoons; as well as increased water temperatures, sea level rise, decline in fisheries. The spirituality, beauty and preciousness of water touch the heart, and lead to sincere and passionate water and climate conversations, and a strong will for climate action.

This year, we already had several one-on-one and group water and climate conversations as part of a larger Midwest Faith Climate Conversations project, at which we address the issues of climate, justice and peace, and the issue of climate refugees that highlights the urgency of this global problem.

Do the Wisconsin Green Muslims deal with both mitigation and adaptation to climate change? While encouraging people to reduce their carbon footprint, are you also advising people on how to handle the impacts of climate change?

Our volunteer effort mostly deals with mitigation, but we collaborate with other organizations that address actions to deal with heat waves, floods and other climate change-related emergencies.

Does a faith approach help further the international nature of the need to address climate change? In other words, since there are Muslims all over the world, does approaching this from a faith perspective help people view climate change as something that affects people across borders and must be addressed collectively?

We talk about how the Muslim world is the most affected by climate change, in terms of droughts, increased temperatures, heat waves, decline in food and water resources, increase in price of needed goods, sea level rise, floods, freshwater contamination, and extreme weather patterns that hit the poorest the hardest, such as typhoons, tsunamis, monsoons, hurricanes that destroy a large number of innocent lives and livelihoods. We point out how our collective impact is needed to reduce our carbon footprint here in the U.S.A., to be part of the global solution.

How do you feel about the White House recognition?

Editor’s note: An earlier version of this story misstated the number of people to be recognized at the event. It is 12, not 13.