Photo By
Susan Waughtal for CERTs 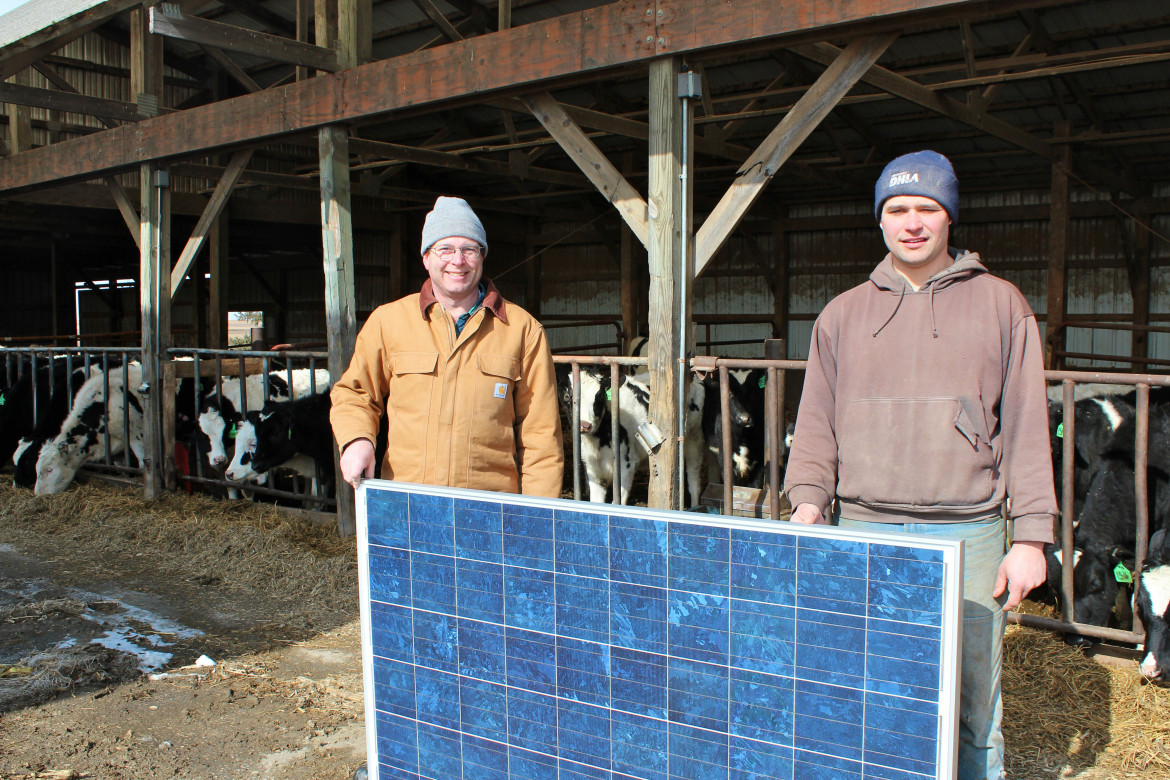 Tim Gulden of Winona Renewable Energy and farmer Nathan Gibbs with one of the panels to be installed on Gibbs' cow barn.

The electricity bills for a sprawling 1,400-cow dairy operation in the tiny hamlet of Cottonwood, Minnesota recently led the owners to start looking for ways to cut costs.

“We have multiple barns and we get power from a co-op that doesn’t have off-peak utility rates,” said Steve Landwehr, general manager of Alpha Foods, LLC. “They want us to use as much power as possible.”

With the help of a 25 percent rebate from the United States Department of Agriculture’s Rural Energy for America Program (REAP), Alpha Foods will spend around $63,000 installing LED lighting.

“We’re looking to reduce our energy use and we think the LEDs will do that,” Landwehr said.

Farmers and small rural businesses who have participated in the program over the years have worked closely during the application process with the Minnesota Clean Energy Resource Teams (CERTs).

Fritz Ebinger, who oversees the program, said it builds upon CERTs’ pass successes.

“It’s been a wonderful program for producers in getting distributed generation and alternative energy out there,” he said. “It helps agricultural producers address production cost and maintain profitability.”

CERTs’ role is to help a client create an energy assessment and assemble an application.

“Our job is work with agricultural producers and rural businesses to implement both energy efficiency and renewable energy projects,” he explained. “Some people have an idea of where to start with energy improvements but they don’t know quite what their resource is or what the best first investment is.”

Farmers and businesses should be able fill out the applications themselves for smaller projects, he said, but his office ends up offering plenty of guidance because of the extensive paperwork required.

The REAP funding generally takes care of only 25 percent of the cost.

“They pay the rest through cash, through loans or through grants,” he said.

Originally REAP focused on grain drying and ethanol operations. Lately the projects have moved to solar PV because of the dropping costs of installations.

“Solar has begun to make sense as a way to reduce energy costs,” said Ebinger.

One early CERTs solar PV client was Eric Angvall’s hardware store in Lester Prairie, a town of 1,700 located 50 miles west of Minneapolis. Angvall received help on the REAP application before hiring Innovative Power Systems to install a 10.28 kilowatt solar PV project on the store in 2010.

The project cost $80,000 but with money from REAP, Xcel’s Solar Reward program and state and federal credits Angvall’s cost came to only $11,000.

“In 2012 I had an extra $350 because the panels produced more electricity than I needed,” he said. “When I look at the past five years I’ve paid no electric costs because of the panels.”

Angvall figures the he’s saved enough, after five years, for the project to have paid for itself. The panels should last another 20 to 30 years, he said, and continue to produce enough power to keep the lights on at the more than 100 year old hardware store without much of a utility bill to pay.

Angvall said the project has engendered plenty of discussion a and “helped convince more people to look into solar.”

One of those who signed on to solar was Fred Holasek, owner of Holasek Flower Power Garden Center in Lester Prairie. He and Angvall had discussed wind power before discovering the REAP program and seeing that solar PV could be installed on their buildings.

And the city’s local wastewater treatment installed a 40 kW solar project, said Angvall, who is also Lester Prairie’s mayor. “That was a neat deal,” he said.

The town’s school district is considering whether to join a community solar garden, Angvall added.

Alpha Foods bought lights for the Cottonwood Dairy from Paul Streitz, who runs Lumen Pros. The old lighting cost the company nearly $33,000 annually, while the new LED lights will run just around $12,000. Over a decade the savings will be $210,000, he said.

“Farmers run their lights 18 to 20 hours a day,” Streitz said. “By continuing to use inefficient lighting they’re throwing money down the drain. Better lighting can make these farms more profitable and more efficient.”

One of those who understands that argument is the owner of Blue Line Travel Center at the busy intersection of I-90 and Highway 60 in Worthington. Larry Potter owns the 24-hour-a-day truck stop with his wife, Deb.

With a growing energy bill, Potter figured he should look at new lighting options, especially the highly efficient LEDs.

“Our electricity bill was getting so high and I’d heard that LEDs could be an energy saver for us,” he said.

Potter looked first at conventional financing for new lighting through his bank and found little appetite for it. After attending a Rural Minnesota Energy Board discussion of PACE (Property Assessed Clean Energy financing) and REAP in 2012, Potter figured he had found an answer to paying for the new lighting.

Working with certified energy manager Richard Otten, the Blue Line established a proposal that would replace outdoor lighting – on the canopy, wall and perimeter – with LEDs.

The Potters used REAP and PACE financing to pay for the $73,942 project, and also received a rebate from Worthington Public Utilities. After the lighting was installed in 2014, the Potters say the savings are higher than they expected.

“We found we’re actually closer to saving $2,000 a month by having LEDs,” Potter said.

“It’s unbelievable how much better the light is, especially at night,” he said. “REAP has been a good program for us.”

It may not be the last relighting project for Blue Line, either. The stop has a cafe and deli, as well as indoors showers and a lounge. They may soon be lit by LEDs, he said.

The Potters were the first business in southwest Minnesota to use PACE, attracting a visit by Sen. Al Franken, a huge champion of the program.

At a ribbon cutting ceremony Franken lauded the Potters for the project, saying such retrofits for creating jobs and promoting clean energy.