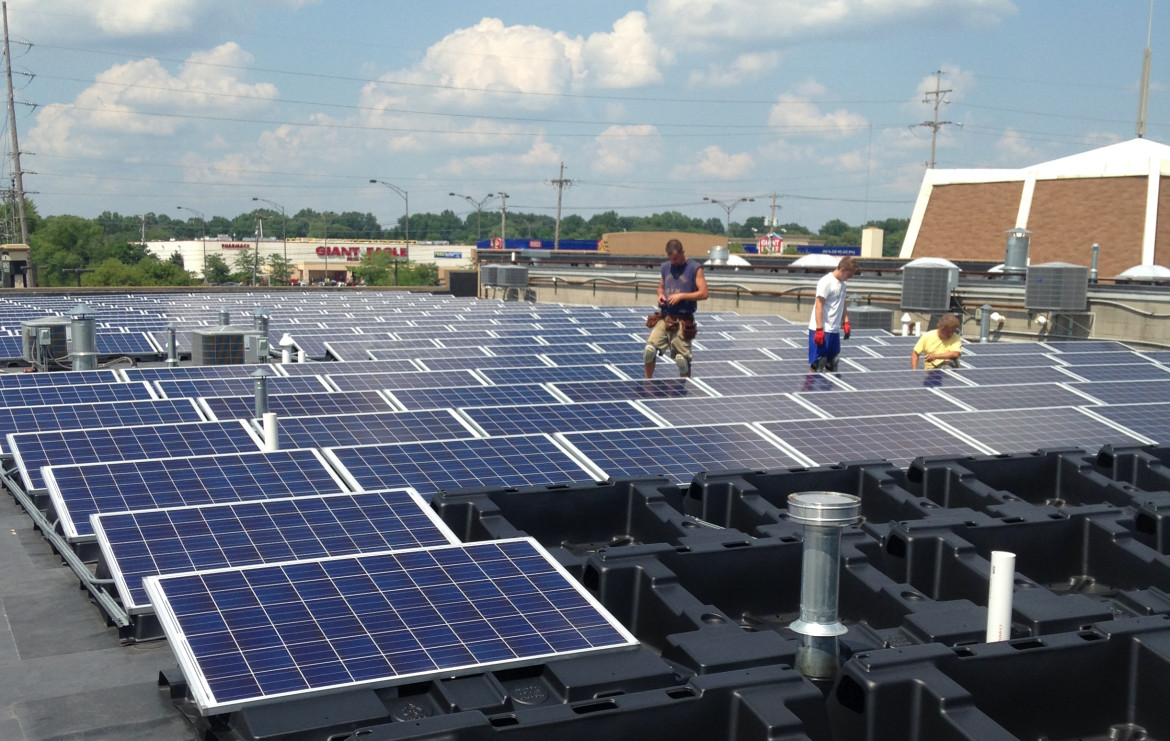 Raphael's School of Beauty installed solar panels at its Boardman, Ohio location with the help of the Ohio Energy Loan Fund. (Courtesy photo)

With the help of an Ohio energy program, a Youngstown-area cosmetology school has launched an effort that will substantially reduce electricity usage and save money. But the company’s owner doesn’t intend to stop there.

Ralph Delserone III, owner and CEO of Raphael’s School of Beauty Culture Inc., has installed 365 solar panels with a total capacity of 85 kilowatts atop a 17,000-square-foot building at its campus in Boardman. He also added new automated lighting controls, four skylights and swapped out the building’s four existing water heaters for high-efficiency heat pump units.

The business borrowed $240,000 from Ohio’s Energy Loan Fund at 3 percent interest. Including funds of his own, Delserone invested a total of $340,000, and anticipates a payback within 15 years. He also took advantage of the 30 percent federal tax credit available for installing solar systems on commercial properties. Construction on the project began in January 2014 and was completed in February.

“I believe we will cut our energy costs by 80 percent,” he said. The upgrades are expected to save up to $20,000 a year. The company plans to soon install solar arrays at its four other campuses, all of which are in northeastern Ohio.

“I’m interested in green energy, and the ability to offset energy costs with free sunshine,” he said. “Being able to borrow money at a low interest rate and get a tax credit was attractive. Our students are keen on protecting the environment, so we thought this was a good complement to our educational programs.”

The agency recently announced a new round of funding totaling $11.25 million. The loan program was launched in 2012 with $7 million in state funding through the Advanced Energy Fund, as well as federal funds from the State Energy Program and the American Recovery and Reinvestment Act. Since then it has made $40 million in loans, said Penny Martin, the agency’s public information officer.

The current program has its roots in the Energy Efficiency Revolving Loan Program, which was established in 1999 by state Senate Bill 3, and was funded by a rider, or fee on electric utility bills until Dec. 30, 2010. The rider was not to exceed $100,000 over the 10 year period.

The goal of the fund, which targets small businesses, manufacturers, nonprofit organizations and public entities, including school districts with revolving loans, is “to improve energy efficiency by reducing the amount used and thereby reducing costs,” Martin said. Job creation and retention are also part of the objective.

‘When schools districts improve energy efficiency, that saves the taxpayer money in the long term.’

“The hope is small businesses will reinvest in their companies, and when schools districts improve energy efficiency, that saves the taxpayer money in the long term,” Martin said. “A cornerstone of the program is that applicants demonstrate to us how they will save 15 percent of their energy usage as a result of the measures they complete.”

This is achieved by providing an American Society of Heating, Refrigerating and Air Conditioning Engineers (ASHRAE) energy audit, certified by an engineer or architect licensed by the state. Through the life of the loan, borrowers will be required to file annual reports. However, quarterly reports, including the amount of energy saved, are required for the first year after the efficiency measures are completed.

“Our agency is committed to accountability,” Martin said. “We’re using taxpayer dollars, so there are reporting requirements.”

The agency has marketed the new lending round by contacting parties who expressed interest after last year’s funds were committed. It has also sent information to organizations such as the Ohio Manufacturers’ Association and the National Federation of Independent Business.

Determinations on how much money the agency will have available for loans from year to year depend on state budgeting allocations and the amount that comes back to it in repayments.

“We want the pot of money to be sustainable,” Martin said. “We want to make sure we have resources available to help our clients.” But the agency’s task doesn’t stop at making loans, she pointed out. Staff members also offer pointers and advice, free of charge, on ways businesses and nonprofits can conserve energy.

“If they don’t know how to go about doing an energy efficiency program, we want them to call us,” she added. “We have the ability to identify ways they can improve and perform an energy audit. We want to help. Our focus is customer service.”

Bill Spratley, executive director of Green Energy Ohio, said he welcomes the loan fund particularly during a period when state Senate Bill 310, which temporarily curbed the state’s renewable energy standard, has cast a pall of uncertainty on the industry itself.

“We welcome any state incentives because we haven’t seen much at the state level lately,” he said.

‘I’d say it’s probably on the order of 1 percent to the good compared to the damage SB 310 has done.’

The bill took effect in the spring of 2014 and placed a two-year freeze on the standards, which were set in 2008, stipulating that 25 percent of electricity sold by in-state utilities was to come from alternative sources, with half of that fraction generated from renewables. Under the freeze, the renewable energy mandate stands at just 2.5 percent. A legislative committee is reviewing the standards.

Ned Ford, energy consultant to the Sierra Club’s Ohio chapter, agrees with Spratley that the loan fund is advantageous, but that it’s overshadowed by SB 310.

“I’d say it’s probably on the order of 1 percent to the good compared to the damage SB 310 has done,” Ford said. “But it’s difficult to quantify. If you believe the freeze is only for two years, that’s one thing. If you believe it’ll last, that’s another thing.”

Martin emphasized that SB 310 is separate from the Energy Loan Fund and did not influence it.

“It had no effect whatsoever on the program,” she said.

Connie Lewis is an Ohio-based freelance writer who has an extensive background covering business beats at various newspapers across the country. She may be reached at: conniemarylewis1964@gmail.com