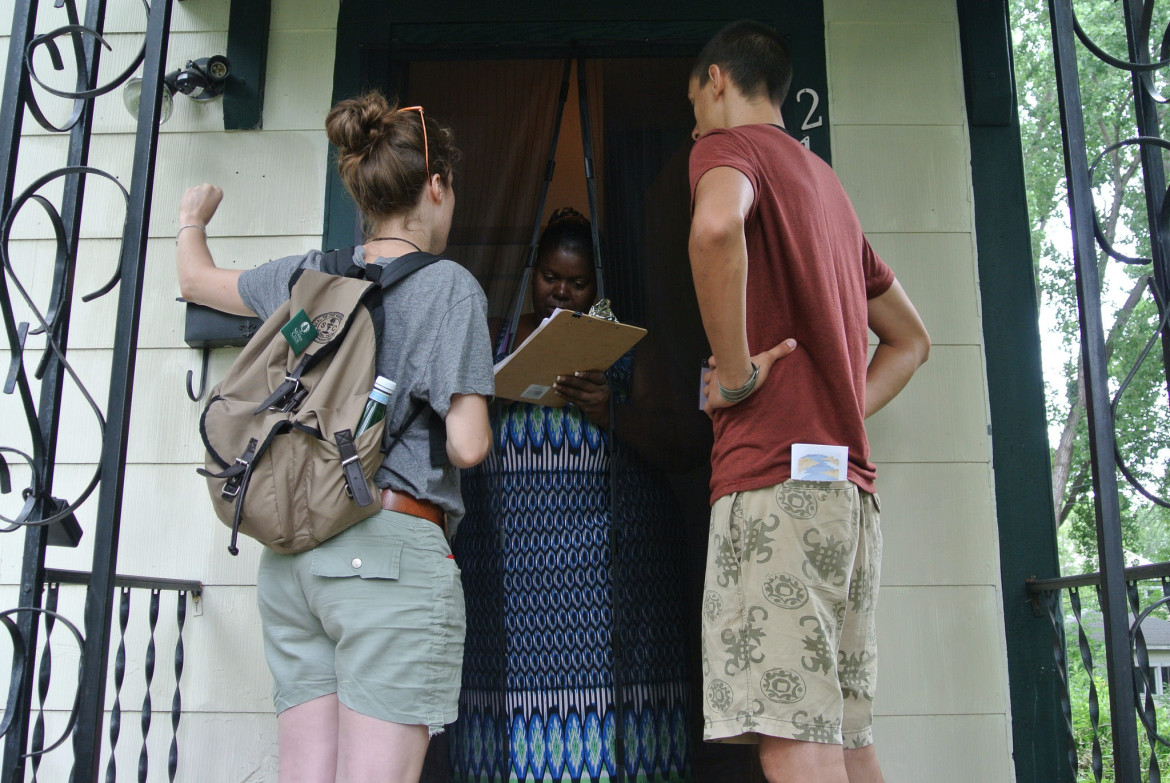 On the roof of the Shiloh Temple International Ministries in the heart of a largely African American community in north Minneapolis, a new solar community garden may soon take shape.

Unlike other solar gardens, which in Minnesota have largely been proposed in rural or suburban sites, the Shiloh site is right in the middle of a dense urban neighborhood that has a reputation for crime and limited economic opportunities for residents.

Yet at the same time the area is showing signs of revival, among them a plan to capitalize on Minnesota’s growing solar garden movement.

The more than 200 kilowatt (kW) solar garden project is the culmination of a goal by a faith-based nonprofit to develop community solar in a disadvantaged community and use the project for job training and employment creation.

Minnesota Interfaith Power & Light (MNIPL) and the Sierra Club were among the lead organizers.

Solar activists sought out a church to partner with on the project because many neighborhood residents are “more comfortable working with faith-based communities,” she said.

Julia Nerbonne, executive director of MNIPL, said her organization helped pull together volunteers to create The Just Community Solar Coalition around six months ago with the idea of building a community solar garden in north Minneapolis.

‘All these community solar installations will create jobs and we’re trying to make sure communities of color are part of that.’

It asked for proposals from solar developers in April and accepted one from Minneapolis-based Cooperative Energy Futures.

Part of the effort was intended to use community solar as a way to create education and job opportunities as well as give North Side church members and residents a break on their utility bills.

Community solar on the North Side, home to the city’s garbage burner and some heavy industry, gives residents a glimpse of the potential for clean energy, she said.

A door-to-door campaign in Minneapolis has begun to inform neighbors of the benefits of community solar garden subscriptions, and groups have been tabling at the church and different community events.

So far, the coalition partners have knocked on 500 doors and gathered the names of more than 170 homeowners who expressed interest in subscribing to community solar gardens.

The solar installation is expected to produce enough electricity to power 50 to 60 homes, and Nerbonne is confident all the subscriptions will be sold.

The project has a preference for Shiloh congregants and north Minneapolis residents, she said. To avoid seeing economically disadvantaged residents barred from community solar due to low credit scores, the coalition has come up with a novel financing twist.

Should residents fail to make payments, faith-based institutions who are subscribers would simply increase the size of their subscriptions. Since solar gardens allow for subscribers to purchase 120 percent of their annual energy needs most institutions will have plenty of leeway to add more solar power to their energy mix if needed, she said.

The first targets for the solar garden campaign are Shiloh congregants, MNIPL members and North Side residents. If subscriptions are still available later the rest of the city will be invited, Nerbonne added.

Clients can either pay for the full subscription or a monthly fee that will still save them money when compared to traditional energy bills, Nerbonne said.

The solar garden contracts are for 25 years but should any subscribers pay the full freight of a subscription they could be in for substantial savings, said Cooperative Energy Futures general manager Timothy DenHerder-Thomas. The cost of a full subscription – that would offset all of a homeowner’s energy use – will be roughly the equivalent of 10 to 11 years of electric consumption, he said.

The calculation is based on a three percent increase in annual energy costs, said DenHerder-Thomas. The result would be potentially years of little to no electricity costs should some subscribers take that route. If they move or become ineligible they will receive a pro-rated refund, he added.

Bishop Richard D. Howell, Jr., the leader of the Pentecostal church, said the solar garden “is a great project for our community as well as for the North Side community,” he said. “This is what we call going green while helping preserve the environment and our resources.”

Arnetta Phillips, who does community outreach for the 1,200-member church, said several congregants are interested in subscribing to the solar garden and others, who do not live in the neighborhood, have begun to explore putting solar panels on their roofs.

The church is reaching out to local businesses, too, to consider subscribing to the solar garden, she said. More informational meetings are being held to tell residents and businesses about the project and the potential job opportunities, said Phillips.

One of the project’s unique characteristics is a collaboration between the solar developer Cooperative Energy Futures and Renewable Energy Partners.

The installation will be an opportunity to train north Minneapolis residents, many of whom struggle to find work, for positions in the solar industry.

“We’re seeing it as workforce training for low income communities,” said Jamez Staples, who owns Renewable Energy Partners. “The goal is to train between 150 and 200 solar workers who will be able to get jobs in the industry.”

A grant will help pay for the training and Staples has begun recruiting people to participate in the program. He’s decided to team with the local nonprofit construction training organization Builders Institute on his program, and may invite other partners to participate, too.

Training will lead not only to jobs in the solar industry but to positions with investor-owned utilities and in other energy fields, Staples said. People of color are woefully underrepresented in renewable energy circles, if his own experience is any indication.

‘When I go to [clean energy] events and conferences I’m one of the only, if not the only, African American.’

“When I go to events and conferences I’m one of the only, if not the only, African American,” he said. “We need to change that. We need more people of color working in the renewable energy space.”

Cooperative Energy Futures has focused mainly on residential solar installations and has done 43 projects, according to DenHerder-Thomas.

The Shiloh project is Cooperative Energy’s first foray into community solar and a rare opportunity to show how the power could be distributed to people of all income levels.

The array will be between 210 and 235 kW, DenHerder-Thomas said. While it’s larger than most solar arrays that have sprung up on churches in the Twin Cities over the past year, it stays under a solar garden rate structure that pays more 1 cent per kW more for installations under 250 kW.

The array will fill up the entire roof of the 30,000 square foot church, which takes up a significant portion of a city block, DenHerder-Thomas said. Cooperative Energy plans to finance the project itself using tax equity and debt financing.

North Minneapolis residents are “pretty aware and excited about solar but they assumed it was too expensive for them to do right now,” he said. “Once we talk to them about subscriptions they begin to see how they will save money.”

One of those hoping to save money is Bishop Howell. The church pays $5,000 or more a month for heating and cooling.

“I’ll be more excited about the project when I see our utility payments going down,” he said.

Editor’s note: An earlier version of this article misstated the size of the church’s roof.