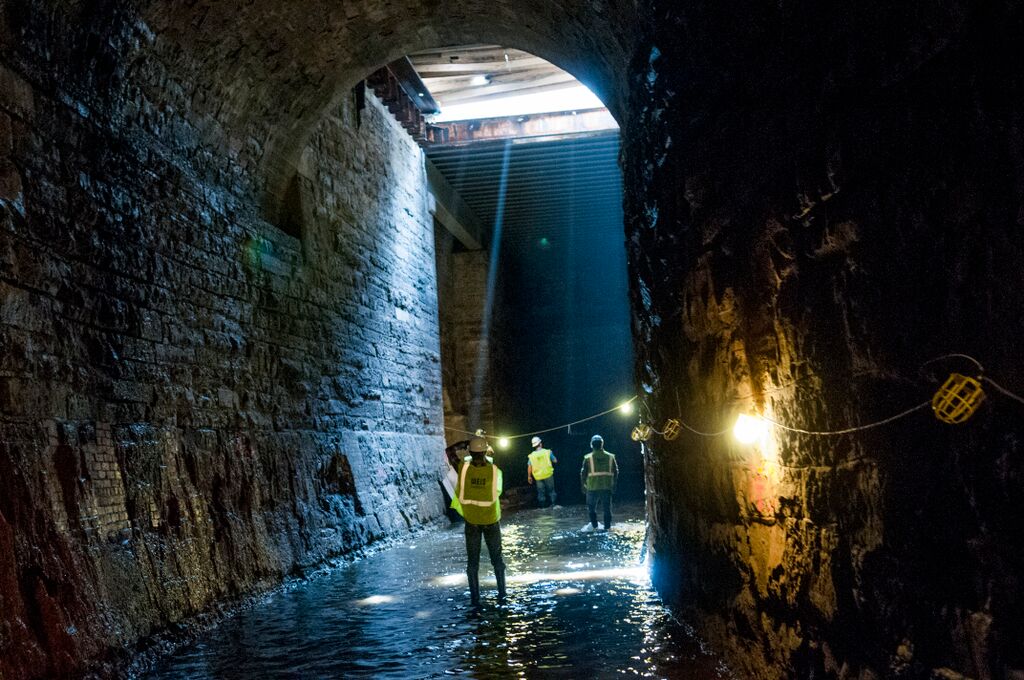 As a historic Minneapolis mill is converted to housing, tunnels beneath the structure will return to service providing hydropower.

When residents turn on the lights in the A-Mill Artist Lofts overlooking the Mississippi River in Minneapolis next year, some of their electricity could be generated just a few floors below them.

This month, construction workers plan to begin installing a 600 kilowatt (kW) turbine generator in a basement of the former Pillsbury A-Mill, which at one time was the largest flour mill in the world.

“We expect the system to provide a substantial amount of power to our building, probably 70 percent of our energy needs,” said Neal Route, associate with developer Dominium.

The A-Mill project is a short walk from St. Anthony Falls, which once generated power for saw, textile and flour mills that fueled Minneapolis’ economy for many decades. Industrial operations diverted the river to underground channels on both sides to power their milling operations.

The A-Mill Artists Loft will reuse one of those tunnels. A new pipe will be placed in the concrete and masonry tunnel – an arched corridor, 24 feet tall and 18 feet wide – to transport water to a drop shaft in the A-Mill.

From there, the water will descend 40 feet down to power a turbine, which spins 600 times a minute to create electricity.

“You can capture a lot of energy from that drop,” Route said.

The $156 million A-Mill project opens 251 artist housing units next year. Built in 1881 and operated by Pillsbury for many years, the sprawling mill in Southeast Minneapolis stands today next to renovated historic buildings on the city’s lively Main Street and adjacent to new apartment buildings that have sprung up during the city’s long-standing construction boom.

The hydropower project, being overseen by Weis Builders, will not immediately yield great savings for the apartment building.

“It’s a break-even operation for us,” said Route, who declined to reveal the price but suggested it was a substantial investment. “At the end of the day we’re not making money on the hydro but we are creating an environmental benefit by producing clean energy for use by our residents.”

Dominium is hoping its sensitive redevelopment and focus on renewable energy and efficiency will help the building to be certified LEED (Leadership in Energy and Environmental Design) gold or platinum by the U.S. Green Building Council.

‘I love the project because it brings together historic preservation, conservation, clean energy and the city’s goal for growth.’

Minneapolis council member Jacob Frey, who represents the area, wrote a letter supporting the project and says it’s a perfect fit for what the city is focusing on for the future.

“I love the project because it brings together historic preservation, conservation, clean energy and the city’s goal for growth,” Frey said. “With this kind of very old and historic building its often very difficult to make it energy efficient and to have it use green energy.”

The A-Mill project sits on a stretch of river long known as the heart of hydropower in Minneapolis. Xcel Energy still marshals the waterpower of the only falls on the Mississippi, operating a 13.9 megawatt hydro plant installed in a nearby stretch of the river. In front of the A-Mill the University of Minnesota runs an internationally known research facility that often studies hydro projects.

Hydro still attracts investors to downtown Minneapolis. A-Mill is just the farthest along of three proposals that use the city’s central waterfront district to divert water from the Mississippi for hydropower.

Pillsbury A-Mill is a National Historic Landmark, one of only two dozen in Minnesota. By being in a location so rich in history and near several parks the project underwent an extensive examination by a large number of governmental bodies.

No major issues or complaints came forward, said Route, except for concerns about bats which hibernate in the A-Mill and in a nearby cave under Main Street.

While the DNR ruled against requiring an environmental impact statement, it raised the bat issue in comments. During construction of the plant points of access will be created for bats to continue flying into and out. “They will be able to come and go as they please,” Route said.

Friends of the Mississippi River (FMR) offered the project “conditional support,” according to policy advocate Alicia Uzarek. The river advocacy organization would like to see a “public benefit from using a public resource,” she said.

An example is a nearby park supported by Xcel Energy, Uzarek said. Although the site is too dangerous and deep to allow for tours, there are plans for viewing areas where visitors can peer into the inner workings for the hydro plant, Route said.

The nearby Mill City Museum is collaborating with Dominium on creation of a potential interpretative area, he added.

The other issue raised by FMR involved maintaining optimal water levels at St. Anthony Falls, Uzarek said. The A-Mill could be asked of reduce its operations if the amount of water going over the falls substantially decreases.

Xcel has been conducting a study of optimal levels at the falls for several years, Uzarek added. In a letter FMR praised the project for providing a “non‐polluting, climate-friendly energy technology that could be actively promoted and interpreted in this popular, active part of the city.”

The A-Mill project has come much closer to fruition than a proposal by Crown Hydro, which has drawn much more ire from environmentalists, river advocates and historic preservationists in a more than decade-long debate over the project.

With FERC threatening to pull Crown Hydro’s license, the company offered a slight modification to its proposal to construct a more than 900 foot long underground tunnel through a fragile, historic area of the river.

Symphony Hydro, meanwhile, proposes a novel hydropower facility located in the St. Anthony Lock, which was closed earlier this summer to thwart the spread of Asian carp.

Both proposals require 1,000 cubic feet of flow per second, or several times the flow of the A-Mill project.

The A-Mill has an advantage in having had a hydro operation for decades. During the hydro turbine’s heyday it produced electricity for two other mills.

Now it awaits one more approval from FERC, an action made a bit more imperative by a deadline to qualify the project for tax credits.

“We’re not quite there yet but we’re close,” said Route. “We have guys on standby waiting for final regulatory approval. We need to be done with construction by the end of the year.”