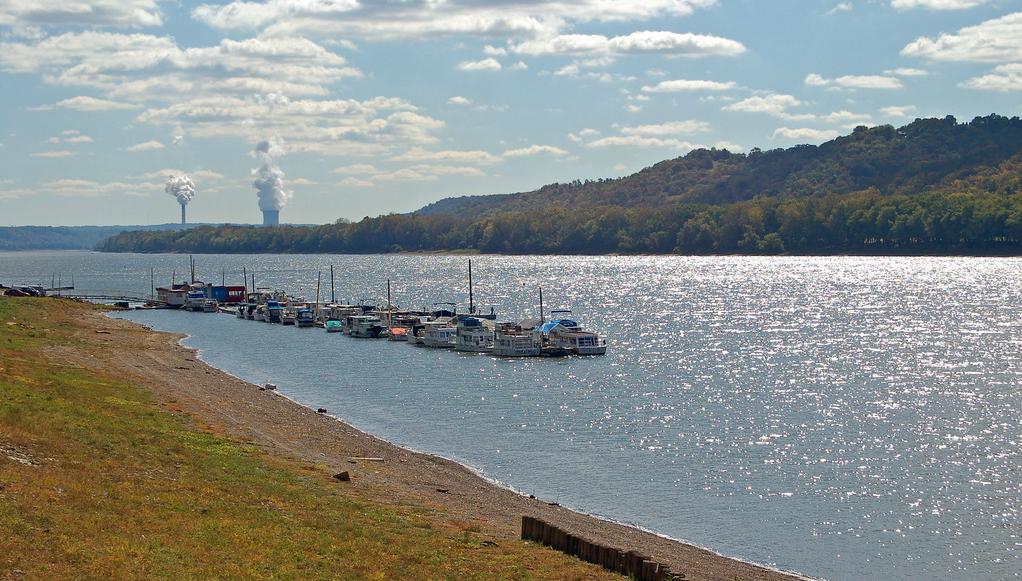 The Ohio River near New Richmond, Ohio, with the coal-fired Zimmer Power Station in the background.

A 12-year extension allowing power plants and other industrial polluters to exceed mercury standards as wastewater enters the Ohio River could be stretched out even further, if a proposal before an interstate regulatory board is approved.

The question before the Ohio River Valley Water Sanitation Commission (ORSANCO) is whether dischargers should continue to be allowed to use “mixing zones” for high levels of mercury that will be diluted downstream to levels meeting the standards.

ORSANCO adopted a ban on the practice in 2003, but provided a ten-year compliance period that was later extended to this year. The agency plans to decide whether to grant another extension, along with other issues, at its meeting on October 8.

Environmental groups and their members object strongly to the proposed change, on the grounds that dilution does not remove health risks because mercury can build up, or bioaccumulate, in living organisms.

Various electric utilities, chemical companies and other manufacturers, and POTWs generally favor the ORSANCO proposal. Some would go even further to eliminate the ban against mixing zones altogether.

Mercury is a “potent neurotoxin,” said Madeline Fleisher, an attorney with the Environmental Law & Policy Center (ELPC) in Columbus, Ohio.

Exposure to a form known as methylmercury is particularly harmful to fetuses, infants and children because it can damage the developing brain and nervous system. However, the U.S. Environmental Protection Agency has reported that people of all ages can suffer damage to the brain, heart, lungs, kidneys and immune system from mercury.

Mercury does not break down in the environment. Because of this, mercury from lakes and rivers bioaccumulates in fish and other organisms. Basically, mercury moves up the food chain as bigger species eat smaller ones.

“Anyone who then eats that fish can suffer damage from ingesting the mercury,” said Fleisher.

Current water quality standards for the Ohio River limit total mercury to 0.012 μg/l in water and methylmercury to 0.3 mg/kg in fish tissue.

Current rules also allow the use of mixing zones to meet those limits until October 16, 2015.

ORSANCO adopted the ban in 2003, but the agency allowed a 10-year period before the rule became mandatory. The apparent aim was to give dischargers time to comply with the stricter requirements.

Instead, the deadline for each existing discharger would be “as soon as practical as determined by the permitting authority” in its state, Harrison said. New point source dischargers would not be allowed a mixing zone, he added.

The proposed changes are “not going to increase the amount of mercury” or change the designated use status for mercury in the Ohio River, Harrison said.

Without any mixing zones, however, various dischargers would probably have to reduce the concentrations of mercury in their wastewater. That would likely decrease the total mercury going into the Ohio River from point sources.

Thousands of comments have poured into ORSANCO from more than a dozen environmental organizations and their members, objecting to the grant of yet another extension, along with other proposed rule changes.

Besides ELPC, those groups include the Sierra Club, the National Wildlife Federation Action Fund, the National Audubon Society, Rivers Unlimited, the Ohio River Foundation, and the Hoosier Environmental Council.

“ORSANCO is retreating from what it had decided based on the science back in 2003, which is that these mixing zones—which are effectively allowing polluters to discharge more mercury because it’s diluted in the water—aren’t appropriate for a chemical like mercury that builds up over time in fish,” Fleisher said.

The proposal to let states decide on a case-by-case basis when each discharger should eliminate mixing zones is also a problem, she said. That variance process “basically doesn’t account for important factors like looking very rigorously at how much mercury is getting into the water and what polluters can do to lower those levels.”

Many dischargers support the proposed rule changes, however, including both industry sources and various public sewage treatment plants.

“FirstEnergy, along with many of our industry peers, supports the use of permitted mixing zones for water discharged to the Ohio River,” said company spokesperson Stephanie Walton. “Due to the large volume of the Ohio River, use of mixing zones does not present measurable adverse impacts on the environment, and eliminating those mixing zones would not result in any appreciable environmental benefits.”

FirstEnergy filed comments to this effect with ORSANCO, along with a request for a two-year variance for its 1,300-megawatt (MW) Pleasants Power Station at Willow Island, W.V., in case ORSANCO decides not to change the October 16 deadline after all.

“The variance allows time to install equipment that would be necessary to meet the new standard,” Walton said.

Comments submitted for that group likewise call for continued use of mixing zones.

The group asserts that the mixing zone ban was based on action taken for the Great Lakes, whose characteristics include deep water and long average retention times for water moving through the lakes. “The physical and chemical attributes of the Ohio River are exactly the opposite to that of the Great Lakes,” said the group’s comments.

“While ORSANCO may have looked to the Great Lakes in deciding to consider a mixing zone ban, the conclusion that a ban is necessary to avoid threats to human and aquatic health from mercury pollution is based on studies specific to the Ohio River,” Fleisher said.

“Most recently, a June 2015 ORSANCO draft study based on sampling of Ohio River water and fish showed that even the existing limit on mercury concentrations in water might not be enough to prevent dangerous levels of mercury from accumulating in fish,” she noted.

The electric industry and environmental groups also disagree about the potential for mercury “hot spots” that might result from technology to reduce mercury emissions into the air.

Environmental groups worry that utilities will wind up releasing some of the mercury removed by that equipment into their wastewater. Concentrations of mercury in wastewater might thus increase, they say.

“This industry-funded study, which is based on only 50 fish samples across 12 different locations, must be considered alongside ORSANCO’s own more extensive data, which shows a higher prevalence of fish with mercury levels above the EPA limit,” Fleisher said.

Moreover, she noted, data in the study cited by the industry group are at least five years old and don’t “capture the potentially worsening effects of increasing mercury discharges in recent years.”

The Ohio Utility Group has also asked ORSANCO to consider alternatives to the total mercury standard. Among other things, they note that it’s difficult to determine how much total mercury in wastewater would be biologically available to fish in the river.

“The devil is in the details of how you determine whether an alternative limit will in fact protect human and aquatic health,” Fleisher said. “If ORSANCO does permit utilities to pursue this approach, we would not support any alternative limit unless it results from a thorough, public process and is based on sufficient data.”

Other issues in the proposed rule changes deal with wastewater temperature limits, ammonia and other topics.

ORSANCO’s technical committee is reviewing comments and other materials on the proposed rule changes now.

“This is still in the deliberation stage,” stressed Harrison, noting that the provisions of any final rule changes could vary from the Commission’s proposal.

Once October comes, however, ORSANCO will make a final decision. The Commission is scheduled to vote on its committee’s recommendation on October 8 in Buffalo, N.Y.

“ORSANCO should not lower protections for the Ohio River without first gathering up-to-date, site-specific data that can fully support the conclusion that the increased mercury discharges allowed by mixing zones will not harm human health,” Fleisher said.