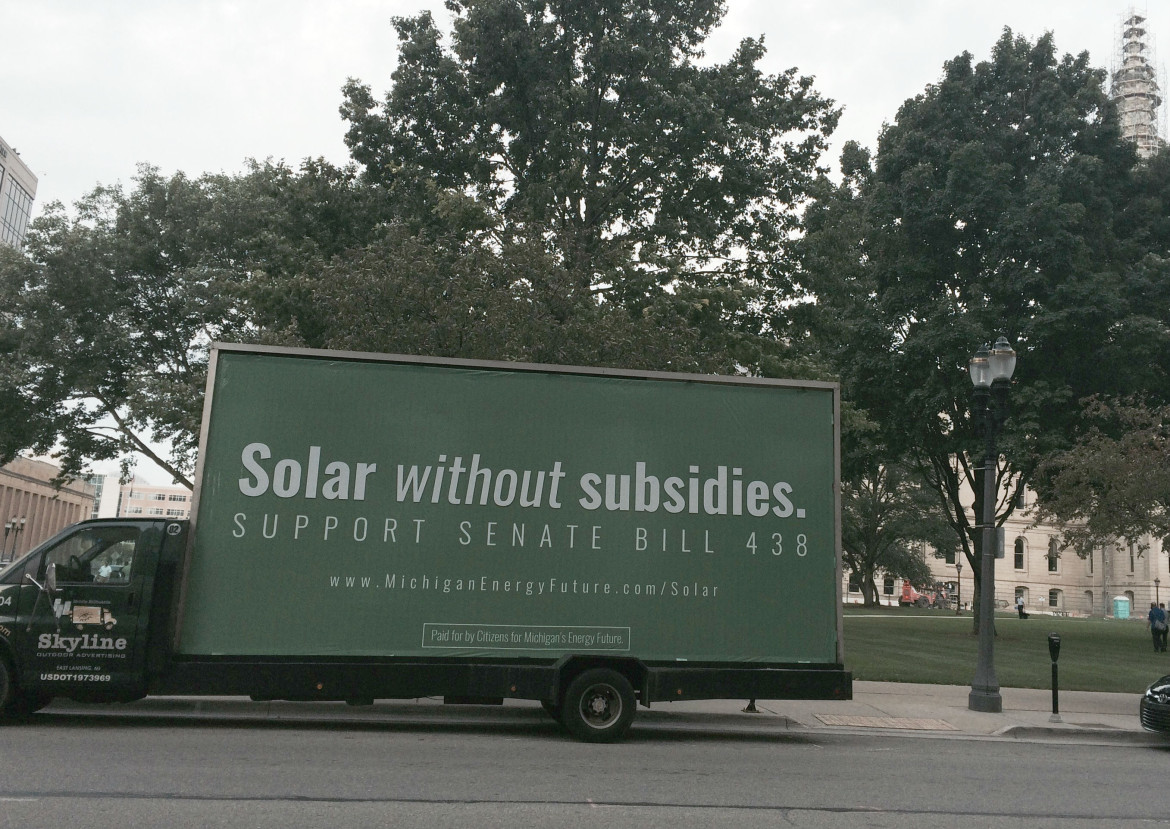 Citizens for Michigan's Energy Future, an advocacy group aligned with the state's major investor-owned utilities, paid for a mobile billboard outside of a state Senate Committee hearing on Wednesday.

Melissa Anderson, treasurer of the Plymouth United Church of Christ in Grand Rapids, Michigan, told the state Senate’s Energy and Technology Committee Wednesday she had just “cut a check” for $16,925 — the initial payment for a 10-kilowatt solar array on the church’s sanctuary.

She came before the committee to speak out against SB 438, a broad Republican-backed state energy plan that would, in part, eliminate Michigan’s solar net metering program and replace it with a policy that reimburses customers at wholesale prices after they have already bought their energy at retail from utilities.

In other words, the program would basically eliminate behind-the-meter generation.

Invoking a religious theme, Anderson said: “When we read the (bill language), we feel: How is that fair? We feel like David compared to the utilities, which are Goliath. It sounds like it may be good for utilities but may be harmful to citizens.”

Several speakers Wednesday — most of them cheered on by a gallery of supporters  — said the policy would have a chilling effect on solar installations across the state, lengthening the return on investment to the point where it wouldn’t make economic sense.

Major utilities and the bill sponsors say the current system subsidizes customers with rooftop solar at the expense of other ratepayers.

But while the subsidization question is in dispute, a common sentiment among advocates and those in the solar industry is that the bill favors major utilities and discourages individuals from generating their own energy.

“While they should pay some fair share to the grid, they shouldn’t be charged with what they generate,” said Sarah Mullkoff, energy program director with the Michigan Environmental Council. “While we commend lifting the cap on distributed systems, the termination of the [net metering] program is highly problematic.”

Under SB 438, customers with rooftop solar panels would have to buy electricity at retail rates from their utility and would be eligible to sell back up to 110 percent of what they generate — but at a wholesale rate significantly lower than the retail rate.

Bill proponents say they are increasing the current 1 percent net-metering cap to 10 percent.

“The bill allows for 10 percent to be sold back. That’s 9 percent more,” Sen. John Proos, the Republican sponsor of the bill, told Allan O’Shea, founder of Michigan-based CBS Solar, on Wednesday. CBS builds solar installations throughout the state.

“If you were to offer that perspective to your customers, I presume some customers would be very interested in 10 percent to have that much more opportunity,” Proos said.

“First of all, it goes back to the power company first,” O’Shea responded. “And at what rate? What we’re dealing with here is impedance. … This needs to go to the consumer first.”

The proposed policy has gotten the attention of rooftop solar companies and advocates from across the country, including the group Tell Utilities Solar won’t be Killed (TUSK).

Former Congressman Barry Goldwater Jr., a Republican who heads TUSK, released advertising last week criticizing the plan. TUSK’s website lists 17 states where the organization is mobilizing against what it perceives as anti-solar policies.

A recent report from the North Carolina Clean Energy Technology Center finds that at least 16 states are considering changes to their net metering policies.

Representatives from the San Francisco-based The Alliance for Solar Choice (TASC) and member company SolarCity testified Wednesday against the plan.

“It’s forcing customers to put solar in front of the meter, selling every single electron at wholesale rate,” said TASC spokesperson Amy Heart. “Being able to use your own power you produce behind the meter is essential policy not only for Michigan, but 45 other states.”

But such outside groups’ involvement has drawn criticism from Proos as well as the 501(c)(4) organization Citizens for Michigan’s Energy Future. Representatives from that group and the two major investor-owned utilities — DTE Energy and Consumers Energy — did not testify on Wednesday. The only speaker in support of the bill was from the Detroit Regional Chamber of Commerce.

Citizens for Michigan’s Energy Future had a mobile billboard parked outside the hearing near the state Capitol that said: “Solar without subsidies. Support Senate Bill 438.”

“Solar has a role to play in Michigan’s energy mix, but it must be treated fairly among other sources,” Proos said in a statement distributed by Citizens for Michigan’s Energy Future after Wednesday’s meeting. “Solar does not need to be artificially propped up with government mandates and net metering customers do not need to be subsidized by other rate payers. Ultimately, we have to do what is best for Michigan, which means utilizing the best resources available to create a fair, affordable energy policy for Michiganders.”

But advocates dispute claims that there is cross-subsidization going on, or at least point out that bill supporters haven’t been able to show to what extent it is occurring.

Committee chairman Mike Nofs, the Republican who led a work group for several months leading up to the unveiling of his and Proos’ energy proposal, said he wants to “hear all testimony and ideas coming up” before considering changes to the bill.

“I have not made a final determination,” he said.

Net metering is just one aspect of a sweeping, two-bill energy package from Senate Republicans.

They also propose phasing out the state’s energy efficiency program and renewable portfolio standard. The plan would rely heavily on Integrated Resource Planning and define what it means to operate a “clean energy system” — “an electric generation technology that meets all current State and Federal air emissions regulations or qualifies under U.S. Environmental Protect Agency regulations as being carbon neutral,” according to a bill summary.

The Legislature has also seen energy proposals from Democrats and House Republicans.