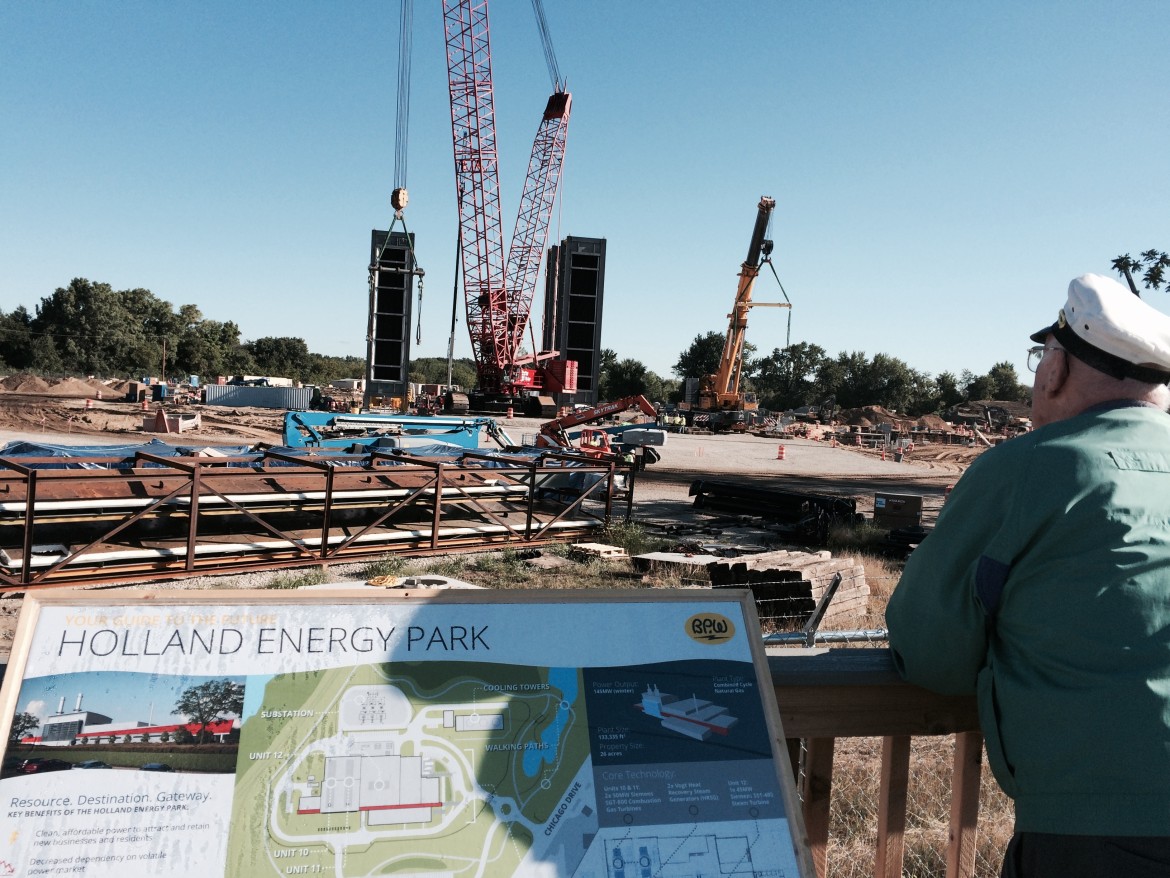 Dan Nally likes to joke that he’s not overseeing the construction of a new $240 million, 145-megawatt combined cycle natural gas plant, but rather a snowmelt plant that happens to generate electricity.

Nally, as business services director for the Holland Board of Public Works, is overseeing the small city’s transition from burning coal for power to natural gas. The BPW is a municipally owned utility that serves nearly 28,000 customers, most of whom are commercial and industrial users.

Much of the planning that went into the Holland Energy Park — a 26-acre site east of downtown that’s part power plant, part public greenspace — centered around how well it would support the city’s flagship public works project: A below-surface snowmelt system that keeps the downtown’s streets, sidewalks and parking lots free of snow and ice in the winter.

While the DeYoung coal plant on nearby Lake Macatawa now supports the system, the city will be able to expand the snowmelt system by using heat captured from the new cogeneration plant once it’s operational next year. DeYoung is scheduled to stop burning coal by March.

“Everyone is just absolutely excited we can expand snowmelt,” Nally said last week.

According to the city, it’s the largest municipally owned snowmelt system in the United States covering 405,000 square feet. The new natural-gas plant will help expand the system nearly five-fold, to 2.5 million square feet.

Compared to traditional operations of a public works department, the system has “less maintenance, you don’t bang up the streets, you don’t have corrosion from salt and it’s a huge benefit to businesses,” Nally said.

The system circulates warm water through more than 60 miles of 1-inch plastic pipes. About 1 inch of snow melts per hour at 15 to 20 degrees Fahrenheit, according to the city.

The system was built in the late ‘80s under the vision of Holland industrialist Ed Prince, who reportedly faced a wave of criticism for the idea. At the time, Prince saw it as a way to revitalize a struggling downtown.

“Not that many places are doing it, especially on a scale that Holland is,” Nally said.

More than a decade in the making

Holland’s Energy Park is a culmination of more than a decade’s worth of planning, with several key changes over the years.

The city, however, faced backlash from then-Gov. Jennifer Granholm, whose administration insisted there be no new coal plants built in Michigan, Nally said.

“We fought with the governor and environmental groups and took it to court,” Nally said. “It was just a hellacious process. We spent four years trying to get an air permit.”

After suing the state over the permit, the city got a favorable ruling from a county judge saying the state erred in not granting the permit. It was ultimately issued after Gov. Rick Snyder took office shortly after the ruling.

But during that time, the project costs had skyrocketed from $150 million to $330 million, Nally said.

“We’re a $100 million company — that’s called betting the company,” he said. “As a community, we rebooted, essentially.”

From there, the city embarked on a “community energy plan,” a 40-year vision that sought input from a diverse group of stakeholders over what and where the next investment should be.

One of the stated goals involved lowering the city’s carbon footprint, Nally said.

When the report was compiled in 2011, the city measured 23 metric tons of carbon per capita. In 40 years, it would have been 35 to 40 metric tons with a new coal plant, he said.

“That isn’t the direction we wanted to go,” Nally said. “Realistically, we should be able to get to 13, maybe 10 metric tons per capita in that time.”

Ultimately, city staff came out with a report with four recommendations: Don’t invest anymore capital into the aging DeYoung Plant; enter into two new contracts for wind power for a total of 32 MW; build a natural gas combined cycle plant; and do not build the new plant on valuable waterfront property, where DeYoung is now situated.

By the end of 2012, the City Council had nearly unanimously approved going forward with those recommendations.

Holland spent most of 2013 trying to settle on a variety of sites throughout the city. The 26 acres where the energy park is located now was made up of 61 separate parcels, owned by a variety of entities and located in two jurisdictions (Holland and Holland Township).

By February 2015, BPW issued a notice to proceed with the project.

The city issued the largest bond offering in its history for $160 million to help cover most of the costs. The remaining $80 million has been built up over the past several years through rate increases generated specifically for the project, Nally said.

On a recent Wednesday morning, a row of three cars and spectators were watching the construction hum along.

It could be a testament to the amount of community interest the project has garnered. Over the three previous days, BPW had to close off traffic while it separately transported massive, 200-ton Heat Recovery Steam Generators. Nally said spectators watched, filmed and cheered along as the equipment arrived.

“It was like a parade,” he said. “Who gets excited about a power plant?”

Herb Dakima, 87, was perched last week on an observation deck BPW built for people to watch the construction. He was waiting for the last steam generator to arrive.

“I come here everyday. Overall, I’m for the project,” Dakima said. “It is pretty cool.”

“If you’re going to build a gas-fired power plant, you couldn’t use a more careful and thoughtful approach than (Holland) is using,” Dulzo said. “The Holland Community Energy Plan is very good, and if they stick to it, they will be a beacon on this continent.”

About 90 miles east in Lansing, a similar process has unfolded on nearly the same timeline as Holland’s. The Lansing Board of Water and Light, also a municipally owned utility, was planning its future as old coal units were retired.

The utility had settled on a coal/biomass facility, but backed off those plans after backlash from the community and local environmental groups.

After what could also have been characterized as a messy process, the LBWL also settled on a natural gas cogeneration plant. It was constructed in a struggling neighborhood just south of downtown, meant to be an anchor for future development in what is now an up-and-coming part of the city.

“It’s hard for any utility to build anything these days,” Nally said. “There’s so much resistance and not much willingness these days to sacrifice any personal comfort for the larger good.

“The outcome here was outstanding. The process was messy, but when you’re done, you have consensus.”