Photo By
Courtesy of the Metropolitan Council 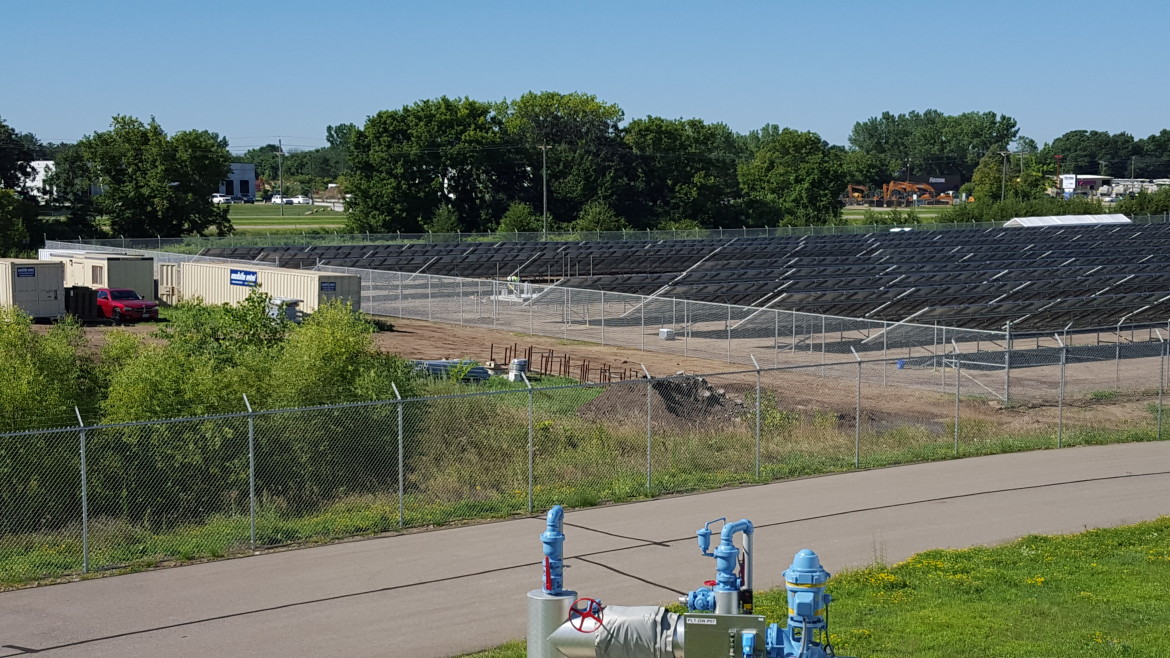 Courtesy of the Metropolitan Council

In early June, workers began the installation of a $3.5 million solar farm next to the Blue Lake Wastewater Treatment Plant in Shakopee, Minn.

It’s part of an ambitious plan by the Metropolitan Council  — a government agency dealing with mass transit, wastewater, parks and affordable housing for the seven-county Twin Cities region — to use marginal land it owns for photovoltaic solar installations. Along with Blue Lake, the council is also doing a solar farm at another wastewater facility in suburban Empire Township.

The plan also calls for community solar gardens at both sites that would largely attract other governmental units looking to offset their electricity use with renewable energy.

Blue Lake is a big step toward more solar for the area.

“It looks like our rate payers will make money in addition to supporting the region in clean energy development,” said Jason Willett, finance and energy director of the Metropolitan Council’s Environmental Services.

The Blue Lake project is being developed with Oak Leaf Energy Partners of Colorado on 10 acres of buffer land west the plant. “It’s the kind of land where putting solar makes sense because in a dense urban area we need to get multiple uses out of land,” Willett said.

The installation will produce around 10 percent of the plant’s energy needs and was paid for in part by a $2 million grant from Xcel Energy’s Renewable Development Fund. Solar energy will be used directly by the facility and account for 10 percent of the energy use.

The Blue Lake project is one of the larger government-backed solar installations in the state, along with a 3-megawatt (MW) project at the Minneapolis-St. Paul International Airport.

Solar panels are great because they don’t have noses, they don’t care.

Metro Transit, the regional transportation agency that is part of the Metropolitan Council, has also gotten into the act with solar on some of its buildings, and proposals for more.  It also has a new park-and-ride lot powered in part by solar panels.

They will continue to have “a great need for energy for years, allowing developers to sign long-term contracts with municipalities,” he said.

Part of the power generated at Blue Lake will power an operation managed by Massachusetts-based New England Fertilizer Company, which dries waste sludge and then sells it as a soil conditioner to local farmers, he said.

The dryer used by the company at Blue Lake is already fairly sustainable. The fuel for it comes in part from methane produced by an anaerobic  bio-digester located at the plant, a move that has saved the Metropolitan Council $500,000 annually in money once spent on natural gas.

The solar project makes economic sense, Willett said, especially with falling prices for panels and the need to get the project built while state and federal incentives and tax credits are still available. “This is a good deal for us,” he said.

It’s also a good use for the land. Although wastewater plants have only marginal odors today because of more sophisticated equipment, still no homeowner or business wants to locate near them.

“Solar panels are great because they don’t have noses, they don’t care,” Willett said. “And it’s a good additional use of the land as a buffer between the public and the wastewater plant.”

The Metropolitan Council has another 50 acres of buffer land available at Blue Lake that could become a community solar farm with Oak Leaf as a partner. Community solar gardens have taken off in Minnesota, with a flood of new proposals that seek both large corporate and government subscribers as well as individuals and small businesses.

The state’s community solar garden legislation allows developers to build as many as five 1 MW solar gardens at sites within the utility Xcel Energy’s territory. Each garden must have at least five subscribers and no one subscriber can take more than 40 percent of the power generated.

With those limitations in mind, the council’s Environmental Services department would agree to buy 40 percent of the power from the solar garden project if the plan goes through, with Metro Transit (also part of the Council) taking another 40 percent, Willett said.

With the Council taking care of 80 percent of the solar gardens’ output, the rest of the subscribers could come from cities and counties looking to buy renewable energy to power their buildings and operations. “We’ll have at least three other local governments participating if and when it gets built,” Willett predicted.

A second community solar proposal is to use land that is part of the Empire Township Wastewater Plant, which also has an anaerobic digestion operation. Environmental Services and Metro Transit would again serve as anchor tenants for that solar garden, Willett said, while the rest would be marketed to government agencies.

There’s competition in Empire Township, where  Geronimo Energy has also proposed a community solar garden nearby.

Environmental Services and Metro Transit are collaborating on other solar proposals to power their internal operations. What gets Willett excited is the potential for the agency to build community solar that benefits not just the Metropolitan Council but other government subscribers.