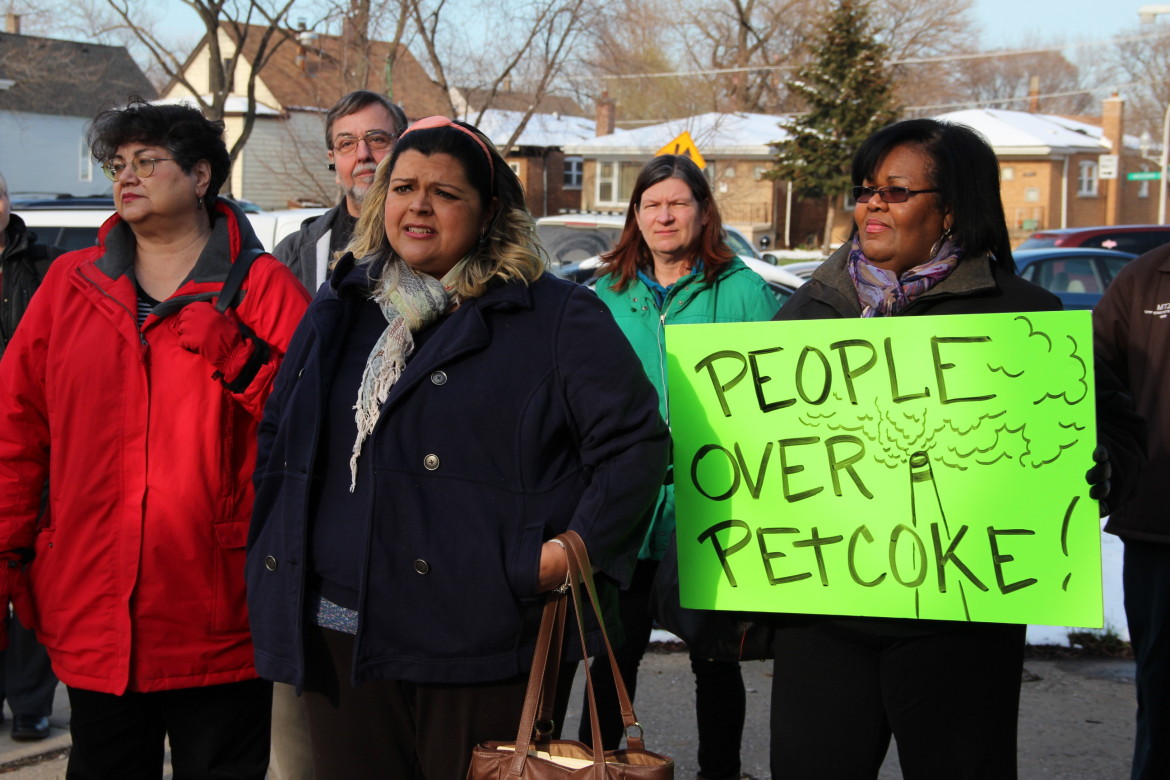 Olga Bautista, center, and other activists opposing petcoke storage on Chicago's Southeast Side.

Whenever the wind blows stronger than 15 miles per hour on Chicago’s Southeast Side, more than 400 residents who are signed up for a text messaging alert system get a notification saying: “Wind Alert! Avoid petcoke exposure by limiting outdoor activity,” and a link to learn more.

The alerts are the result of a collaboration between activists on Chicago’s Southeast Side who for several years have been fighting the storage of petroleum coke, or petcoke, in their neighborhood, and Chi Hack Night, a volunteer grassroots program that engages citizens, programmers and government agencies in helping people use public data and open source software around certain policies or issues.

Hack nights usually involve a group presenting about an issue or data set, followed by breakout sessions where teams of attendees brainstorm on how to use data and technology on the issue.

At the March 24 Hack Night, Southeast Side community leader Olga Bautista presented about petcoke and residents’ attempts to raise awareness and demand action from public officials.

Web developer and Chi Hack Night host Ben Wilhelm explained that they decided the text alerts would be a good way to raise awareness about the issue — “Something that would keep the problem in the forefront of people’s minds and also give them tools to be aware of the wind on the most hazardous days.”

“We are concerned that the [text alerts are] mischaracterizing our operations and providing false information about the material we’ve handled in Chicago for more than 20 years,” he said.

After initial concerns about the storage piles were raised, KCBX installed a dust control system including water cannons that come on four times a day and also whenever the wind reaches 15 mph.

“Our automated weather monitoring and water cannon system is triggered by various weather conditions, including wind speed, wind direction and barometric pressure,” Reint said.  “The system also can be operated manually to provide additional moisture when appropriate. We augment this system with water trucks, the application of dust-suppressants, truck-wheel washers and street-sweeping.”

Keeping the city on alert

Activists see the alerts as a way to keep pressure on city officials to regulate petcoke storage. The Chicago Department of Public Health created rules governing the storage and handling of petcoke in Chicago, and a city ordinance mandated that the city put limits on how much petcoke can be moved through a facility.

Those limits were supposed to be released in March 2015, but they still have not been announced.

“People want to be informed about the potential risk of petcoke contamination,” Bautista said of the alerts. “Having this type of information available also helps people decide what they are willing to put up with. Memorial Day weekend was very windy and we had multiple text alerts on our cell phones. For many people enjoying backyard parties that day in the neighborhood, it was another reminder that more needs to be done to protect our families.”

Wilhelm said that the alerts are partly “a way to show the ridiculous line that the department of public health puts forth – saying ‘Just stay inside.’ Okay fine, but I have to go to work, I have to take my kid to school.”

Wilhelm noted that dust monitors installed by the U.S. Environmental Protection Agency around the KCBX facility record dust levels and release the information several weeks after the fact.

When he’s cross-referenced the days that text alerts were sent out with retrospective EPA dust data, he typically found levels several-fold higher than baseline, he said.

“So there’s concrete evidence that we’re warning of a real danger,” Wilhelm said.

Reint countered that EPA data shows the petcoke is not posing a risk.

“We now have more than a year’s worth of EPA air monitoring data that show the system is working and that air quality near our site is consistent with clean-air standards,” he said. “The EPA’s own ambient air monitor located a couple blocks from our facility at Washington High School also has never exceeded national air standards for particulate matter or dust that could be associated with coal or petcoke. Tests of local residents’ furnace filters also came back negative for petcoke dust.”

More than 400 people are subscribed to receive the petcoke alerts, Wilhelm said.

Also at any given time, the website petcokealerts.org shows the wind speed and direction near the KCBX terminals and notes the exposure risk as “elevated” or other categories. Clicking a “Take Action” button on the site brings users to more information on the petcoke situation and a call to contact Mayor Rahm Emanuel’s office regarding the city’s ongoing decision about through-put limits at the site.

KCBX has previously agreed not to “store” petcoke at the site starting by summer 2016, the culmination of months of controversy, litigation and action from elected officials at the city, county, state and federal level sparked by residents’ activism.

Even if petcoke isn’t stored onsite, residents and environmentalists worry that much dust could come from uncovered barges and railroad cars that deliver and pick up the material — especially on windy days like those flagged by the alert system.

The petcoke alerts, like other projects developed by Chi Hack Night, are an open source program where people can view the administrative side of the website and contribute patches.

Chi Hack Night has a breakout group focused on environmental issues. They’ve launched websites including mybuildingdoesntrecycle.com and Istheresewageinthechicagoriver.com, focusing on buildings that don’t comply with city recycling mandates and releases of untreated sewage into the river during rainfalls, respectively.

Hack Nights similar to those in Chicago are organized in cities around the country, including Miami, Philadelphia, Oakland, San Antonio and Washington.

Chi Hack Night’s website proclaims: “We are a group of thousands of designers, academic researchers, data journalists, activists, policy wonks, web developers and curious citizens who want to make our city more just, equitable, transparent and delightful to live in through data, design and technology.”

More broadly, journalists, activists, policy groups and others have increasingly used “hackathons” to bring together people on a wide range of issues including immigration policy and solving challenges for the solar energy business.

Wilhelm said that while it is too early to discuss specifics, the Southeast Side and Hack Night collaborators are working to use technology in expanded ways to address the petcoke issue.

“We’re trying to channel this distribution, this venue of publicity into mobilizing people more to document the problem, working on ways people would be able to take more of an active role,” he said. “We want more tools at people’s disposal than just calling the city to complain. We’re trying to make the city more accountable and create more of a paper trail of the problem.”