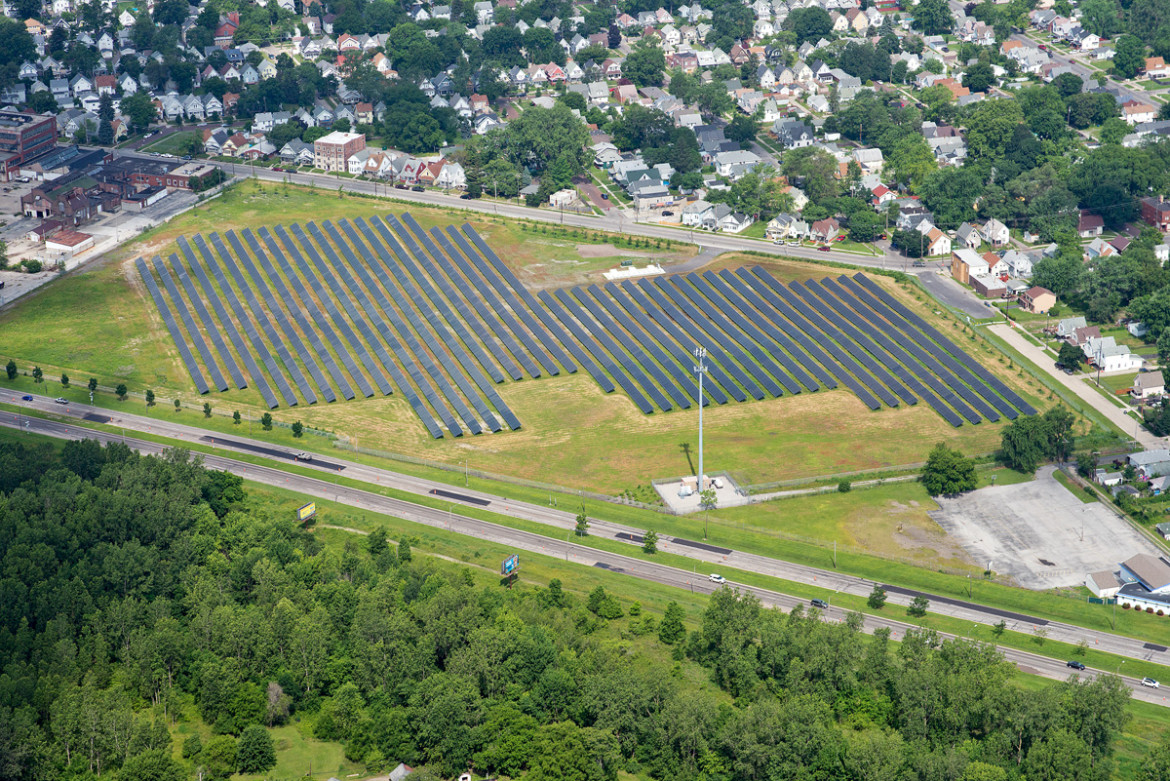 On the whole, the economic outlook for Ohio is good. Unemployment rates are falling while the production of goods and services is growing, according to a report by the Ohio Tax Conference early this year. Yet state lawmakers have cast a cloud of uncertainty over Ohio’s home-grown sustainable energy industry.

In the spring of 2014, Ohio Senate Bill 310 temporarily rolled back renewable and energy efficiency standards. On its heels, State House Bill 483 significantly increased the property setback for windmills, thus increasing project costs. And while statistics show there is job growth in the clean energy industry, it’s sluggish.

In fact, clean energy business executives and advocates say that money is flowing out of Ohio at a rapid rate as renewable energy companies look to greener pastures for their products and services.

According to Brian Kaiser, director of green jobs and innovation for the Ohio Environmental Council, uncertainty in the clean energy industry started even before SB 310 was passed because of the debate that led up to it.

President Barack Obama’s August announcement of the Clean Power Plan, which sets limits on carbon emissions from power plants nationwide, is expected to stimulate renewable energy investment. But even that effect is curbed because of legal challenges to the federal rule.

“SB 310 sent exactly the wrong message that the state needed to send to small businesses and entrepreneurs at a time when the economy was struggling,” Kaiser said. “The message our political leaders sent before it passed was, ‘Ohio, open for business.’ And the message now is, ‘Ohio, open for some business,’ with an asterisk that states, ‘for the rest of you guys, let’s just wait and see.’”

SB 310 placed a two-year freeze on standards set in 2008 stipulating that 25 percent of electricity sold by in-state utilities come from alternative sources, with half of that fraction generated from renewables. Under the freeze, the renewable energy mandate stands at just 2.5 percent.

A committee that held a series of hearings to review the standard is slated to present its findings to the full legislature at the end of September.

Meanwhile State House Bill 483 is likely further reducing wind investments, since it requires a setback of 1,125 feet from the tip of a wind turbine’s blades to a neighboring property line.

In one example of the impacts of uncertainty over renewable energy’s future in Ohio, the Dublin-based developer Solar Vision, LLC laid off staff and is now researching opportunities out of state, said Mike Dickman, the company’s vice president.

Solar Vision was formed in 2008 to focus on solar purchase power agreements (PPAs). Business was particularly good between 2010 and 2013, but the company has not signed any new contracts since early in 2014, Dickman added.

SB 310 sent exactly the wrong message…at a time when the economy was struggling.

“We’re all trying to do business in spite of SB 310, but it’s made it more difficult,” Dickman said. “We don’t really know what’s going to happen when the full legislature debates the results of the committee.”

“But now we’re seeing fewer investors willing to make a commitment because of the decline in the value of renewable energy credits (RECs),” he said.

After downsizing from eight to three staff members, the company is now mulling the possibility of finding a new market niche, “doing something no one else is doing,” Dickman said. He declined to tip his hand as to what that might entail.

Walbridge, Ohio-based GEM Energy, a developer of solar arrays including the 2.1 MW installation at the Toledo Zoo, is another example of a company that has turned its sights to other states.

Launched in 2006 under the banner of the Rudolph/Libbe Group, a full-service national contractor also based in Walbridge, GEM currently accounts for 10 percent of the parent company’s revenue. “We want to grow the energy group and grow that percentage,” company director of solar Jason Slattery said.

“It did cause us to put more focus on other solar-friendly and pro-business states such as New York,” Slattery said. “This bill creates an unstable energy policy in Ohio, making it very difficult to attract the investments needed to build solar installations.”

GEM has about 40 staff, and so far there have been no layoffs.

Missing a chance for leadership

Ohio similarly used to be the main focus of Netronex, a Toledo-based manufacturer of utility-scale solar inverters. CEO Jay Troger said that when the seven-year-old company began shipping products commercially, 80 percent of its customer base was in Ohio.

“But last year we’ve done no business in Ohio at all,” he said, though the company has retained all of its 12 employees.

Troger, like others, blames SB 310 for the need to shift the firm’s focus entirely out of state.

Ohio has a long history of attracting manufacturers, and the renewable energy industry is growing nationwide for many reasons, including improved technology at lower prices, Troger said. “So why would Ohio not want to be in a position of leadership?”

According to the Washington, D.C.-based Solar Foundation, Ohio counted 4,300 solar jobs as of late 2014 – the last report available – for a net gain of 500 from the year before. Manufacturing jobs led the fray. A new census begins this month, and the results will be published early next year.

Add in energy efficiency, advanced transportation and greenhouse gas emissions management and accounting, and that comes to 89,000 workers at 7,200 clean energy establishments. The report said that jobs at firms that do business primarily in Ohio grew at a rate of just 1 percent, versus 8 percent at those focused on out-of-state markets.

While there are no tallies of how much money Ohio’s green energy companies are sending outside the state, Kaiser estimates there are at least a half dozen wind farm projects at various approval stages that could mean a loss of roughly $2 billion in business if they don’t come to fruition. At present there are two utility-scale wind farms in Northwest Ohio.

“The amount of energy and the amount of money the proposed projects would bring is about $2 billion dollars,” he said. “That includes land lease payments, jobs and equipment purchases. That’s money that would all go into the economy and into the tax coffers.”

“So the question more solar and wind companies are going to ask themselves is,” he said, “‘Why not go somewhere that we’re welcome, to a place that has a 21st century energy policy as opposed to one that supports a 20th century policy?’”

Correction: An earlier version of this story had an error in the caption, with the wrong location of the zoo. The solar array is at the Toledo Zoo.