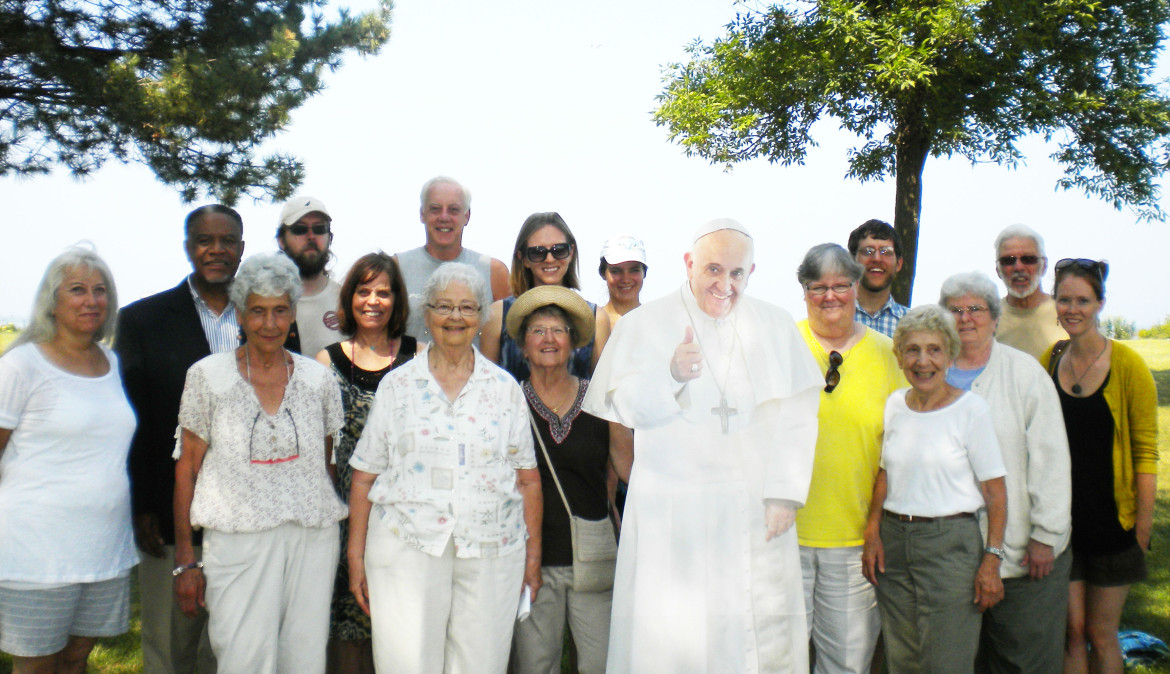 A group of clergy and others pose with a cut-out of Pope Francis against the backdrop of Lake Erie at the World Day of Prayer event organized by Communities United for Responsible Energy.

Members of environmental advocacy groups rallied, protested and prayed about energy-related issues at three independent events in Ohio this week. The gatherings reflect a continuing concern by groups about safe, clean energy and highlight the importance of community organizing for advocacy groups.

On Monday volunteers for the Ohio Sierra Club Nuclear Free Program held a rally in Columbus highlighting safety and ratepayer concerns about FirstEnergy’s Davis-Besse nuclear plant in Oak Harbor and various coal plants, which are involved in the company’s pending “bailout” case before state regulators.

On Tuesday in Cleveland, community members joined with clergy to pray for creation at a public gathering organized by Communities United for Responsible Energy (CURE). CURE is an environmental justice project of the Ohio Organizing Collaborative.

Praying before the pope

Timing for each of the three public gatherings centered on a specific event relating to energy and the environment.

CURE’s prayer meeting at Edgewater Park in Cleveland followed up on a call by Pope Francis for the faithful to join with the Greek Orthodox Church and others in observing September 1 as a World Day of Prayer for the Care of Creation. The pope, who issued a detailed encyclical on climate change earlier this year, visits the United States later this month.

Gathered in a circle on the shore of Lake Erie, clergy from a variety of Cleveland-area faith communities took turns leading prayers. In addition to general themes of praise and thanks, prayers noted concerns about climate change, worries about water pollution and a desire to reduce asthma and other health problems linked to pollution from coal-fired power plants.

“Let’s pray that the pope’s visit will ignite a fire of not just advocacy, but also a commitment” to environmental reform and justice, prayed Rev. Tony Minor of Cleveland’s Community of Faith Assembly. He also called upon those present to help “expand the choir” of people taking action on energy and environmental issues.

Timing for the rally focusing on FirstEnergy’s plants coincided with the start of a hearing on the company’s “bailout” plan before the Public Utilities Commission of Ohio. That plan would have all FirstEnergy utility customers guarantee sales for the Davis-Besse power station and several coal-fired power plants.

The protest outside the Metropolitan Club in Columbus and the Ohio Supreme Court came after Husted’s ruling last month to keep home-rule initiatives relating to fracking off the ballot in several counties.

Husted based his refusal on the fact that Ohio courts have struck down other such initiatives on the grounds that only the Department of Natural Resources can determine where oil and gas wells should go.

Critics claim that the agency too often sides with industry on fracking, while limiting opportunities for citizens and communities to address safety, zoning and other issues that have traditionally been regulated by local governments.

That ruling is now being challenged in the Ohio Supreme Court. If the court lets the lower court’s decision stand, the case could set a “dangerous precedent,” warned Tish O’Dell of CELDF and OHCRN.

“If one person who is not even a lawyer can decide what goes on the ballot and what doesn’t, then this person is taking over the role of the judicial branch as well,” explained O’Dell. “This person is deciding what is legal and what is not as far as content of the proposals.”

While energy and environmental issues play out in the courts and legislature, citizen group leaders said public events like those this week are crucial to raise awareness and push legislators to act on their constituents’ wishes.

An event like Tuesday’s prayer meeting “really presents an opportunity for people of faith to get involved,” said Marti Hunter of Ohio Interfaith Power and Light. “It seems to be working.”

Protests, rallies, prayer services and other events “give more people the courage to stand up and challenge this unjust system that favors corporations granted privileges over real living people’s rights,” said O’Dell. “If more and more people and communities start remembering that it is people who make change and not politicians, then that is success.”

Public gatherings serve an educational purpose too, noted Neil Waggoner at the Sierra Club. “When people see us, someone will always come up and say, ‘Hey, why are you guys out here?’”

“It’s not that they don’t have anything better to do,” said Dan Sawmiller, also at the Sierra Club, noting that many participants hold full-time jobs. Rather, he said, they feel very passionate about whatever issue brings them to a public gathering.

And ideally, once more people understand complicated energy and environmental issues, they will participate in the civic debate.