Photo By
Courtesy of Brenda Jorgenson 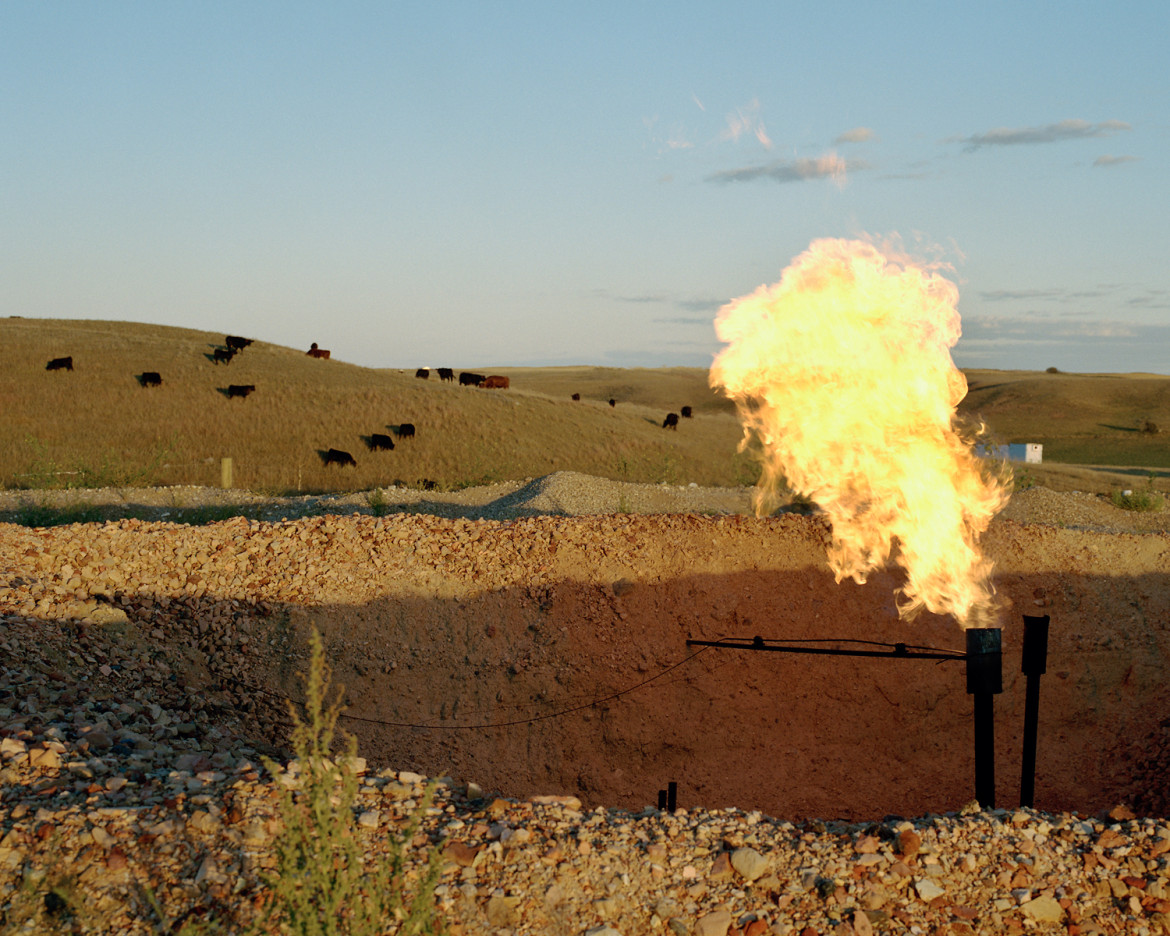 The sight of flares lighting up the sky – visible even from space – from North Dakota’s oil fields has become a notorious symbol of the state’s fracking boom.

Along with the other environmental and local-impact concerns raised by fracking in North Dakota, the flaring of natural gas from the harvested oil contributes to greenhouse gas emissions and air pollution.

Advocates and even energy-friendly state lawmakers have pushed for more controls – and more regulation – on flaring of natural gas, but so far none have succeeded.

A poll conducted this spring by the Dakota Resource Council and the Dacotah Chapter of the Sierra Club showed fears that the environment and citizens may suffer from flared gas or accidents related to fracking.

The polling was commissioned by the two organizations.  Bay Area-based Resource Media used the results to create a messaging framework around flaring and property rights, among other issues.

The Dakota Resource Council and Sierra Club are members of RE-AMP, which publishes Midwest Energy News.

As it stands, North Dakota allows drillers to flare gas tax-free and royalty-free for one year after a well opens. After that time, oil companies can continue not paying royalties or taxes if they can show that connecting to a natural gas pipeline is economically unfeasible.

The poll showed strong support for requiring oil companies to pay taxes and royalties on flared gas closer to when wells open for business. And survey respondents mostly did not buy the argument that more regulation will hurt the boom, Morrison added.

Although a portion of that bill, SB 2343, survived in the legislature, in its current form it does not contain any regulations involving taxes or royalties. That section of the bill was totally eliminated.

Wayde Schafer, conservation officer with the Sierra Club’s Dacotah Chapter, said that many North Dakotans see flaring as a waste of energy that has a negative impact on surrounding neighbors and communities.

“It doesn’t make sense, and the poll shows North Dakotans got that,” he said.

The U.S. Energy Information Agency reported in 2014 that nearly one third of the state’s natural gas in recent years was flared rather than consumed on-site or sold. In contrast, the state burned off just three percent of its natural gas in 1999.

The 96 billion cubic feet flared in North Dakota in 2013 produced the same amount of carbon dioxide as 1.1 million cars and trucks, according to an Earthworks report. Earthworks suggests North Dakota lost $854 million in taxes from 2010 to 2013 that could have been paid on the flared gas.

Now flaring is costing them nothing…But that might change.

In addition to a wasted resource are health concerns, said Schafer. Flared gas is rich in methane, a greenhouse gas with a proportionally greater climate change impact than carbon dioxide.

The Union of Concerned Scientists reports an increase of hazardous air pollutants in areas where flaring has occurred. Two of the six common pollutants regulated by the Environmental Protection Agency — particulates and ground level ozone — are found in higher levels in the air near flaring sites, the UCC said.

Elevated levels of these contaminants can cause cardiovascular disease, cancer and respiratory symptoms. Living within a half mile of gas well sites means greater risk of health problems, according to the UCC.

Brenda Jorgenson is a rancher in the northwest part of the state. There are 25 wells near or on her land, including two within 800 feet of her home. The smell and loud sound of gas flaring has made for a difficult living environment for her family and for anyone who visits, she said. After two years, flaring stopped on the two closest wells after a pipeline was installed.

Oil companies pay royalties to mineral rights holders on the oil they extract and on any gas sent through a pipeline – but they do not pay royalties on flared gas.

“It’s a free pass,” said Bismarck attorney Derrick Braaten, who filed a lawsuit several years ago on behalf of 14 mineral rights owners seeking compensation from oil companies for illegally flared gas, arguing they should be paid for the value of that gas.

All but one of the cases was tossed out by a U.S. district judge in Bismarck, who suggested the mineral rights owners had not exhausted all avenues to receive compensation through the North Dakota Industrial Commission.

In fact, the Industrial Commission cannot force an oil company to pay mineral rights owners. “The court of jurisdiction would be the district court,” where the minerals reside, said Alison Ritter, commission spokeswoman. When a company is connected to a pipeline system it is in compliance and allowed to flare when necessary, she noted.

In most cases, Ritter said, the companies still flaring were doing so because they faced pipelines running at full capacity and had no other options.

Braaten plans to appeal to the North Dakota Supreme Court.

Should the court agree with him, the claims against oil companies could then become class action lawsuits, he said. Many owners will only receive $2,000 to $3,000 annually for the portion of any mineral rights they own, he said, and attempting a court battle on their own would cost more than they would receive.

Meanwhile a law forcing companies to pay taxes and royalties on flaring would benefit mineral rights owners, who would receive the royalties. And it would likely also reduce or sometimes eliminate flaring — a benefit to nearby landowners, Schafer contends.

“Now flaring is costing them (oil companies) nothing,” Schafer said. “It’s easier to flare off natural gas to get to the oil. But that might change if there was a tax.”

Under state law in North Dakota, as in many states, mineral rights are separate from surface land rights. Hence landowners often do not own the mineral rights below their land, and the owners of minerals have the right to tap them even if it impacts the landowner.

Oil companies are expected to pay for any damages they cause to land. Some companies offer a lump sum with no annual payments, which many ranchers and farmers have seen as unfair because the impact on their land continues as long as the wells operate, Braaten said.

Other companies pay an upfront sum and an annual fee that landowners can use to restore land, he said, adding that some landowners “have had problems with getting paid.”

“Every month, industry has exceeded that (77 percent) goal,” Ritter said. June’s production statistics show 82 percent of gas being captured. The oil industry, however, has begun to show signs it will not be able to reach the more aggressive 85 percent goal beginning next year, she said.

The Industrial Commission may consider pushing back the target or changing it at a meeting Sept. 24, Ritter said. Low gas prices, delayed federal permits and delayed gas plant construction have held up the possibility of more gas capture, she said.

More pipelines are being built but a recent one took three years to receive all its government approvals, Ritter said. The commission may move the deadlines forward at the same time making them more aggressive by adding one or two percent to the capture total, she said.

On issues aside from gas flaring, poll respondents sought greater fairness from oil companies and more regulation from the state.

Seventy percent said property owners should be compensated for reduced property values related to fracking. By a margin of five to one, poll respondents believe the state is not regulating the boom well.

The poll also revealed that a majority of participants saw drilling as a threat to “clean water supplies that are important to residents and farmers,” by a margin of 55 percent to 33 percent

But despite these complaints, overall the state’s residents generally support the oil industry and see it as a positive influence on the economy and government coffers. North Dakota has a surplus greater than $1 billion thanks largely to the oil industry.

Conducted by the Social Science Research Institute at the University of North Dakota, the survey results come from telephone interviews of 901 randomly selected adults age 18 or older state residents conducted from February 18 through March 6, 2015 by .

According to the report, “oversampling was conducted in the oil-producing counties to provide more reliable estimates from adults living in the oil production area.” The error rates for the survey range from plus or minus 5.2 to 4.9 percent.

Although North Dakota is politically pro-energy and one of the Midwest’s more conservative states, it also has a strong streak of quiet environmentalism, Morrison said, as evidenced by the poll results.

“[Oil industry leaders] don’t care what it’s doing to the people who live here and have spent generations building a good life for themselves here,” Morrison said. “People didn’t expect to have the place destroyed in front of them.”

(Clarification: The North Dakota Industrial Commission changed the meeting date since this article was published to Sept. 24th. The article also now notes both proposed laws were defeated.)