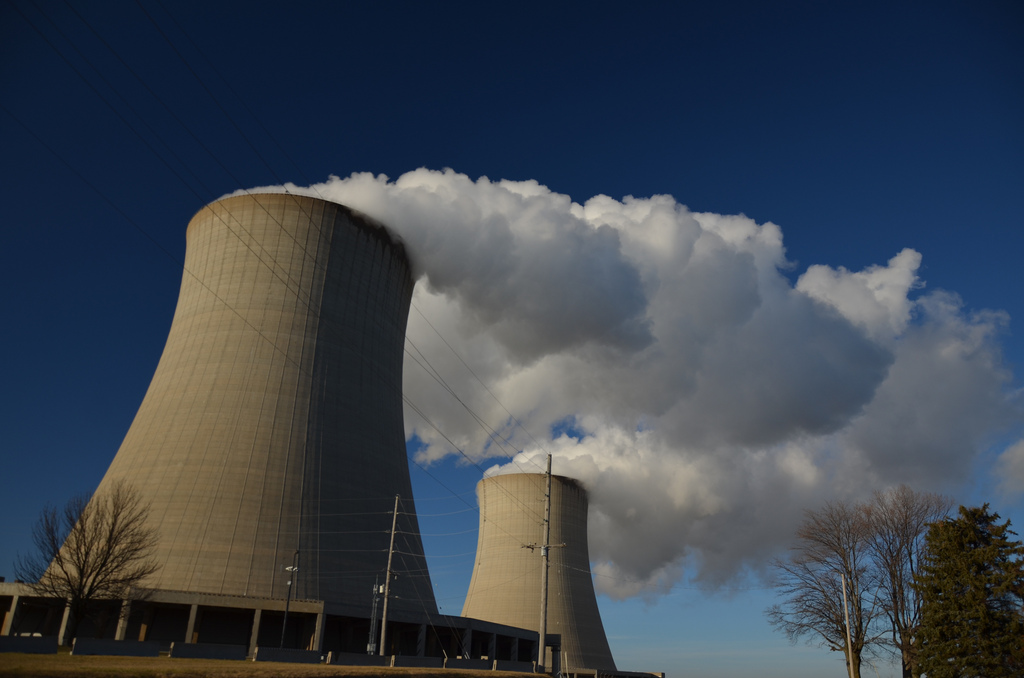 Exelon has been pushing Illinois lawmakers to pass legislation that critics call a “bailout,” basically guaranteeing its Illinois nuclear plants an additional $300 million in annual revenue.

Without these measures, the company has said, up to three of its six Illinois nuclear plants could close, endangering the availability of electricity.

However, over the past few weeks, Exelon has secured promises for an additional $1.6 billion or more in revenue for basically promising that its plants will be ready to provide a certain amount of electricity if demand is high and/or supplies are limited by extreme heat or cold.

On Wednesday, the PJM regional market announced results of the latest of three recent capacity auctions, where generators bid to get payments for guaranteeing reliable energy. Exelon was a big winner in all three auctions, covering the years 2016 through mid-2019.

The Quad Cities and Byron plants which Exelon had said might close are now committed to run through May 2018 and through 2019, respectively, since they cleared bids in the auctions promising to provide power through that time.

In a statement released this morning, Exelon said it will delay a decision on the plants’ future for one year, and indicated it still needs the legislation.

“While Quad Cities and Byron remain economically challenged, we are encouraged by the results of the recent capacity auctions,” said Exelon president and CEO Chris Crane said in the statement. “The new market reforms help to recognize the unique value of always-on nuclear power, while preserving the reliability of our electric system. However, these plants are long-lived assets with decades of useful life left, and today’s decision is only a short-term reprieve.”

Exelon will “continue its dialogue with Illinois policymakers about market and policy reforms that properly value nuclear power for the economic and environmental benefits it provides,” the statement said.

But with the billion-plus dollars headed its way thanks to the capacity auctions – a significantly greater amount than the company would have reaped under previous capacity auction design – critics say the company doesn’t need further revenue guarantees.

“Why are they still in Springfield asking for a bailout? It’s time for them to go home, enjoy their profits and move on.”

“The bottom line is it was a very big day for Exelon,” said Dave Lundy, director of BEST, described as a coalition of business, consumer and government groups opposed to legislative action to help Exelon. “They got a big windfall – they cleared more than $600 million out of the [2018-2019] auction [plus the other two results].

In the August 21 PJM capacity auction for June 2018 through May 2019, Exelon secured more than $650 million in capacity payments for its nuclear reactors. In following days PJM held two more capacity auctions, called capacity performance transition incremental auctions, essentially redoing auctions that had already been held for the 2016-2017 and 2017-2018 years. That’s because the way capacity payments are calculated has been changed since those auctions were originally held, and PJM intended to secure more capacity.

Experts say that Exelon cleared bids equating to more than $650 million in the 2018-2019 auction, more than $490 million in the 2016-2017 transition auction and about half a billion dollars in the 2017-2018 transition auction, with results announced September 9. That gives Exelon significantly more revenue than it would have gotten for capacity under the previous 2016-2017 and 2017-2018 auctions. Exelon did not respond to questions about the value of its bids in the auctions.

The price at which bids were accepted in the northern Illinois “ComEd region” for the 2018-2019 auction – $215 per megawatt day (MWd) – was significantly higher than expected. The financial analysts UBS had predicted $160, which was roughly the price for the PJM as a whole. The Eastern MAAC region of PJM, in the Northeast, had an even higher clearance price, at $225/MWd.

Exelon’s Quad Cities nuclear plant did not clear the 2018-2019 auction. That means the price Exelon said it wanted to promise power from Quad Cities was higher than PJM decided to accept for that year.

Some experts think the company intentionally opted out of securing 2018-2019 capacity payments for the Quad Cities plant – perhaps since bidding its power into the auction could have reduced the uniform price that all sources are ultimately paid for their capacity. A similar situation developed in last year’s auction, as RTO Insider reported.

The Quad Cities plant did clear the 2016-2017 transition auction. In the original auction for 2016-2017 capacity, the Quad Cities and other Exelon reactors bid in and cleared at payments of just $59/MWd. That shows the company saw benefit in offering capacity at a much lower price previously than it was willing to offer for the 2018-2019 auction.

Exelon’s Byron nuclear reactor cleared the 2018-2019 auction. Since the clearing prices were higher than expected, experts say it’s possible Exelon made a high bid for the Byron plant’s capacity power, and may have been surprised the bid was accepted.

Exelon did not respond to questions beyond providing the statement it released today.

The stakes were higher and the spotlight brighter than usual at this year’s capacity auctions because of the “polar vortex” in early 2014 and another harsh winter this year. In the frigid weather, some natural gas and coal plants were not able to deliver power due to frozen pipes and coal piles.

Power companies, including Exelon, had argued that PJM needed to do more to ensure generators were actually able to deliver the power they promised even in the face of extreme conditions. Hence there was extra emphasis placed on “performance” in this year’s auction, under the new rules approved by federal regulators.

This year 80 percent of the capacity clearing the auction must be able to meet the new “performance” rules; in two years, the entire capacity must comply with the rules. But critics have questioned whether the new design is necessary and suggest that it does a disservice to ratepayers while favoring nuclear plants.

They question whether capacity auctions, especially under the new performance rules, actually result in any new generation being built or any plants being kept online that would not have happened without the payments.

“Today’s order authorizes PJM to impose costs on consumers with no corresponding benefits. These costs could be significant – in excess of a billion dollars,” he wrote in a dissent as part of FERC’s August 25 decision denying a complaint challenging the transition auctions.

If generators did not bid into or did not clear the recent transition auctions, they will still be paid any commitments from the previous auctions for those years. But if they rebid and cleared, as Exelon did, they could make a bigger profit at taxpayer expense, Bay pointed out.

In a separate dissenting opinion in June, Bay criticized the new performance-based design of the capacity auctions as a whole.

The Citizens Utility Board consumer watchdog organization estimated that northern Illinois customers will pay $100 more per year because of the 2018-2019 capacity auction results.

“This price spike is one more red flag that the rules governing the capacity auction open the door for power generators like Exelon, NRG and Dynegy to make windfall profits,” CUB said in a statement. NRG and Dynegy own multiple Illinois coal plants, which can also often benefit from capacity payments.

“Our overall concern is locking in an expensive one-size-fits-all approach when cheaper solutions are available.”

John Moore, senior attorney for the Sustainable FERC project of the Natural Resources Defense Council, notes that “the ComEd northern Illinois zone is somewhat of an island in the middle of MISO,” and that improving transmission networks so that power could be transferred between the two more easily would relieve capacity concerns.

“If you design a market that is requiring resources to meet these stringent performance requirements you’re going to see higher prices,” said Moore. “Our overall concern is locking in an expensive one-size-fits-all approach when cheaper solutions are available” – namely, energy efficiency and demand response.

A new transmission line is in fact being constructed that would more effectively move power from the Byron and Quad Cities plants. The Grand Prairie Gateway line could absolve Exelon of paying penalties related to congestion on transmission lines, boosting the financial outlook of the nuclear plants by almost $150 million more, as reported by Crain’s Chicago Business.

The structure of the capacity auction does not consider renewable energy from solar or wind as very reliable sources that can be called on when needed. This is reflected in the extent to which wind and solar energy producers can bid into the auction. A wind farm can only be rewarded for 13 percent of its nameplate capacity, and a solar installation for 38 percent of its potential.

And, according to analysts, the capacity system is not structured to take into account power provided by rooftop solar panels or other forms of distributed generation, which ultimately reduce the overall need for power and hence the need for generation capacity at the ready.

Renewable energy advocates say the capacity auctions should be reworked to offer larger rewards for solar, wind and distributed generation, as well as for energy efficiency and demand response, which reduce the need for power.

“The market just undervalues wind and solar by assigning it one capacity factor instead of seasonal factors,” said Moore. “Thirteen percent for wind might reflect summer [capacity], but it’s certainly much lower than [wind’s capacity in] winter. You absolutely can get a higher reliability value out of renewable energy” than the capacity markets say.

“I know it’s not sexy, but efficiency is also very much a resource adequacy and reliability solution,” he said. “There is a lot more the market could do to benefit efficiency. There’s a lot more efficiency out there that can’t participate in the market.”

Renewable energy proponents say the direct and indirect outcomes of the PJM capacity auctions provide more reasons why the Illinois legislature should pass a proposed “Clean Jobs” bill which would strengthen and fix a serious glitch in the state’s Renewable Portfolio Standard.

That bill and Exelon’s proposed bill are seen as diametrically opposed; also thrown in the mix is an energy bill proposed by ComEd, whose parent company is Exelon. Illinois legislators had said they didn’t want to pass energy legislation until the PJM auctions were complete.

With the auctions possibly complicating Exelon’s political strategy, there could be more space for the Clean Jobs proposal to move forward. And if the Quad Cities plant really is closed, advocates say, increased renewables can help pick up the slack.

Meanwhile the very limited ability of wind, solar and energy efficiency to get revenue from the capacity auction shows that standards are necessary to help boost renewable development, backers say.

“It’s another reason we can’t just depend on market forces for renewables to be built, we need standards,” said Rebecca Stanfield, deputy director for policy of the Natural Resources Defense Council Midwest program. “We’re hoping we can try to move forward [with the Clean Jobs Bill]. Certainly we need clear energy policy to start to get projects up and running.”

Editor’s note: An earlier version of this story stated the wrong location for the Three Mile Island plant. It is in Pennsylvania, not New York.