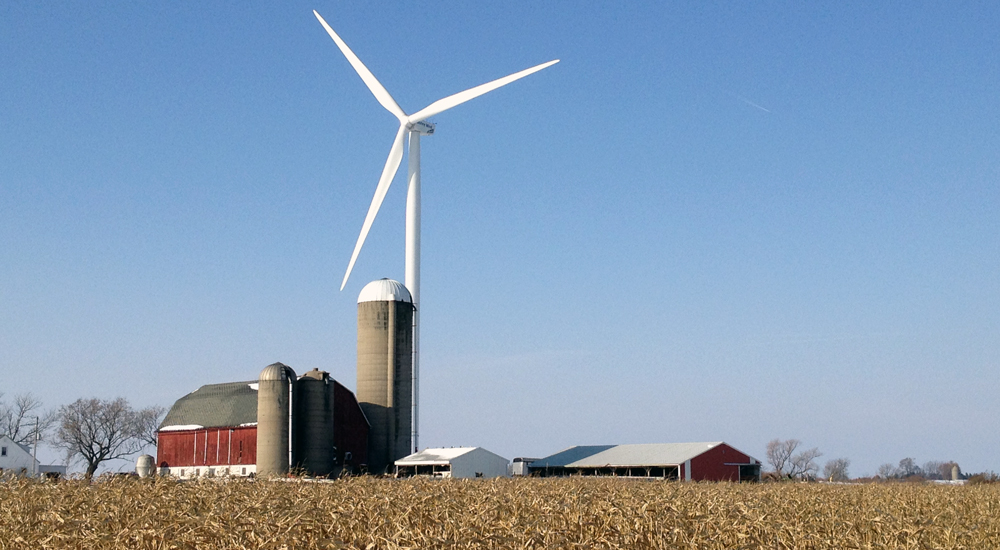 A Wisconsin town of fewer than 1,200 stands on the verge of sending shock waves through the wind energy industry.

Late last year, Glenmore, a rural community just south of Green Bay, persuaded its county’s board of health to declare that the sounds of an eight-turbine wind farm pose a “human health hazard.”

It was the first time a health board has made such a determination. Wind energy opponents from across the country seized on the decision as proof of “wind turbine syndrome,” a supposed illness caused by low-frequency noise and “infrasound” that is typically undetectable to the human ear.

Local activists have continued to press the issue in hopes of shutting down the turbines, pointing to families who complain of sleep deprivation, headaches, nausea and dizziness — symptoms similar to sea sickness. Lawns display signs saying, “Turbines kill: Birds, Bats, Communities” and “Consider How Your Turbine May Harm Your Neighbor.” More than one family has moved out of their home.

Duke Energy Corp., which purchased the Shirley wind farm in 2011, has strongly pushed back against the hazard determination, pointing to a series of studies that have found no connection between infrasound and the symptoms described by the local residents. The case has caught the attention of the national wind industry, which is concerned about the precedent it could set and whether it could embolden local activists around the country. They claim it is part of a politically motivated campaign by anti-wind advocates.

Attention has now turned to the county’s lead health official, who has said she will rule on the issue by the end of the year. It’s unclear whether the official can force the wind farm to shut down, but if she does, Duke will be quick to challenge the decision in court.

By the end of the month, the local campaign, Duke Energy and other parties will submit binders of public comments making their cases. The local advocates appear bullish about their chances.

“If this were any other industry, they would already be shut down.”

“Abandoned homes, sick families, continued Duke Energy ordinance violations,” said Steve Deslauriers of the Brown County Citizens for Responsible Wind Energy, the principal group opposing the farm. “If this were any other industry, they would already be shut down. It is high time that wind developers are held accountable for the hell they levy upon families.”

The Shirley wind farm looms large over Glenmore, with its sweeping turbines situated close to farms and family homes. It went online in December 2010 amid local opposition. Local newspapers featured opinion pieces and letters to the editor that expressed various concerns about the project, including health effects.

It produces 20 megawatts of electricity that it supplies to the utility Wisconsin Public Service Corp., enough to power 6,000 homes.

The controversy over the farm ramped up after Duke purchased it at the end of 2011. As the state was preparing to permit a larger wind farm elsewhere, it requested a study on the sound and health issues reported at the Shirley turbines.

In December 2012, the Public Service Commission of Wisconsin, which is an independent regulatory agency, and the environmental group Clean Wisconsin released a study that included the findings of four acousticians. The consultants spanned the ideological spectrum; some worked primarily for opponents of wind farms, while others had worked on both sides of the issue.

“The four investigating firms are of the opinion that enough evidence and hypotheses have been given herein to classify [low frequency noise] and infrasound as a serious issue, possibly affecting the future of the industry,” it said.

It acknowledged that there is “sparse or non-existent” evidence of sickness in “peer-reviewed literature” but concluded that the four specialists “strongly recommend additional testing” at the Shirley farm.

Local advocates are posting home-made signs on their lawns in Glenmore. Photo by Noelle Straub.

Local advocates seized on the findings as validation that their symptoms were caused by the turbines. They pressed the seven-member Brown County Board of Health to declare the farm a health hazard. In particular, they highlighted the conclusions of Robert Rand, a Maine-based “acoustics investigator” who has primarily worked for groups opposing wind projects.

“Most people accept — because it’s been occurring for thousands of years — that people get motion sickness,” Rand said in an interview. “And yet, in this particular case, there seems to be a lot of pushback.”

The findings grabbed the attention of the health board. Audrey Murphy, its president, said in an interview that the “symptoms are pretty universal throughout the world.”

Murphy insisted the board doesn’t oppose wind energy, saying the turbines should be located farther from homes. In Wisconsin, they must be at least 1,250 feet away.

There is some precedent for the board’s decision. The issue has long plagued local health boards in Massachusetts. Fairhaven, for example, in June 2013 shut down the town’s two turbines at night in response to complaints about sleep deprivation.

Falmouth, Massachusetts, found in 2012 that one turbine was violating local ordinances because it was too close to a home and emitting too much audible noise — not infrasound. But the controversy spurred studies by acousticians, including Rand, that concluded the turbines produce sounds capable of disturbing nearby residents and may lead to annoyance, sleep disturbance and other impacts. That led multiple residents to file lawsuits seeking damages for their health problems, claiming the turbines were to blame.

But wind supporters cite other studies showing no such linkages.

Murphy said the Wisconsin board has sought to take all the relevant findings into account.

“This has been done very slowly and very methodically,” she said. “The board has been concerned about the health of these people.”

Wind proponents are quick to try to poke holes in the board’s findings, as well as the local activists’ evidence.

They start in Massachusetts. After the action in Falmouth, the state agency convened a panel of independent scientists and doctors. They found no evidence that wind turbines pose a tangible health risk to those living near them.

Plus, there have been several peer-reviewed scientific studies since then that have reached similar conclusions, including one by the Massachusetts Institute of Technology and another by Canada’s health ministry. The Centers for Disease Control and Prevention doesn’t recognize “wind turbine syndrome” as an illness. The term was created by a pediatrician, Nina Pierpont, around 2006. Pierpont’s husband is an anti-wind activist.

Health Canada’s 2014 study, for example, found no evidence to suggest a link between exposure to turbine noise and any self-reported illnesses, including dizziness, migraines and chronic conditions.

“Duke Energy Renewables operates about 1,200 wind turbines around the United States, and we’ve only had health complaints about the eight turbines we operate in Brown County,” said Tammie McGee, a company spokeswoman. “We don’t see these kinds of complaints, for the most part, anywhere else.”

She added: “We feel confident that we’ve met all the state and the town of Glenmore’s conditions for operations and compliance with all noise ordinances and laws and regulations.”

The American Wind Energy Association has also responded to the local group’s claims and pointed to some research on a “nocebo” effect. The concept is the opposite of the placebo effect, meaning that people who are told to expect certain symptoms may experience them whether or not the supposed cause of the symptom — in this case, turbines — is actually present.

But perhaps most importantly, some who were involved in the 2012 Public Service Commission study dispute the advocates’ interpretation.

Katie Nekola, the general counsel of Clean Wisconsin, which helped fund the study, said it was only an inventory of noise levels and shouldn’t be used to draw conclusions on health effects.

“Nothing in our study provided any kind of basis to say that noise was making them sick.”

The local groups, she said, “took the equivocal nature of the preamble to mean that things are falling apart and everyone is going to die.”

There is “no factual basis in what they found for the health determination that the county made,” she added. “Nothing in our study provided any kind of basis to say that noise was making them sick.”

Rand, the acoustician who worked on the earlier study, contended that the results show what he’s argued for years: Some people experience the health effects, and they are real and scary. Others simply don’t and refuse to acknowledge they exist.

“Some people are saying this isn’t happening — or people are making it up in their heads,” Rand said. “People who don’t get seasick will never understand what you’re talking about. … It doesn’t require peer-reviewed scientific studies to accept that some people get motion sickness and sea sickness.”

Deslauriers, the representative of the local group opposing the farm, declined to comment further, citing the ongoing public comment period on the health board’s finding.

That window closes at the end of September. Then the county’s top health officer, Chua Xiong, will rule on the issue by the end of the year after meeting with stakeholders and doctors.

It is unclear, however, whether she has the authority to shut down the turbines. Murphy, the head of the county’s health board, thinks Xiong does. Duke isn’t sure but will challenge such a determination in court.

The county lawyer, Juliana Ruenzel, refused to answer a question on Xiong’s enforcement authority before abruptly ending an interview with Greenwire. Xiong did not return several messages seeking comment.

Nekola of Clean Wisconsin said a county determination would apply only to local projects and shouldn’t affect other wind farms that have obtained permits from the state.

She said the Brown County effort was indicative only of a localized desire to block wind farms motivated by a not-in-my-backyard sentiment.

“There is just a contingent of people who oppose wind,” she said. “And they will use any mechanism they can think of to stop a project.”

But Rand sought to emphasize that the symptoms are real and he has felt them.

“This isn’t an intellectual exercise,” he said. “People get sick.”