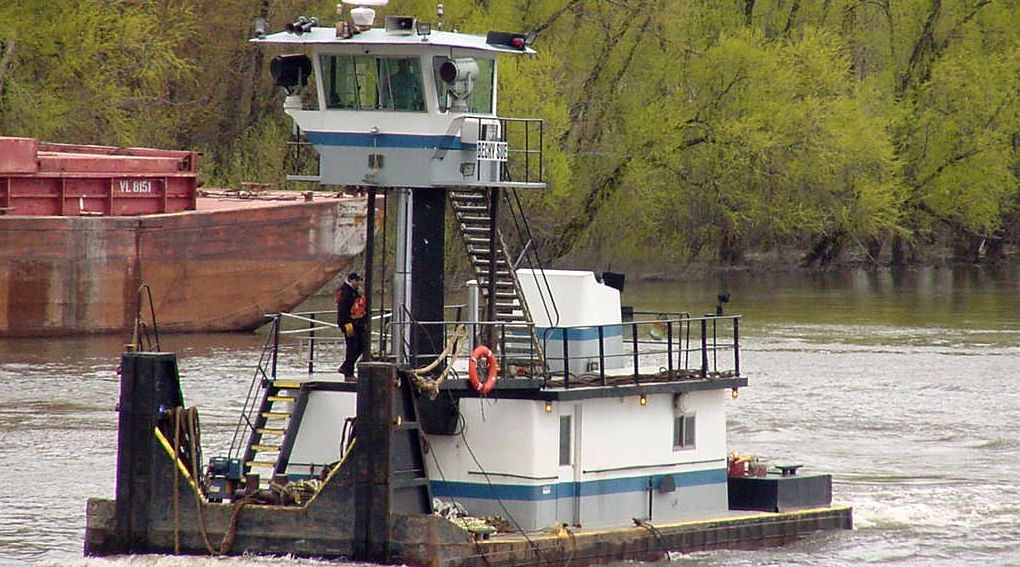 A tugboat that frequents the Mississippi River in St. Paul has been upgraded to cleaner engines thanks to a grant program.

While an emissions scandal involving Volkswagen has diesel powertrains under increased scrutiny, a Minnesota program is helping to clear the air, one engine at a time.

Becky Sue is a gritty 38-year-old tugboat that once ran a 600 horsepower diesel engine while pushing commodities to different Mississippi River docks in and around St. Paul, belching out tons of pollutants annually.

This week, the Becky Sue’s owner, Upper River Services LLC, celebrated with local officials and the Environmental Initiative the public unveiling of two updated diesel motors that will reduce annual particulate emissions, or soot, by 20 tons – equivalent to removing 12,000 cars from the road each year.

The upgrade of the 17-year-old engine “reduces emissions and that’s why we’re doing this – reducing emissions is everything to us,” said Lee Nelson, president and chief executive officer of Upper River Services.

The diesel engines are funded in part by a grant from Project Green Fleet, a 10 year old effort operated by the Minneapolis-based Environmental Initiative. The voluntary program works to reduce emissions and has focused on installing pollution control devices on school buses.

Project Green Fleet, using money from Flint Hills Resources, offered $90,000 to the effort but Upper River Services will foot most of the bill.

Over the years the Initiative’s program – operated in conjunction with a Minnesota Pollution Control Agency effort by the same name – has improved 3,200 school buses carrying more than 300,000 children.

David Thornton, PCA assistant commissioner, said schools were the first focus because of the exposure children had to pollution from buses. The state’s school bus fleet has been completely retrofitted, he said, so the program expanded.

Project Green Fleet has also retrofitted more than 1,300 transit buses, construction equipment, trucks and trains, resulting in the equivalent of 750,000 cars being removed from the roads.

The program employs a variety of approaches to reducing diesel emissions such as diesel filtration systems, which trap particulate matter, and catalytic converters. The program also helps with rebuilding or replacing diesel engines and with installing systems that can provide heating and cooling without drawing from the engine, letting them run more efficiently.

Still, these projects were small compared to the tugboat.

“As we move to larger engines we can have a much bigger impact in the future,” Harley noted. “We think it’s the beginning of a whole new era for Project Green Fleet.”

The focus on diesel engines comes down to the reality that while they are “an important part of our economy” their emissions are exceptionally high, he said.

In 2007 the U.S. Environmental Protection Agency began enforcing regulations requiring new trucks and buses to have technology installed to reduce pollution by 90 percent. The problem, said Harley, is that much of the diesel fleet has not been replaced.

“We know that diesel engines are going to run for 10 or 20, 30 years,” he said. “What we have the ability to do for a relatively modest investment in some cases is to dramatically decrease the pollution from engines and extend the life of the vehicle and create a better work environment for those who are running the vehicles.”

The tugboat project remains, however, a drop in the bucket. The PCA has estimated more than 500,000 on and off-road diesel engines continue to operate in Minnesota and “could be retrofitted,” Thornton said.

The money “is drying up” for similar projects at the same time the EPA has become more aggressive in regulating pollutants, he noted. Harley agreed that funding is an issue, though his organization still has money available for retrofits.

Should the PCA not meet air quality standards the agency may have to impose more regulations on large and small businesses with no carrot of money to help them install pollution abatement equipment, Thornton added.

Nelson, the tugboat owner, sees plenty of advantages to having new engines. Employees, dock workers and communities will breathe less noxious fumes. Yet he still will have five more tugboats with old engines.

“Not only do we have diesel engines in them but we have cranes and loaders running diesel,” he said. “We have to find owners willing to finance projects while understanding they will pay for the lion’s share of the cost.”