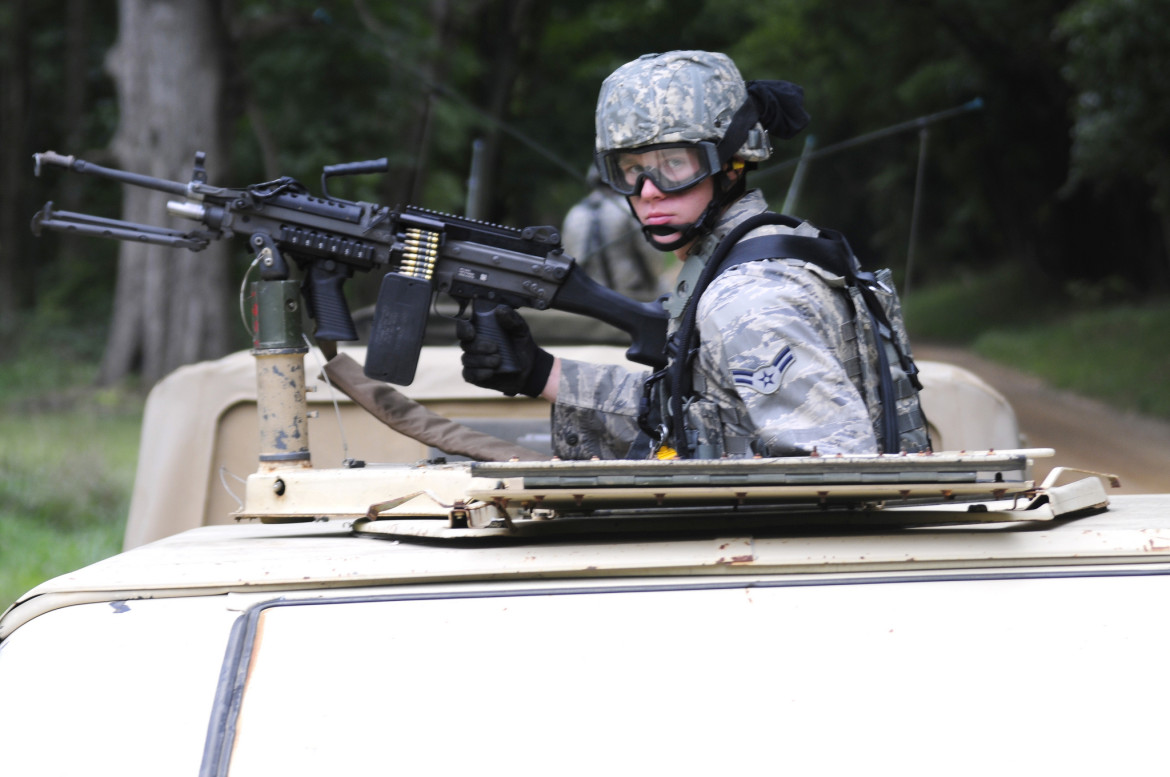 A retired vice admiral in the U.S. Navy — who is now an adviser on a board that studies pressing issues to the country’s national security — says Michigan is a leading example of how energy independence will be crucial for adapting to the threats of climate change.

Vice Admiral Lee Gunn, who served in the Navy for 35 years and is now vice chairman of the CNA Military Advisory Board, was in Michigan this week touring a National Guard base and meeting with lawmakers who are drafting sweeping energy policy changes.

In 2007, the CNA Military Advisory Board released its first paper on the threat of climate change to national security, one of the earliest instances the two issues were tied together, Gunn noted.

“One of the perspectives that was missing from the climate change discussion was the military perspective,” Gunn said.

Over the past eight years, the panel has released four more studies, some of which are updating earlier conclusions “because things are happening much faster than we predicted in 2006 and 2007,” Gunn said. The most recent will be released in October.

Gunn, a Washington D.C. resident who grew up in Michigan, last served in the military as inspector general of the Navy where he oversaw the department’s inspection program and overall readiness.

He spoke with Midwest Energy News this week about the military’s focus on energy independence and mitigating climate change set against a backdrop of national security.

Midwest Energy News: What are some of the latest issues you’re talking about in your role on the Military Advisory Board?

Gunn: We’re really fanned out around the country talking about security of the electric grid and the urgency in providing investment in infrastructure in the U.S. to make it far less vulnerable to an attack. It needs to be far more flexible in its ability to incorporate renewables with other forms of base load energy.

What have you seen this week at the National Guard’s Fort Custer base in southeast Michigan that works toward these goals?

I’ve been impressed with the degree to which the Michigan Army National Guard has stepped out and taken the initiative on energy matters. Particularly, I’m talking about (leaders at Camp Graying in northern Michigan) who are working to create energy generation capabilities for the base. At Fort Custer, I laid eyes on some of the developments underway with the solar field and where they will be building wind funnels.

Collectively, I’m thinking that the Guard in Michigan is going to be successful in generating sufficient electricity in the two big sites that it operates to offset the energy needs of not only those sites but also armories and other infrastructure around the state. That’s very impressive. The Michigan National Guard is a particularly interesting place to see innovation taking place.

What message do you have for lawmakers here as they work to craft new statewide energy policy?

In the governor’s letter to Michiganders in March this year, he explained why it was important to have a long-range energy plan and have flexibility built into that plan. It kept reminding all of us of the important features of a sound energy plan for the next decade that would have Michigan proceed to an electrical system that was reliable, affordable and kind to the environment.

In addition, it also means flexibility in being able to accommodate new technologies and new instances of generation via renewables. The message I’m carrying to legislators is: Good on you. Keep going. There is evidence of planning and looking ahead in Michigan that we wish we saw across the country.

There is a lot of debate here, though, about the specifics of what that next policy will include. Do you wade into those specifics?

The MAB scrupulously stays clear of partisan politics, for sure. Sometimes when you get in exacting details of the means for achieving goals, you tread on some political toes. We want to avoid that.

What’s more, we don’t necessarily claim to know what’s best for Michigan. In my personal view, there is utility in setting standards. Whether the right one is advocated by a certain entity or whether a portion comes from private generation, that’s for someone else to decide.

Has energy production always been a focus of the U.S. military? To what degree has that emphasis changed throughout your career?

The focus in the military over the course of my career and since has very much sharpened on energy. There are innovations on the front line that have taken root and there are military installations in the United States like Camp Grayling and Fort Custer that have become more cost efficient to run, provide more reliability and are going to support energy in surrounding communities.

How is energy independence and climate change a national security issue for residents in the Midwest?

In many ways. People in Michigan are affected by national security issues because it’s the moms and pops of Michigan who send future generations of men and women to be part of the military and to benefit from serving in an advanced organization that makes the best use of energy in all its forms.

In addition, the Defense Department has always played a role working with industry and local governments in creating and innovating in technology. The entrepreneurship and manufacturing that is involved in helping us achieve our goals is leading the U.S. to a new energy economy.

In your view, do lawmakers fully grasp the concept of climate change being a threat to national security? What is your message those who don’t accept the science behind climate change?

We’d like to think we’re helping them understand those things. If we amplify the importance of energy and modernizing the grid at the same time, the seeds are already there. People grasp this pretty readily.

My personal conviction is that the climate is changing dramatically and humans are contributing in a very large, if not the entire, way to that.

The overall message is that we can all agree the Earth’s resources are being depleted. Continuing to rely on those resources means not taking advantage of obvious opportunities to be leaders in the new energy economy when it comes. It’s not about climate change or about the human contribution — it’s ultimately about taking advantage of opportunities being presented to us by a dramatic shift in the way we live on our planet. In that, there will be leaders and followers, and I don’t think Americans are comfortable with being followers.

Correction: An earlier version of this story incorrectly named the advisory board retired Vice Admiral Lee Gunn serves on. It is the CNA Military Advisory Board.