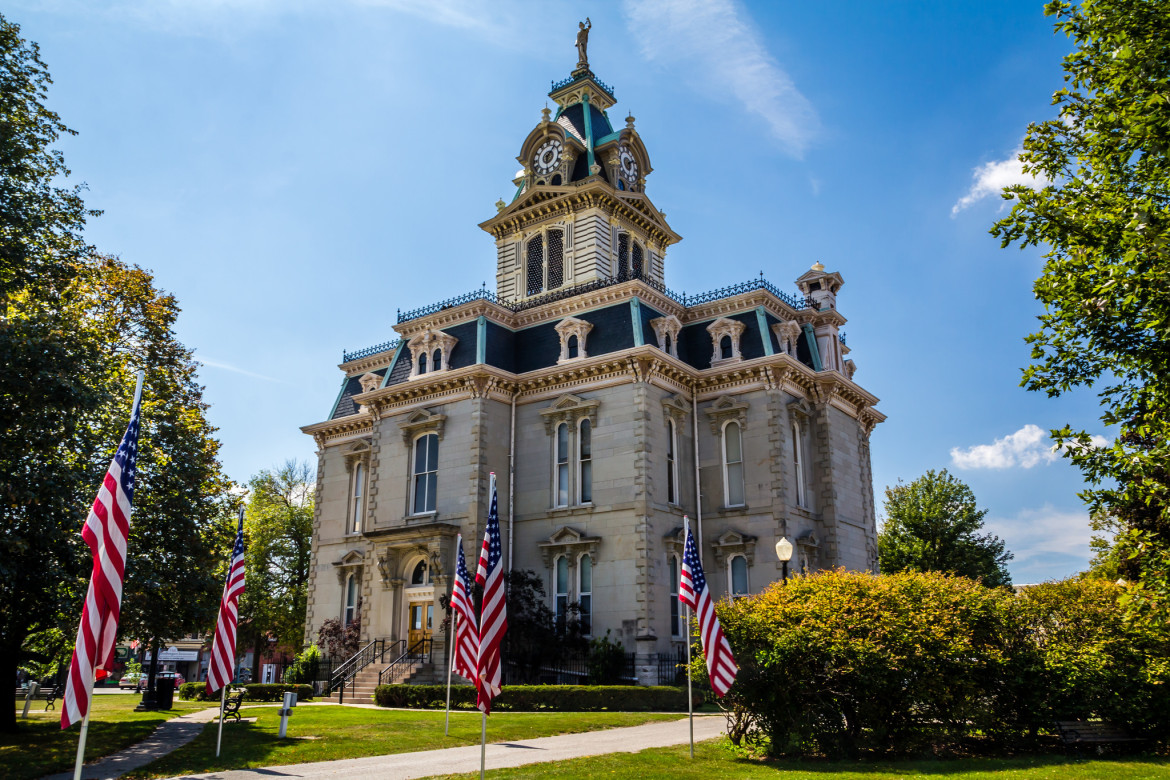 The Davis County Courthouse stands in the center of the city square in Bloomfield, Iowa.

Following the recommendations of a study last fall, a small Iowa town is instituting aggressive strategies to become energy independent by 2030.

The city council in Bloomfield decided to pursue the goal of energy independence after a pair of consultants and the Iowa Association of Municipal Utilities last fall produced a study that concluded that with a lot of efficiency upgrades and a relatively modest investment in renewable energy, the town could meet all of its electricity needs with locally-produced power.

One advantage Bloomfield has is a municipal utility, which tends to be more open to reducing power sales, said Tom Wind, one of the authors of the study.

‘A community served by an investor-owned utility has no say about where their power comes from.’

Iowa’s 136 municipal electric utilities “have a lot of flexibility to do different things because they are governed by the city council or a local board of trustees,” Wind wrote in an e-mail. “For example, they can tailor any new power-supply contract with the flexibility they need to accommodate local wind and solar generation. A community served by an investor-owned utility has no say about where their power comes from.”

Bloomfield’s city government has taken the lead in the energy-independence initiative.  The Iowa Economic Development Authority, which helped fund the study, is hoping the city can “create a model that could be adopted throughout the state,” according to Chris Ball, the city’s energy-efficiency director.

The initiative is pursuing many strategies to get there. For one, the city is one of 10 communities nationwide that has snagged a team of Operation Americorps workers. In Bloomfield, they will conduct energy audits without charge on about 800 of the city’s 1,200 homes. They will then make weatherization improvements in about 400 of them. Improvements will be done for free for those with low or moderate incomes, and for the cost of materials only for others.

One of the city’s goals is to reduce residential energy use by 5 percent over the next two years.

“That’s ambitious,” Ball said, “but it’s what they wanted to go after.”

The broader long-range goal is to reduce energy-use citywide by 23 percent, according to Ball.

The city also has obtained the services of some federal VISTA volunteers to devise an “on-bill” financing system that, Ball hopes, will be ready to pilot yet this fall. The idea is that a pot of city funds would be loaned out to property owners wanting to make efficiency upgrades.

The broader long-range goal is to reduce energy-use citywide by 23 percent.

“We hope it will reduce consumption enough that they’ll see enough of a reduction in their bill to make the loan payment,” Ball said. “We want to be as close to ‘bill-neutral’ as we can.”

Ball said he hopes the city will provide $150,000 this fall to cover improvements for 10 to 15 homes, after which he would apply for USDA funds to cover a second, larger round of loans.

This month, the city council is to vote on a comprehensive ordinance that would establish parameters on energy use within city-owned buildings, according to Ball. It would, for example, establish that thermostats should be set no higher than 70 degrees in the winter and no lower than 75 degrees during working hours in the summer.

It also would prohibit the use of miniature refrigerators, and would call for the use of some energy-saving technologies such as programmable thermostats and occupancy sensors that can turn off lights when they determine that a room is empty.

Bloomfield also is pursuing the development of a couple of renewable energy sources. The city utility this past summer signed a contract with its wholesale provider that specifically allows the city to develop renewable energy. It is envisioning a 1.5 to 2 megawatt solar array which Ball estimates would meet 8 to 10 percent of the city’s 2014 electricity demand.

The Iowa Legislature a few months ago expanded the state’s renewable-energy production tax credit to include a credit for 10 megawatts of solar power developed by municipal utilities. Bloomfield has applied for the credit, which Ball said likely would reduce the cost of the project by at least 6 or 7 percent. The Iowa Utilities Board, which is administering the credits, has not yet made any decisions about who will receive the tax breaks.

Ball said some energy companies have told him that they would lock in a rate for the city that would be less than it is currently paying its wholesaler.

Bloomfield also is looking at possibly installing a district geothermal system in the area of the town’s central square. The city government has been working on renovating the streetscape around the town square, and now has about half the funds required to do so. Future plans call for replacing streets and sidewalks on the main square with permeable pavers, and for creating a 10-foot-wide strip adjacent to the existing courthouse square. The city is contemplating sinking 300 geothermal wells there.

City personnel recently visited the town of West Union, Iowa, which installed such a system early in 2014.

Ball said that a couple dozen property owners on the square have expressed interest in tapping in to a geothermal system.

Although the city government initiated the move towards energy independence, it seems to be spreading. The Davis County Community School District in Bloomfield is investigating several clean-energy developments.

The district has been consulting with three solar developers about installing solar panels, and is considering LED bulbs. Because sensors have worked so well in the high school, Roberts said the district may install them in the rest of its buildings so that lights will automatically shut off in empty rooms.

The district also is considering overhauling its bus fleet. At the helm of the second-most sprawling school district in the state, Davis County schools administrators are interested in transitioning their diesel-fueled buses to propane, compressed natural gas or biogas, said the director of support services, Dan Roberts.

Although getting biogas established likely will be more complicated and costly than the other options, he said, “that’s where I think your long-term vision is.”

Ball pointed out that energy independence will require buy-in throughout the community, and that the city administration is “trying to generate as much conversation as we can” about becoming self-sufficient with regard to energy. He sees signs that it’s happening. One surfaced at his family’s home the other evening.

“I have a son in the 8th grade who came home last night and said, ‘I have a STEM (science, technology, engineering, math) project; do you know anybody who knows how to cut carbon emissions?’ ”

Aside from the fact that he is just such a person, Ball said, “It was encouraging that a STEM class in the 8th grade is looking at carbon emissions.” He sees it as a promising indication that discussion about getting to energy independence “will begin to percolate throughout community in different ways.”