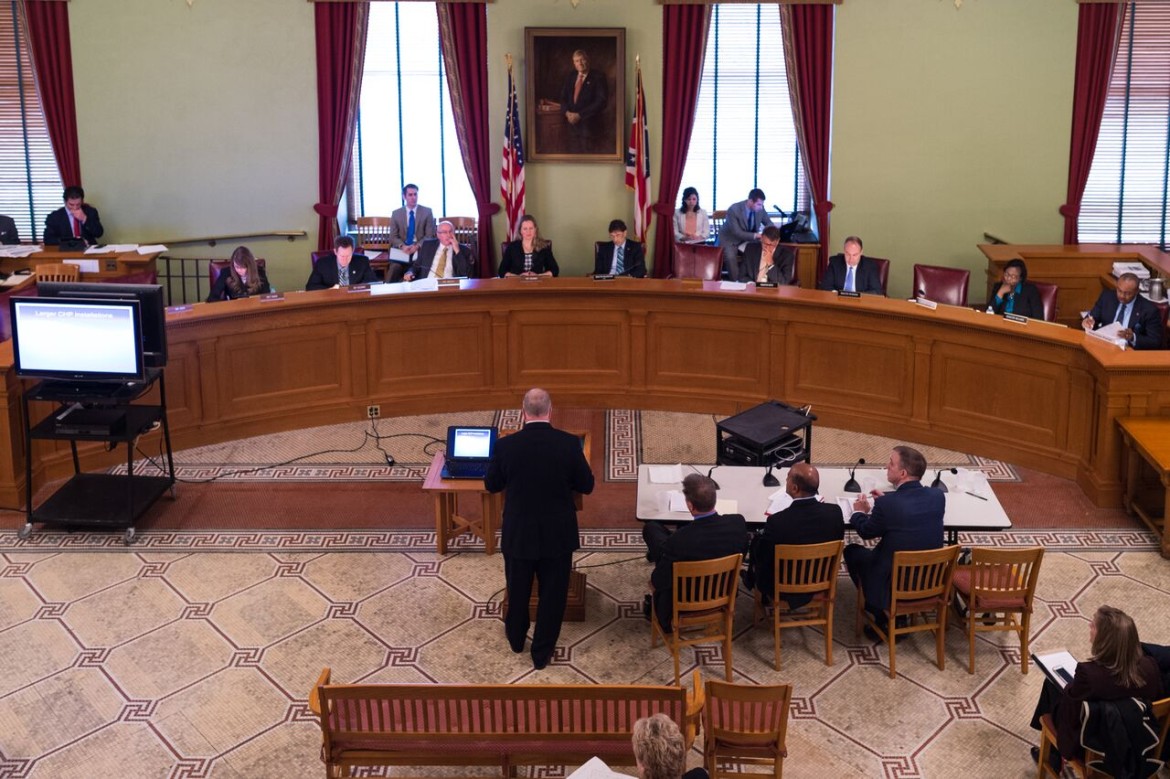 A report from an Ohio lawmakers’ committee left out crucial topics that state law required the group to consider in its review of the state’s renewable energy and energy efficiency laws.

On September 30, Ohio’s Energy Mandates Study Committee issued its final report, calling for an indefinite continuation of a current two-year freeze of any further requirements under the energy efficiency and renewable energy standards.

That freeze came into effect after Ohio lawmakers passed Senate Bill 310 last year. That law also set up the study committee and charged it to consider a variety of costs and benefits of the clean energy standards.

While the committee did hear some testimony on the benefits of the standards, those benefits are not mentioned in the final report. Critics, who had warned as early as this spring that testimony appeared to be largely one-sided, also note that issues such as health and climate impacts were overlooked.

The final committee report calls for an extended and indefinite suspension of the standards, based on “uncertainty” claimed to result from the federal Clean Power Plan rules, which are now final.

“I was disappointed at the suggestion of a permanent freeze,” said Mike Stinziano (D-Columbus). Together with Rep. Jack Cera (D-Bellaire), Stinziano issued an earlier report calling for the standards to resume.

Extending the freeze would be “kicking the can” on determining the best energy policy for Ohio, Stinziano said. “If we don’t take this seriously now, I’m not optimistic of a better window in time to address energy policies and what direction we would move forward in.”

“It’s the same outcome that members [of the legislature] have pursued when they sought a repeal,” Stinziano said.

Costs, but not savings

Even as it recommended an extended freeze, the report called for further weakening the clean energy standards and adding provisions that advocates say would benefit utilities and industry (see Midwest Energy News tomorrow for more on this topic).

Yet absent from the report was any discussion of multiple topics that SB 310 called for the committee to consider.

‘The committee appears to have cherry-picked only those data that best fit their preferred conclusion.’

“What’s most disappointing is the committee appears to have cherry-picked only those data—and some of questionable credibility—that best fit their preferred conclusion: that the standards should not return,” said Samantha Williams of the Natural Resources Defense Council. “The final report is completely devoid of the mountain of evidence available demonstrating the years of cost-effective savings these clean energy standards have provided.”

“This report talks about all the costs” of utility-based energy efficiency programs, agreed Martin Kushler of the American Council for an Energy-Efficiency Economy (ACEEE), “but it has no data and no discussion of the savings you get.”

Although ACEEE was not invited to testify before the committee, it submitted a report to the committee in August, detailing the savings Ohioans have realized under the state’s energy efficiency standard.

The report’s authors “don’t talk about climate change. They don’t talk about the health problems associated with burning coal to produce power,” said Mike Foley, Director of Sustainability for Cuyahoga County. Those “external problems” are “reasons that it’s important to develop more renewables,” he added.

“The committee had no speakers and did no research on the impacts of clean energy on the environment or public health,” said Jen Miller of the Ohio Sierra Club. “We know these standards were reducing air pollution and air pollution-related illnesses like asthma.”

The absence of any discussion of health impacts is even more notable because several environmental groups provided the committee with a report on health benefits forecast from resuming the standards.

“While the report goes out of its way to cast the Clean Power Plan as a villain, nowhere does it acknowledge this policy’s critical role in cutting carbon emissions from the power sector—the single biggest driver of climate change in the nation,” Williams said.

U.S. EPA data show that the electricity sector is responsible for 31 percent of the United States’ carbon emissions, which contribute to global warming and climate change.

In addition to health problems, impacts linked to climate change include extensive economic and property losses from extreme weather, as well as widespread disruption of habitats and species.

And although the report noted litigation challenging final rules for the federal Clean Power Plan, it did not discuss how energy efficiency and renewable energy could reduce Ohio’s costs for eventually complying with those rules, noted Miller and Williams.

‘Gutting the clean energy standards makes our work harder as a state in meeting the Clean Power Plan.’

“The most cost-effective tools for complying with the Clean Power Plan and tackling climate change in general are energy efficiency and renewable energy,” Miller said. “Gutting the clean energy standards makes our work harder as a state in meeting the Clean Power Plan because it allows utilities to continue to show preference to old, dirty fossil fuel plants.”

In fact, utilities that supported SB 310 have asked Ohio regulators to have all ratepayers guarantee sales for affiliated coal plants and a nuclear plant. Opponents argue that those deals would create unfair preferences for uncompetitive plants and amount to “bailouts.”

“These proposals are a major step backward for Ohio, but the study committee report is strangely silent on the issue,” noted Ted Ford of Ohio Advanced Energy Economy.

In any case, Kushler said, Ohio’s clean energy standards were adopted well before the Clean Power Plan was even proposed. In his view, they would provide benefits regardless of any litigation’s outcome, so resuming them would be “a totally no-regrets approach.”

Similarly, the September 30 report was silent on job growth and business opportunities that advocates say the renewable energy and energy efficiency standards promote.

“The two year freeze enacted last year in SB 310 was presented to the public as a necessary ‘time out’ to objectively evaluate the costs and benefits of the energy standards,” said Ted Ford of Ohio Advanced Energy Economy.

“This time-out was offered as a harmless and prudent measure, but in fact it was a major setback to Ohio’s fast-growing advanced energy industry and the new jobs it was creating,” Ford continued. “Now, after a year of ‘study,’ it’s clear that the authors of the report simply intend to shut down the clean energy sector in Ohio.”

Governor John Kasich’s office and Ohio EPA Director Craig Butler have already stated they disapprove of the indefinite freeze on the standards recommended by the September 30 report. For now, however, debate and uncertainty over the content of those standards will continue.

“We fully expect that the governor is going to step in and stay true to his support for clean energy that he’s expressed in the past,” said Trish Demeter of the Ohio Environmental Council. “Or else, Ohio’s just going to get left in the dust in the clean energy era and the progress that we’re making towards a cleaner, brighter energy future.”