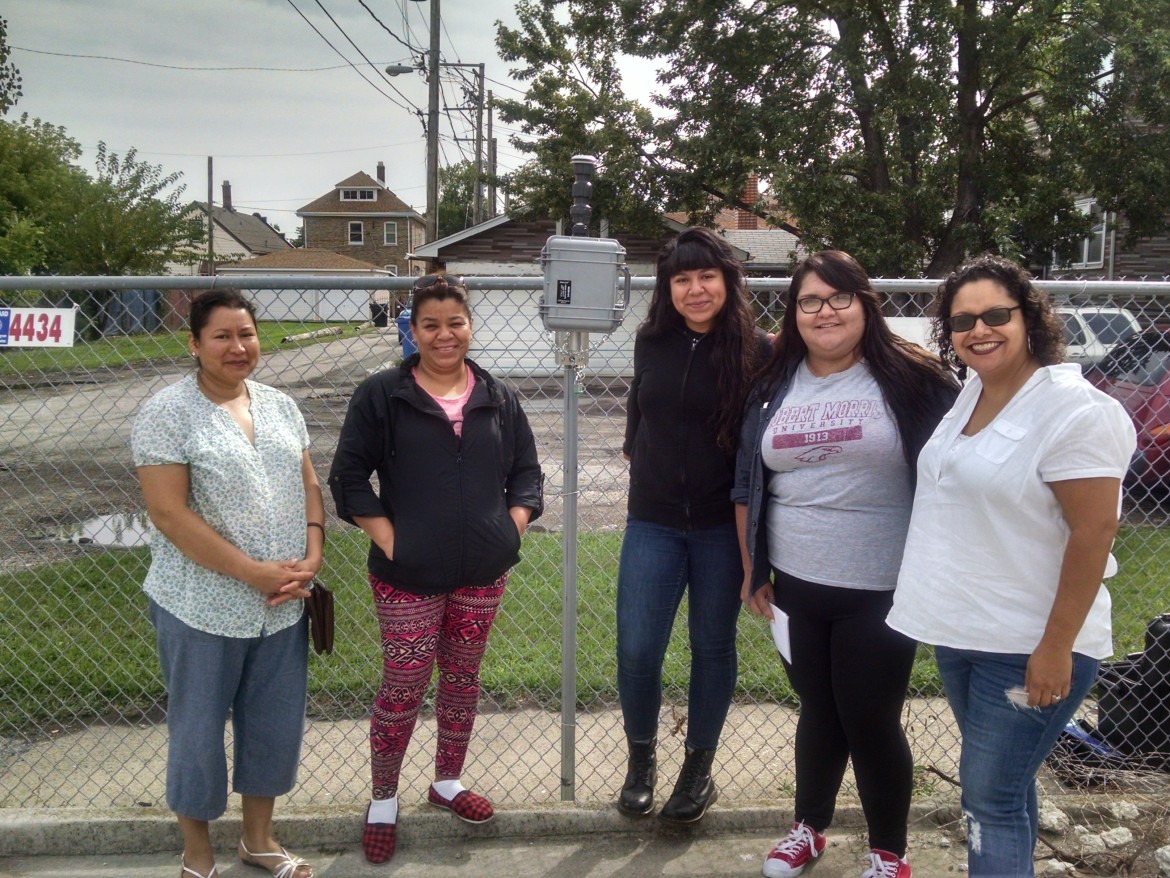 Kim Wasserman, right, and other Little Village residents with the diesel air monitor.

A proposed mayonnaise factory in Chicago’s Little Village would bring jobs to the struggling immigrant neighborhood.

But it would also bring more diesel emissions, with up to 500 more trucks a day driving through the dense residential neighborhood to the facility, which would be right near an elementary school. Construction of the plant would also mean heavy diesel-powered equipment operating for weeks.

This all worried the Little Village Environmental Justice Organization (LVEJO), which got international attention for its successful years-long campaign to close down Chicago’s coal plants. While the 2012 closing of the Crawford coal plant in Little Village meant cleaner air, diesel emissions could pose a potentially even more serious problem.

Diesel exhaust from trucks, trains, construction equipment and other vehicles contains fine particles known as PM 2.5 that can penetrate the lining of the lungs and enter the bloodstream, causing damage to organs and increasing risk of cardiac and respiratory disease and cancer.

But as LVEJO director of organizing and strategy Kim Wasserman explained, residents have almost no concrete information about the current level of diesel emissions in the neighborhood and the increased risk the Hellman’s mayonnaise factory would pose.

There’s no doubt that diesel emissions are a serious problem in Chicago, especially in communities like Little Village that are near major trucking routes, highways and rail yards. But no one knows exactly how bad the problem is currently, in part because Illinois air monitoring data for 2011-2013 that is required by the federal government was deemed “unclassifiable,” reportedly because of laboratory mishaps during its analysis.

Because of this failure and in hopes of raising awareness of and curbing diesel emissions more generally, last year the Environmental Law and Policy Center (ELPC) and the Respiratory Health Association of Metropolitan Chicago launched their own diesel monitoring project. They have been partnering with community groups to measure diesel emissions in particularly vulnerable communities – home to high numbers of low-income residents and children and elderly people, who are most susceptible to the health impacts.

“This was exactly what we needed,” said Wasserman, who received the prestigious 2013 Goldman Environmental Prize for her efforts around the coal plants. “We needed baseline information – what is the status of air quality and how would these trucks impact it?”

For two weeks in September, LVEJO members tended the ELPC diesel monitor that was stationed in between the proposed site of the mayonnaise factory and Emiliano Zapata Elementary Academy.

Residents working with the ELPC have collected and stored the filters from the high-tech air monitor, and the results will be analyzed and released early next year.

The results will help civic leaders and officials understand the scope of the problem with diesel emissions in Chicago, and also raise awareness among regular people. That, they hope, will help lead to regulations and voluntary efforts to curb diesel pollution.

The U.S. Environmental Protection Agency (EPA) has a wide-ranging program to reduce diesel emissions from vehicles including trains, trucks, school buses, construction equipment and ships, with different requirements kicking in for different types of vehicles over a series of years.

But existing equipment is exempted from some of these regulations, meaning that dirty, archaic locomotives, construction equipment and other vehicles are allowed to continue operating for many years.

And city officials have little power over major sources of diesel emissions, since railroads and trucks are regulated federally and municipalities are generally not allowed to regulate them.

Hence Chicago has targeted diesel-burning construction equipment as one way to reduce emissions on a local level. In 2011 the Chicago City Council passed a clean diesel ordinance demanding that city-funded construction projects worth more than $2 million use clean diesel equipment, meaning either cleaner new equipment or older equipment retrofitted with pollution controls.

The ELPC says that this ordinance – which the organization helped draft – has made meaningful improvements to city air quality. But its scope is limited, since it applies only to departments that are directly controlled by the Mayor’s office – aviation, transportation and water. Construction projects carried out by “sister agencies” including the police department, the public schools, the housing authority, the transit authority, the park district and the Public Building Commission – which oversees construction – are not covered.

The ELPC is currently working with members of the City Council to prepare an amendment to the ordinance that would widen its scope. They are also working directly with construction firms and with agencies and private companies that hire construction firms, to persuade them to voluntarily use clean diesel equipment.

‘There are scrubbers built for almost every type of construction equipment.’

“The fact that you’re not required to buy new equipment [under federal standards] means that a lot of old stuff is out there on construction sites,” said ELPC attorney and senior policy analyst Susan Mudd. “There are scrubbers built for almost every type of construction equipment, so it can be cleaned up without buying a new one, and can be almost as effective as new equipment.

“It’s something that can be done at the local level instead of tackling a whole set of national standards.”

In March, the Illinois Medical District Commission, representing the nation’s largest urban health complex with 2,200 beds, passed a resolution promising to “adopt standards addressing diesel engine pollution reduction and clean construction practices for the various activities conducted within the District including but not limited to construction and land development.”

Mudd said a hospital in the Englewood neighborhood, an impoverished, African American community that is adjacent to a rail yard, has also promised to use clean diesel. The ELPC did air monitoring in Englewood last year.

And in August, the ELPC announced a partnership with the construction firm Leopardo Companies wherein the company agreed to use the cleanest diesel equipment available on a 265,000-square-foot retail complex under construction in the city’s North Side Lakeview neighborhood. Half of the equipment used on the site meets the EPA’s “Tier 4” stringent diesel standards, with retrofitting done on older equipment, including a 300-ton crawler crane.

The Southeast Environmental Task Force has gotten much attention for its battle against massive piles of petroleum coke, or petcoke, stored in the neighborhood. The group is also concerned about diesel emissions from the trains, trucks and barges that ply the streets where heavy industry and homes sit side by side.

So in August, task force members stationed the ELPC monitor at a home near trucking and rail routes and not far from the Calumet River, where tugboats pushing barges carrying material including petcoke emit diesel pollution.

“Hopefully this will help us with our efforts to clean this area up, and let people know what they’re exposed to,” said task force executive director Peggy Salazar. “We know the locomotives idle here, the river is nearby, there’s a main intersection with industry and truck traffic. It would benefit us to know what exactly we are being exposed to.”

Community volunteers need to change the air monitor’s filter each day and keep the filters frozen to preserve them until they are analyzed by a lab. All the filters will be analyzed at the same time, at the end of the monitoring project, to ensure the results are comparable and not influenced by small variations in conditions inside the lab.

The monitor, an Air Metrics MiniVol Tactical Air Sampler, extrapolates diesel emissions by the change in weight in the filter after it collects particulates from the atmosphere. And since a new filter is collected every 24 hours, the results can be compared to federal standards for 24-hour emissions.

Mudd noted that the limited monitoring being done by the ELPC and community groups can’t approximate the scope of the data that was supposed to be collected under federal rules, and was lost. But it can provide insights that even the EPA-mandated data would not. While the EPA data is used to show ambient levels of pollutants across a wide region, the ELPC’s monitor is more specific to the blocks where it is placed.

“It can help citizens understand on a granular level, is there a problem at this corner, is this a hot spot,” she said.

Most recently, the monitor was stationed at the Shedd Aquarium on the shore of Lake Michigan. While this is not an area typically associated with pollution, it was a way to raise awareness among large groups of residents and tourists and build on the aquarium’s commitment to environmental education and sustainability.

Not an idle threat

While there isn’t necessarily heavy truck traffic or construction around the aquarium, there are many idling buses – another source of diesel emissions, as Salazar noted.

The city has an ordinance on the books that prohibits idling. But the ordinance is rarely enforced, according to the ELPC and community leaders. So they are urging people to call 311 – the city’s non-emergency service number – to report idling diesel vehicles. And they are asking the city to put up more signs prohibiting idling.

“It starts off that everyone’s a little leery” of being responsible for the air monitor, she said. “It sounds like a huge job, you have to change the filter every day. But as I collect them I hear that people have learned a lot, the neighbors keep coming up to talk about it, it’s a very good tool in engaging people who never thought about air issues. And people have become mobilized to call 311 to enforce the idling ordinance. It’s a great community engagement tool.”

Wasserman said Little Village residents are eager to see the results of the air monitoring. Though the mayonnaise factory is likely to move forward regardless, the group hopes they can convince the company to take measures to reduce diesel emissions.

“We’re hoping to use this information to continue the conversation and put pressure on Unilever” – Hellman’s parent company, she said. “We want to be able to work together to ask them, ‘How do we do this so you’re a good neighbor?’ We didn’t fight for 12 years to shut down the coal plant and then have our air get worse because they want to bring more diesel to our community.”

Correction: An earlier version of this story misstated how much of the diesel equipment at Leopardo Companies’ construction site meets Tier 4 EPA standards. About 50 percent of the equipment is Tier 4.