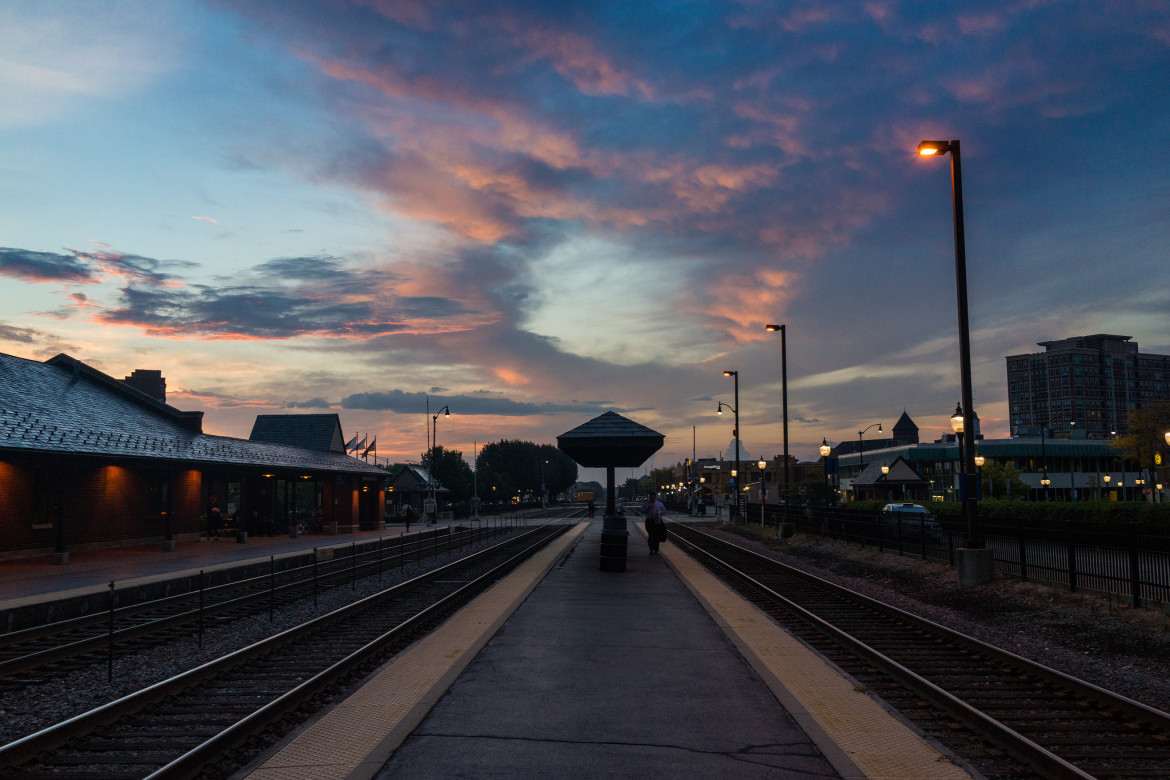 The Metra commuter rail station in Arlington Heights, Illinois, a suburb that is working to be less car-centric.

Jeffrey Wood is seeing it not only in his home state of California but in places like Minnesota and Ohio: Developers are building dense multifamily projects near existing commuter train stations not just in big cities but in the suburbs surrounding them.

And after the stations come in? Retailers, restaurants and theaters are following, creating walkable business districts in suburbs that have historically been centered around the automobile.

Wood, principal of The Overhead Wire, a San Francisco-based consulting firm that focuses on the steps cities can take to become more transit-friendly, said that this trend is only gaining strength.

“There will always be a market for traditional single-family living in the suburbs. But there is also a market for urban living, even in suburban communities,” said Jeffrey Wood, principal of The Overhead Wire, a San Francisco-based consulting firm that shares information about cities and public transportation.

“We had been so singularly focused on expanding and building single-family subdivisions that we neglected our cities and urban areas,” Wood said. “That is changing. The demand for urban living is coming back. We need to create a supply of more of those types of places to meet that demand, in both big cities and the suburbs.”

Researchers at Chicago’s DePaul University have discovered the same thing when in 2012 they ranked the top transit-friendly suburbs in the Chicago area.

“Walkable communities can work if you have that access to public transportation,” said Schwieterman, director of the Chaddick Institute for Metropolitan Development at Chicago’s DePaul University. “You don’t have to be in a major city. And it’s nice to see that so many of the suburbs of Chicago have invested in transit-oriented development. Many of them really are trying to encourage residents to spend more time walking in their communities and less time driving.”

The Chicago suburbs aren’t alone. Suburban communities across the country are creating public-private partnerships to encourage developers to build dense apartment buildings near existing train stations. The hope is that once the apartments are there, retail and service businesses will follow.

This is a positive for the environment, encouraging residents to use public transportation and leave their cars parked. But suburbs aren’t just building their own walkable downtown centers because they want to be green. They’re also doing it to compete with the big cities near them.

Major cities are seeing an influx of people moving into their downtown cores. Suburban officials recognize that to complete, they’ll need to build their own walkable downtowns filled with restaurants, shops and multifamily housing.

Transit-friendly in the Chicago suburbs

As part of this ranking, three-people teams visited each of the train stations in qualifying suburbs. These teams made sure that train schedules were posted and easy to find, the station lit up brightly in the evening hours and that clocks were clearly visible. Teams stood on platforms and looked across the street, hoping to see retail storefronts that would entice commuters to hop over for a cup of coffee or a quick sandwich.

Team members even did a white-glove test, testing station benches, counters and walls for dirt and grime.

“People liked the idea of the white-glove test,” said Schwieterman. “But it is important if you are trying to create a walkable, transit-friendly community to have a train station that actually functions well.”

That issue bumped Naperville down the list of transit-friendly Chicago suburbs. The top of DePaul’s list? LaGrange, which boasts a large train station, frequent service into Chicago and a thriving downtown filled with restaurants, shops, apartment buildings and entertainment options.

Yonah Freemark, manager with Chicago’s Metropolitan Planning Council, said that the suburbs around Chicago are “investing rapidly” in transit-oriented developments, with many of them offering tax incentives to developers, encouraging them to build dense apartment developments with first-floor retail around existing commuter train stations.

“This was delayed at first by the recession, but now we are seeing this kind of development taking place at a much more rapid pace,” Freemark said. “It is absolutely something that suburbs all around the region are looking into.”

Freemark cites Oak Park, an older suburb only about 8 miles from downtown Chicago. Oak Park already features a busy, and pedestrian-friendly, downtown but now a 21-story apartment building is under construction near the suburb’s Metra commuter train station. The new development will include 270 apartments and 25,000 square feet of ground-level retail.

“It’s all about creating an environment in which people want to walk,” Freemark said. “You need the retail and the restaurants to encourage people to walk the streets and not get in their cars. The suburbs have realized that they can do this just like bigger cities have done.”

Freeing Eden Prairie from the car

The Minneapolis suburb of Eden Prairie has long been tied to the automobile, but a planned light rail connection to downtown Minneapolis could change this.

Regina Dean, senior planner with Eden Prairie, said that this suburb’s city council on Oct. 6 will take a second look at a series of ordinances that would encourage transit-oriented development around three future rail stations.

The ordinances will rezone patches of land within a half-mile radius – or a 10-minute walk – of the future station sites, Dean said. The ordinances, once approved, will call for mixed-use, residential and commercial – mostly light industrial and tech development – uses around the stations.

Eden Prairie already has one example of transit-oriented development around an existing bus terminal that will also be home to a future light rail station. A multifamily building sits immediately to the west of the station. Retail and restaurants are located a short walk away. A public park is just to the south of the station.

Dean hopes that the transit-oriented development ordinances will encourage similar development around the new train stations.

“Right now, our downtown area has many surface-level parking lots,” Dean said. “The city has been auto-oriented for a long time. We are trying to create a more pedestrian-friendly community here. We think the addition of the light rail stations gives us the opportunity to do that.”

The village of Arlington Heights, Illinois, northwest of Chicago, provides a good history lesson on how transit-oriented development can succeed in the suburbs.

In the 1990s, Arlington Heights’ downtown was filled with vacant storefronts. No one walked the streets. City officials created a TIFF district, and used the revenue to entice developers to build apartment buildings and street level retail. The village itself purchased several lots for future redevelopment.

Today, Arlington Heights ranks as one of the most transit-friendly downtowns in the Chicago suburbs. Retail, restaurants and apartment buildings surround the village’s commuter train stations.

“There used to be empty gravel lots here,” said Charles Witherington-Perkins, director of planning and community development for Arlington Heights. “Now we have a six-screen movie theater. We have 35 to 40 restaurants downtown. There are events here all the time. It really has become the center of our community.”

Arlington Heights’ transit-friendly downtown has had a positive impact on the environment, too. According to a 2004 survey, 67 percent of the residents living in or near downtown had just one vehicle for their households. The vast majority of residents living in the rest of Arlington Heights had at least two cars per household, Witherington-Perkins said.

The suburb of Westlake, Ohio, about 17 miles from Cleveland, provides another example of the concept working.

Crocker Park in Westlake is a mixed-use lifestyle center with retail, office and residential uses. The development already has 218 apartments located on the second level of its retail strips, and another 318 multifamily units are now under construction. Late this year, a Hyatt Place hotel will open in the community.

The goal here, too, is to keep people walking. Residents living here might not even have to travel to Cleveland to work. Companies such as Fidelty Investments, Scotttrade, Compass Bank and AAA all have offices in or near the development. For those who do need to go into the city, Crocker Park has its own bus stop that can shuttle workers out of Westlake and into downtown Cleveland.

Gary Cooper, senior vice president and principal with the Cleveland office of commercial real estate firm Colliers International, said that while Crocker Park might not be a traditional downtown like the one now enjoying a renaissance in Cleveland, it is certainly an area that feels like its own walkable community.

“This is a wonderful place to live,” Cooper said. “Of course, there’s not as much in Crocker Park as there is in downtown Cleveland. But you do have all the shops and restaurants you could want. You can live there and hardly ever have to get into your car for anything.”

Wood said he expects more suburbs to invest in transit-oriented development. But he warns that new dense developments won’t succeed if these suburbs don’t already have transportation options to get residents into the big cities near them. He says that buses or trains must arrive in these developments at least every 15 minutes.

“You can’t fake it,” Wood said. “That public transit element has to be there, and it has to be strong.”