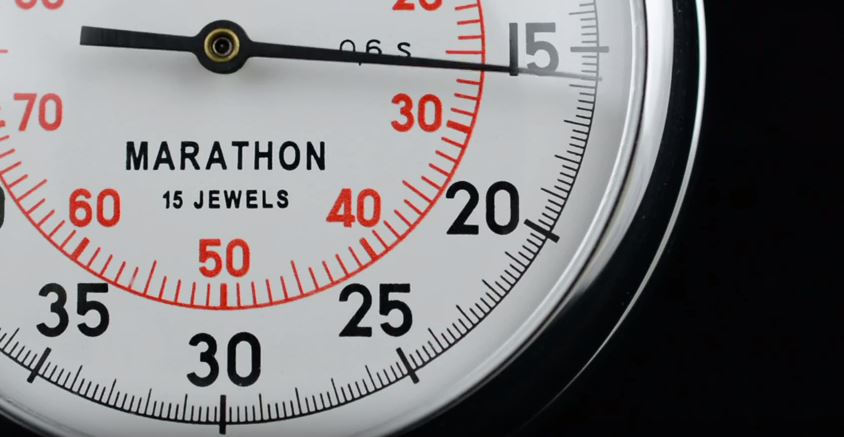 A still from a television ad produced by a utility-backed advocacy group shows a stopwatch counting down to pending coal plant closures.

In what critics are calling misleading “scare tactics” to push utility-backed legislation in Michigan, a nonprofit advocacy group has launched a new ad campaign with a ticking clock counting down coal plant closures.

The website for Citizens for Michigan’s Energy Future — a 501(c)(4) advocacy group backed by the state’s two largest investor-owned utilities — features a clock counting down the months, days, hours, minutes and seconds until the last in a group of coal plants are scheduled to close. Television ads follow a similar theme.

The campaign says nine coal-fired power plants “will go cold and dark” by April 15, 2016, “helping to create a 1.3GW capacity shortfall.” The plants are closing due to old age and environmental regulations.

But critics point to more recent projections from the grid operator MISO showing its regional footprint actually faces a capacity surplus next year. Staff at the Michigan Public Service Commission also reported this summer “there is not likely to be a shortfall” in the Lower Peninsula next year.

“If we followed the advice that we’d have to move at unheard-of speed back in April, we’d have an energy policy in Michigan that was completely off the mark,” Laura Chappelle, an attorney and former chairman of the Michigan Public Service Committee, said referring to earlier MISO estimates of a capacity shortfall.

Chappelle is also a representative with Energy Michigan, a trade association representing independent power companies in the state.

“There’s a real issue with retiring plants,” she added. “But the fact is: Michigan utilities have imported power for decades. They have been relying on power from out of state for decades and we’ve always had reliable energy and capacity in Michigan.

“This thought that we’re only going to survive in Michigan if we build excess capacity is a fallacy, a scare tactic.”

Kelly Rossman-McKinney, spokesperson for the utility group, responded: “No one knows better what the needs of Michigan residents are in terms of electricity than the hometown power providers that have been serving Michigan for decades. This is very real.”

“Absolutely not,” spokesperson Dan Bishop said when asked whether he thinks the message is a scare tactic. “This is an incredibly serious issue facing Michigan. Reliable electricity is the foundation of our economy.”

Bishop said that in recent filings with the Michigan Public Service Commission, Consumers projected adequate capacity for its 1.8 million customers over the next five years.

“We’re in good shape. The reliability concern primarily has to do with the alternate electric suppliers,” he said.

Sarah Mullkoff, energy program director for the Michigan Environmental Council, said of the ad campaign: “There is no capacity shortfall. MISO, the folks in charge of managing the grid, have made it clear that Michigan actually has excess capacity. This is an attempt by the utilities to hang on to old, inefficient coal plants they should have shut down years ago.”

Rossman-McKinney said there is “no guarantee” on the availability and price of importing power. She added that MISO has adjusted its capacity predictions before and could do so again.

In June, MISO released its annual survey of states within its region for resource capacity projections for 2016. Last year’s survey predicted a capacity shortfall across the MISO footprint of 2.3 gigawatts. This year’s shows a minimum 1.7-GW surplus.

In the latest MISO survey, Michigan’s Lower Peninsula is one of two zones in the grid operator’s footprint projecting a shortfall for 2016. However, MPSC staff said that survey did not account for a new natural-gas plant coming online in northern Michigan.

The Michigan Agency for Energy reported to a Senate committee in September that 25 coal units are expected to close by 2020.

The ads go on to encourage residents to write their lawmakers in support of proposed bills by Michigan Republicans that are backed by Consumers Energy and DTE Energy.

Those bills — SB 437, SB 438, HB 4297 and HB 4298 — would create tighter restrictions for customers participating in the choice market, eliminate efficiency and renewable standards in favor of Integrated Resource Planning and eliminate the state’s net metering program, among other things.

Rossman-McKinney said the proposed legislation would offer “predictability” for utilities going forward, and claimed alternative energy suppliers have been “resistant” to the IRP process.

Chappelle said a reliable solution is “an honest mix of resources — both in-state and utilizing market alternatives — and allowing the most cost-effective renewable or base-load or peaking resources to meet your needs. It shouldn’t always be the utilities.”

The issue of predictability for utilities is similar to what is playing out in Ohio, where utilities are pushing for long-term power purchase agreements that financially support coal and nuclear plants. Unlike Michigan, Ohio has a fully deregulated market, which utilities say is threatening their business models amid proposals for help to keep plants open.