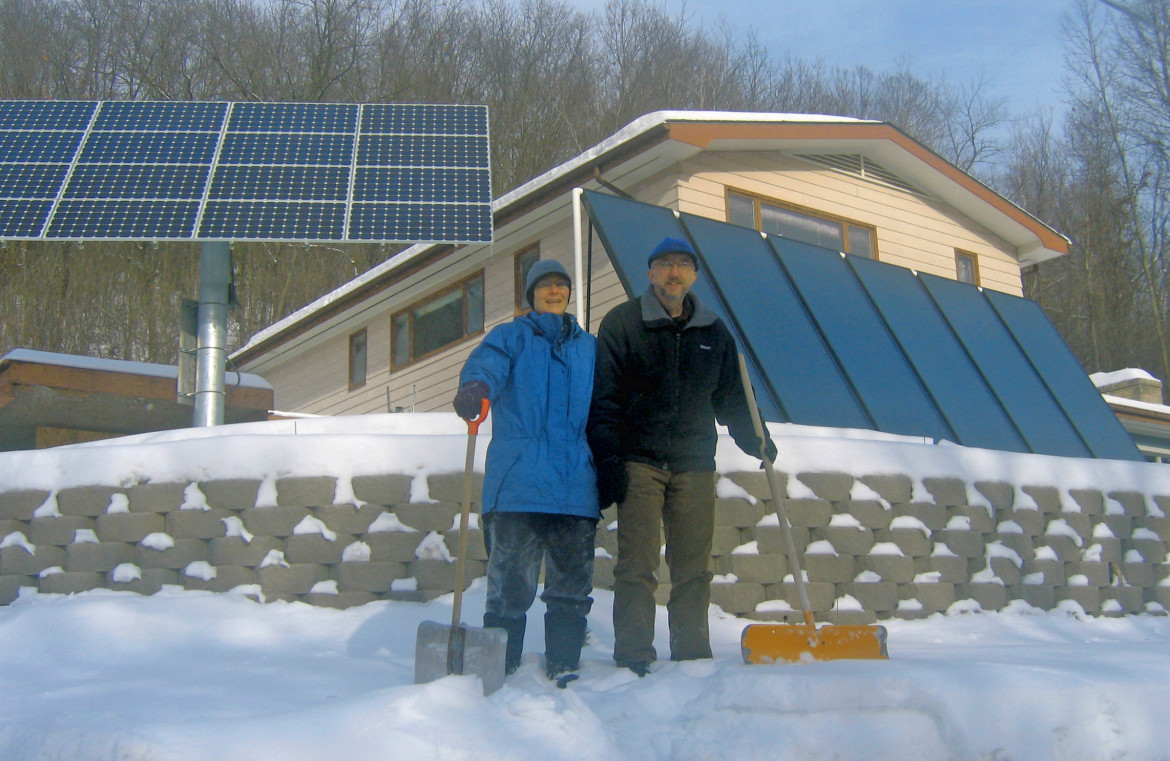 Chris and Paul Meyer in front of the solar array on their home in Winona, Minnesota.

Last year Chris Meyer gathered around 15 people and created an ad-hoc group in the southeast Minnesota town of Winona to either create a local solar garden or attract a developer to the area.

The organization’s odyssey is a case study in both the challenges of bringing community solar to a largely rural area of the state and selling it to people who have never heard of the concept and may not understand what it would mean to them.

Power Up Winona Community Solar started just after the state legislature created the community solar program that would impact Xcel Energy’s territory in Minnesota. The largest utility in the state, Xcel provides electricity to more than 1.2 million people, including many in Winona.

Using a grant from the Clean Energy Resource Teams, Meyer and fellow activists looked at all the possibilities for community solar before arriving at a conclusion, and attracting a partner, to move forward on a potential project.

They met with people at the Frozen River Film Festival and other events in Winona to gin up interest in community solar. Earlier this year Sunshare, a solar developer, did a “Community Solar 101” class that more than 60 people attended.

Much of the group’s time was spent explaining how community solar developers want homeowners and institutions to sign 25-year contracts in return for reduced electricity bills.

Meyer, secretary of the Minnesota Renewable Energy Society, spoke to Midwest Energy News about Power Up Winona’s goal to bring a 1 megawatt project to the area and where the community solar concept stands today.

Midwest Energy News: What was your initial idea?

Meyer: We thought the profits which could be made from community solar could be substantial and we thought maybe the city could be the owner. But our attorney said that would not be cost effective for the city and it would require a substantial investment that was probably not worth it.

We had to convince a developer we have enough people who would subscribe so they will come here and deal with some of the restrictions. The property available for community solar is pretty limited – if you look at a utility map Xcel’s territory goes down the Mississippi River but a lot of the land in Winona County is in Tri- County Electric Cooperative’s (coverage) area. So we knew it might be hard to find land for a developer.

But you found one, right?

Yes, Sunshare has agreed to build a solar garden – but where and when remains to be seen.

Does Tri County Electric have a community solar garden?

It does have a small garden.

How else did you help?

We spoke to Southeast Technical, Winona State, the city, the public school system and St. Mary’s College about the community solar and asked if they would have any land and if they would get involved.

What were the challenges of describing community solar?

The initial ideas for community solar had institutions and homeowners paying for the panels. But that’s not an easy pitch, especially for the public school system or colleges that don’t have hundreds of thousands of dollars to buy panels upfront. Then the pay-as-you-go subscription model came along and that made more sense.

How did large users respond?

They see the advantages. They’re going to save 10 or 15 percent on their electricity bills and the 25 year contract doesn’t matter because they’re not moving anywhere. The facilities’ director and sustainability committee at Winona State were interested and helped out, as did the facilities director at St. Mary’s.

How about residential customers?

Describing community solar was difficult. Developers offer a lower rate of return to homeowners. They say you can save 5 percent on your electric bill. But that means you would give 95 percent of the applicable retail rate for your electricity back to the developer. Your savings is not much money on each month’s bill – and maybe $60 over a year for many people.

So it didn’t sound like a deal, did it?

The developer might say you will save a few thousand over 25 years based on your electrical usage. That might be 5 percent on your electricity bill. But people would see the developer earning many times more than that. When people saw that they got angry, to my surprise. Their reaction was that the developer would be making all this money off something called “community solar.” I saw that reaction a number of times.

What did you say in response?

I told them I paid $40,000 for my solar array and it’s my problem to make back the investment. I compare this to someone who can subscribe to community solar for almost nothing and save 5 percent on their electric bill. And I ask how could you complain about that? But when they find out they get only five percent and the developer gets 95 percent they find that very disturbing.

Do they get over it?

After I give them my perspective many of them reconsidered.

Were there other issues?

Some people are worried that if they leave the area they may not be able to take their subscriptions with them. They wonder what will happen if they leave Xcel’s territory.

How do you see community solar now shaping up?

Sunshare still plans to offer homeowners a lump sum payment option for 25 years, and it’s a great deal. Your return will be better for residential if you pay upfront than subscribe, and I know several people who will take that option. For institutions it’s better to subscribe to the program and pay monthly because it’s such a good return. That’s at least how I see the market.

We’re waiting for Sunshare to make an announcement. Some places have to be guinea pigs for community solar, and we’d like Winona to be one of them.