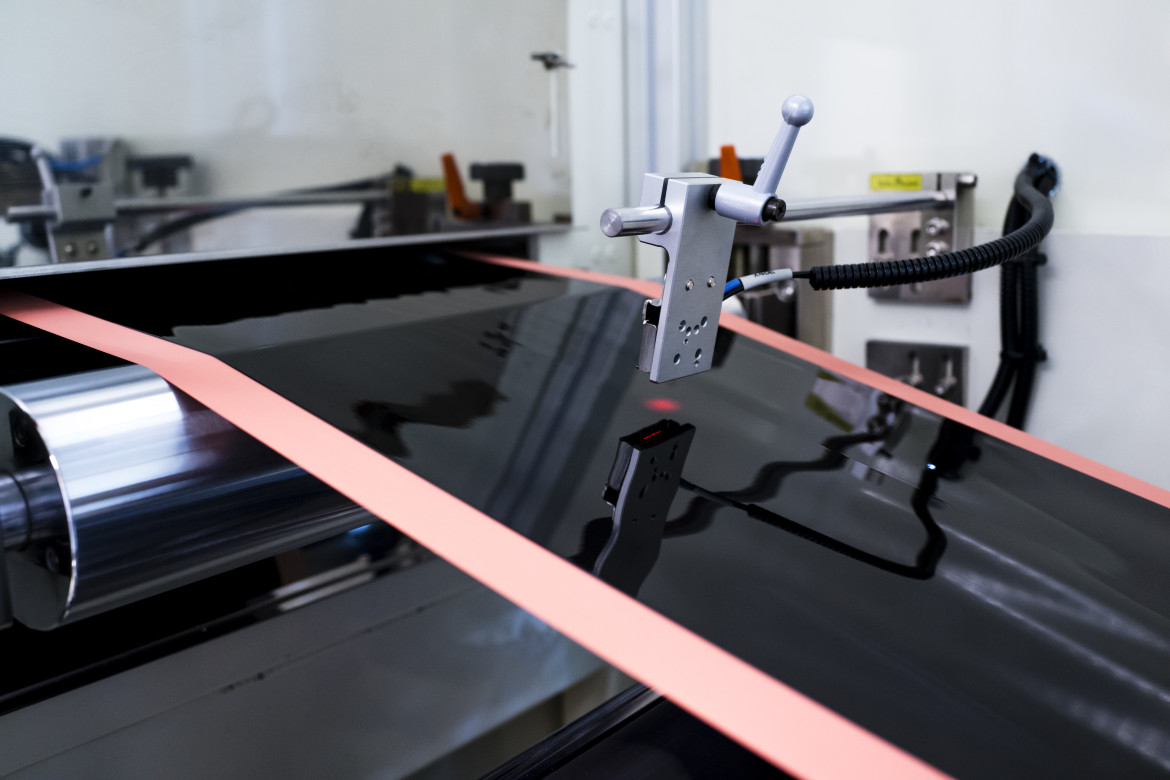 This sensor allows for consistent double-sided coating of electrode to copper sheeting at the University of Michigan Energy Institute’s Battery Lab.

And while the project is driven primarily by automotive research interests for now, its directors see that as just the beginning of a broader energy storage movement.

In October, the University of Michigan’s Energy Institute launched the new 2,700-square-foot Battery Fabrication and Characterization User Facility with $900,000 from the university’s engineering school, $5 million from the Michigan Economic Development Corporation (MEDC), and $2.1 million from Ford Motor Company.

The new lab also serves as a centerpiece for the university’s participation in the Joint Center for Energy Storage Research (JCESR) and the CERC-Clean Vehicles Consortium.

According to Energy Institute director Mark Barteau, the investment is critical to making breakthroughs to bring both electric vehicle and grid storage applications to scale.

“Part of the challenge is scalability,” says Barteau. “The more we can help advance the technology in terms of stability, lifetime, energy density, all the things important for transportation applications, those will also make batteries more viable for grid storage applications.”

At this point, however, the main driver of the facility is decidedly transportation-focused. No electric utility or grid system operator is directly involved. But that’s just the start, according to Barteau.

“Ford is one of the major sponsors and obviously their business is transportation,” says Barteau. “But in fact, the MEDC is an even more substantial sponsor. Their goal is to help support and accelerate the full spectrum of battery R&D in the state of Michigan.”

Jeff Chamberlain is director of Argonne National Laboratory’s Collaborative Center for Energy Storage Science and serves as external integration officer with JCESR. He worked with the University of Michigan and MEDC to launch the battery lab. He notes that historically, battery research has been driven by diverse business sectors. In fact, the initial concept for the first lithium-ion battery was developed by Exxon.

“In the 1970s, in the middle of the oil crisis, Stan Whittingham developed the initial concept for a lithium-ion battery,” says Chamberlain. “This was back when big companies had massive industrial research labs.”

But it was Sony that first commercialized the technology during the 1980s. And by the early ’90s, Chamberlain says, the U.S. Department of Energy realized the potential for lithium-ion batteries to power electric vehicles. That’s when USDOE started funding research in labs, including Argonne.

“By 1999, Argonne had filed some patents that have since been licensed to companies like General Motors, LG Chem, BASF, and others,” says Chamberlain

And as prices come down, Chamberlain expects the field to expand rapidly.

“In the next ten years, the battery business, both for vehicles and the grid, is going to be worth somewhere between $40 billion and $140 billion dollars a year, according to some projections,” he says.

‘The best way for battery companies to thrive is to develop the products in concert with utilities.’

But getting battery companies to work with utilities for grid storage applications has been a slow process, says Chamberlain.

“The best way for battery companies to thrive is to develop the products in concert with utilities,” he says. “I see battery companies who develop products, but they don’t necessarily have utilities in partnership, like Tesla combining with SolarCity to disrupt the current operation of the grid.

“There’s a fundamental problem with that. The utilities are partly regulated, we all as consumers share the cost of utilities. When they build new transmission lines, let’s say, they build it with a 30-year loan. The disruption that occurs with people getting off the grid means somebody has to pay that 30-year loan. And for those who can’t afford the solar and battery, their costs go up.”

Chamberlain says he is just starting to see utilities become more open to the idea that battery storage is important.

“Three years ago, utility operators in the U.S. were fighting this idea,” he says. “Now, they’re actively considering it. But they’re not there yet; they haven’t started doing it.”

And it won’t be until utilities feel under threat from the likes of Tesla and SolarCity, says Chamberlain, that he expects to see real change.

“The only thing that would push them is if they feel their business model threatened,” he says. “If I’m a utility, I’d think, ‘Hey, if the technology is cheap enough to do that, why don’t we own it?’ That’s what should push them.”

Chamberlain believes active participation of utilities in battery research is critically needed for the technology to advance.

“Utilities need to know what technology will work on the grid,” says Chamberlain. “Ford, GM, they’re battery experts. The utilities are not. They can go to places like Michigan or Argonne and say, ‘Hey, help us work through this. Help us figure it out.'”

But other utilities’ forays into battery storage have been limited to small-scale, grant-funded pilot projects.

Hawk Asgeirsson is a manager of power systems technologies for DTE Energy, one of Michigan’s largest electric utilities. He says that although DTE Energy is not directly involved with the battery lab, the utility does contribute to the Energy Institute.

DTE has also undertaken a grid storage demonstration project in Monroe Township, Michigan. The five-year project launched in 2010, combining solar arrays with lithium-ion batteries. It was funded through a 50 percent cost-share program through the U.S. Department of Energy.

“We have a number of small battery systems located close to the customer,” says Asgeirsson. “We have seventeen of those on one circuit, and then on the same circuit we have a larger battery combined with a large solar installation.”

Asgeirsson says the auto industry’s development of lithium-ion batteries in Michigan made the project attractive and timely for DTE Energy.

“At that time, battery prices were fairly high, but with the introduction of plug-in electric vehicles with lithium batteries being built right in the state of Michigan, we thought it was a very good time to try the lithium battery on the grid,” he says.

The pilot faced several challenges along the way, including the bankruptcy of its battery supplier and software glitches.

“It’s still an early-stage industry,” says Asgeirsson. “There are still challenges with storage on the grid. We haven’t had the time to do enough demonstration projects as an industry to learn.”

Although the grant is expiring this year, Asgeirsson expects to keep operating the system. However, he says DTE has no current plans to expand the pilot or initiate new projects.

‘Five years ago is ancient in the storage industry.’

According to Jesse Morris, manager with the Rocky Mountain Institute, the landscape for grid battery storage has greatly improved in the five years since DTE first launched its project.

“Five years ago is ancient in the storage industry,” he says. “There’s been some narrowing of the vendors that deliver products that last a while and have warranty behind them.”

In a new RMI report on The Economics of Energy Battery Storage, RMI demonstrates how grid battery storage can deliver “stacked services” (for example, frequency regulation, resource adequacy and capital cost reduction) to improve its cost efficiency profile. RMI advises utilities to implement technology and business structures to leverage these cost-efficiencies. But the report notes that regulatory change is also needed.

“We scream this over and over in the report, the need to have regulatory change so that utilities are required to look at storage in a different way,” says RMI senior associate Garret Fitzgerald, one of the study’s co-authors. “Right now utilities make money by installing large centralized assets, which then they can earn a regular rate of return on. Until there are some regulatory changes that force their hand to use potentially cheaper solutions, they’re not going to be incentivized to do it.”

Ted Miller is senior manager of battery research at Ford Motor Company. He says that although the battery lab has no utilities directly involved currently, the company communicates extensively with utilities on vehicle electrification. He expects that communication to develop further toward grid applications as the technology develops and prices decrease.

For example, he is interested in exploring how auto batteries can potentially be re-used for grid applications, especially behind the meter.

“I think that the utilities will definitely be interested in this to some extent,” says Miller. “[The batteries] still have a capability that’s relevant to another application even at the end of vehicle life.”

And Barteau sees a variety of potential users and industries for of the battery facility.

“Some of the companies will be aimed at transportation,” he says. “Some will be aimed at grids. I think the [battery] facility is potentially applicable to both. The initial interest we’re seeing is more from the transportation side, but if we’re successful there, I’m sure that we can pursue any number of directions.”