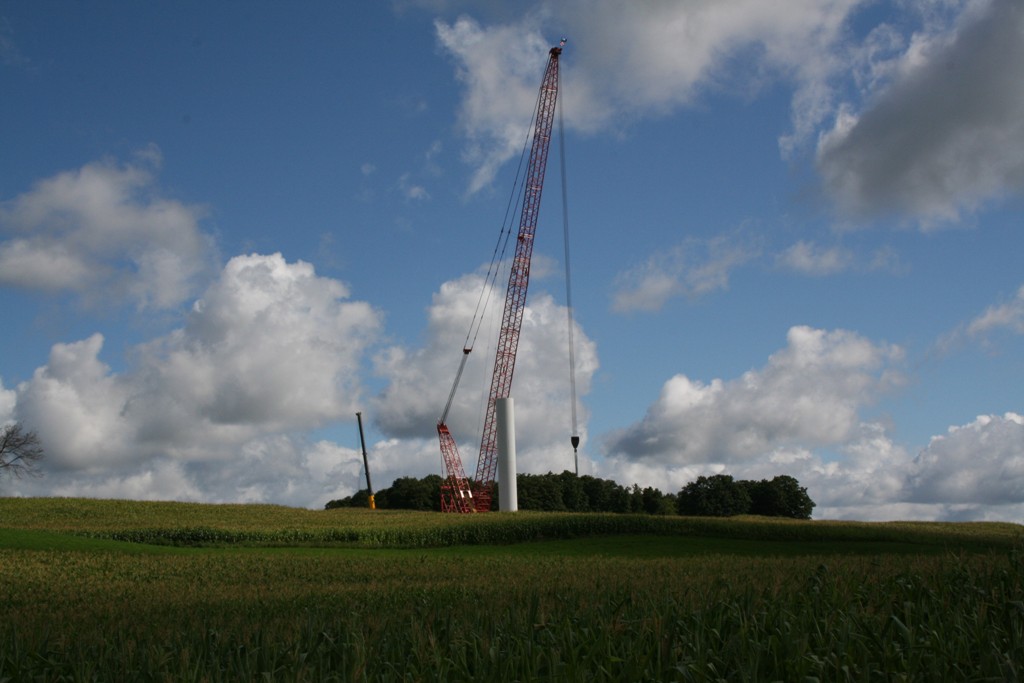 A wind turbine under construction in Michigan in 2008.

Michigan’s Renewable Portfolio Standard has played a critical role in the development of more than 1,500 megawatts of wind capacity in the state since 2008.

But according to the Michigan Public Service Commission, the amount of new wind contracts may have peaked by 2014 due in part to the standard leveling off at 10 percent by the end of this year, a target utilities are on track to hit.

The trajectory of future wind development from here is anyone’s guess. With a Republican-dominated legislature and executive office, politically it’s almost a foregone conclusion that a majority of lawmakers won’t mandate additional renewable generation.

While major utilities and leading Republican lawmakers say additional renewables will come as a result of integrated resource planning, complying with the federal Clean Power Plan and declining costs, clean-energy advocates say none of those provide certainty the way standards do.

Advocates point to nuances they say stack the deck against opting for renewables and in favor of natural gas.

On-shore wind is the primary resource utilities have used to meet the 10 percent standard.

Pruss said Michigan is already a “difficult environment” for wind companies that “have to aggregate lots of small parcels of property, lease them all out and observe the setback requirements they don’t have to do in the Great Plains.”

In turn, utilities have to “administer and manage a ton of contracts with land holders,” contributing to the disincentive to go with wind here, he said.

An added pressure, Pruss noted, is a utility-backed media campaign warning about a capacity shortfall and reliability issues in the state, which suggests utilities building new base-load natural gas plants will be the solution.

Backers of that campaign led by Citizens for Michigan’s Energy Future say they promote an “all-of-the-above” approach that supports both renewables and natural gas.

A DTE Energy official says the utility will pursue more renewables “regardless of whether a new state mandate exists.”

“The previous mandate was helpful in getting renewable energy started in Michigan, but costs have come down and federal regulations are now in place that would make a new state mandate redundant and perhaps even more costly for customers,” said David Harwood, DTE’s director of renewable energy.

He added that more renewables will be required in the state’s portfolio as leaders develop a State Carbon Implementation Plan to comply with the federal Clean Power Plan. However, the extent of that is unclear.

“Until the state implementation plan is finalized, it is impossible for us to commit to specific future projects or timing,” Harwood said.

Michigan’s implementation plan will likely comprise a mix of new natural gas plants, energy efficiency and renewables, based on goals laid out earlier this year by Gov. Rick Snyder.

State lawmakers are simultaneously crafting a new comprehensive energy policy they hope to complete by the end of the year that could influence Michigan’s Clean Power Plan strategy.

In turning away from a more robust renewable standard, Republican lawmakers are pushing for a detailed integrated resource planning process that may be based on incentivizing utilities to make clean energy and efficiency investments. Supporters of the IRP approach also say renewables are close to competing with coal and gas on price.

“The economics certainly is a driver, but in and of itself (would not be sufficient),” Pruss countered. “The utility culture, the complexity of building wind farms and the number of contracts — these are all things that are weighing against building wind absent a mandate.”

Pruss also noted Michigan’s 10 percent cap on electric choice, which limits customers who can participate to 10 percent of a utility’s capacity, is hampering outside investment in renewables.

Major utilities are lobbying lawmakers to eliminate the electric choice entirely, while the main legislation being discussed in Lansing would keep it at 10 percent with tightened restrictions. Other proposals have surfaced but have not gained much traction to deregulate Michigan’s energy system entirely.

Pruss said the choice cap limits the amount of independent developers who could come in and build new renewable projects.

“My sense is there will be fewer projects,” Pruss said.

James Clift, policy director for the Michigan Environmental Council, said it would be beneficial for utilities to make “incremental investments” in renewables as a “low-risk way to proceed.”

“The thing about renewables is you’re buying in fairly small buckets with fairly limited exposure,” he said. “If you get it wrong and it’s a nuclear plant, that mistake costs you billions of dollars. You can’t make those mistakes on the renewables side.”

Clift said he does “worry we are seeing a little slowdown as the standard winds down” and that increasing the standard “is the smart way to go” and sees room for growth.

“Everything we’re seeing now as the price continues to go down, we should continue to take advantage of it,” he said. “The best way to find out (if utilities will invest in renewables) is to put out bids for renewable power. If all of a sudden those bids start to go up, maybe someone can make the point” against renewables.

The Michigan Public Service Commission has reported over the past two years that, as utilities have steadily increased renewable production to meet the state standard by 2015, the number of new contracts approved by the commission have started to fall off.

The MPSC does note, however, that more than 1,200 megawatts of wind power are in grid-operator MISO’s “queue” that represent near-term potential in the “definitive planning phase.”

While that figure “surprised” Pruss as being more than he anticipated, the MPSC report notes: “Although the Queue continues to show additional wind development in Michigan, it is likely that, based on the current renewable energy standard, development has peaked.”

Julie Baldwin, renewable energy section manager for the MPSC, said because utilities have met their 10 percent obligation under the renewable standard: “I don’t expect utilities to be issuing requests for proposals for more renewables. I suppose if they receive an unsolicited bid that will be extremely beneficial for ratepayers then the utilities could bring us a contract. But I wouldn’t expect significantly more development because the RPS is full.”

Several projects in the Thumb region of the state — where the highest density of wind development has happened — are scheduled to be operational in 2016, including the 100 MW Apple Blossom and 150 MW Deerfield Wind projects.

Baldwin believes turning to an IRP process “will result in some new renewables, but I don’t know enough about how it will all work to know if it’s enough to keep Michigan going at 1 percent new generation per year.

“That was a pretty amazing growth rate in renewables,” she added, referring to the impact of the 2008 law. “We’ve certainly showed that our state can do it and renewables have value and are not as expensive as everyone thought they’d be pre-2008.”