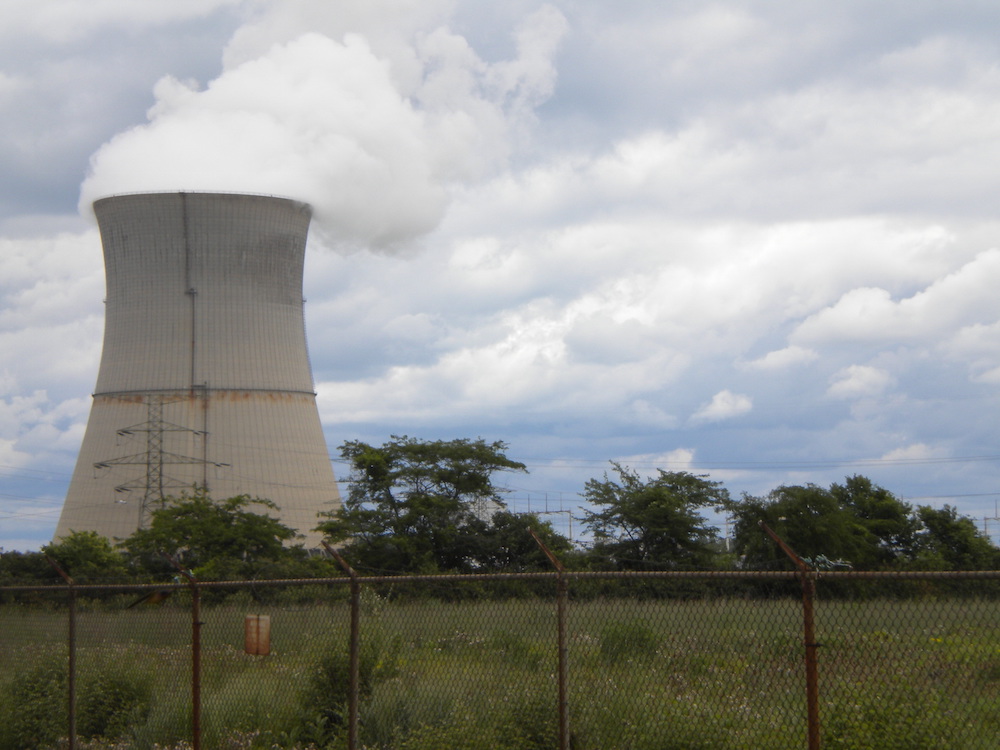 The cooling tower at the Davis-Besse nuclear plant in Ohio.

An Ohio utility and state regulators are still at odds, sources say, over a controversial rate case critics have labeled a “bailout” for a utility trying to guarantee sales for several nuclear and coal plants.

Although FirstEnergy is in active discussions with Ohio regulators about its case, sources say the sides are still far apart and the case is unlikely to be resolved this year.

The submission of evidence in that case wrapped up in late October after approximately two months.

“I think we have the opportunity to settle the case all the way through any final outcome, actually,” FirstEnergy President and CEO Chuck Jones said during the company’s third quarter earnings call on Oct. 30. This is generally true about any litigation, but the rate case involves several complications.

While the tone of the earnings call was upbeat, it’s unclear whether an agreement can be reached between FirstEnergy and staff at the Public Utilities Commission of Ohio. Even if that happens, other parties could object.

Most importantly, any settlement would need to satisfy Ohio law and get approval from PUCO commissioners.

Various environmental advocates, business customers, competing energy companies and consumer advocates have opposed FirstEnergy’s plan since it was filed in August 2014. In their view, the proposed 15-year deal would violate Ohio law and cost ratepayers far more than they might save.

Several events have also occurred since FirstEnergy filed its plan last year, which challengers say make it even less attractive for Ohio consumers.

In particular, the Clean Power Plan has been finalized, a similar plan in West Virginia is costing consumers more, wholesale prices have not risen as FirstEnergy’s expert claimed, and comments by one Ohio lawmaker and others arguably undercut claims that the plan is needed to ensure a reliable electric supply.

A ‘mandate to increase customers’ bills’

FirstEnergy’s plan calls for its regulated utilities in Ohio to enter into a 15-year contract to buy the entire electricity output for certain plants from its unregulated generation affiliate FirstEnergy Solutions. The utilities would then resell the electricity on the competitive market.

The affected plants are the Davis-Besse nuclear station in Oak Harbor and the W.H. Sammis plant in Stratton, plus FirstEnergy’s interest in power from two 1950s-era coal plants owned by the Ohio Valley Electric Corporation. The Sammis plant has been operating for more than 50 years, and the 40-year license for the Davis-Besse plant is set to expire in 2017.

Under a 1999 law, the distribution of electricity in Ohio is regulated, while generation is supposed to be an unregulated, competitive market in which customers are free to choose whom they will pay as their supplier.

Under FirstEnergy’s plan, all distribution customers would either be charged or get a credit for the difference between that resale price and the contract price.

Critics say the FirstEnergy plan runs counter to state law and would prop up failing power plants. They call the plan a “bailout” and say the power company would not be asking for it if those plants could otherwise compete effectively in the market.

“Bailing out these uneconomic coal plants would amount to nothing more than a mandate to increase customers’ bills,” said Dan Sawmiller of the Sierra Club.

Earlier this year, the PUCO ruled that similar plans by American Electric Power and Duke Energy could be approved if they were in customers’ best economic interest, but it rejected the utility’s initial plans.

FirstEnergy’s case hinges on the company’s argument that locking in a higher-than-market-rate price now will pay off in the long run. The company’s analysts predict that the wholesale price for electricity will rise significantly in future years.

During the evidentiary hearing, PUCO staff member Hisham Choueiki urged the commission to deny the plan “as it is currently proposed.” However, he added, a plan “if properly conceived, may be in the public interest.”

“With regard to the Staff’s testimony, we agree with the Staff that a properly constructed Purchased Power Agreement can benefit customers, and we’ll continue to work with them and other parties to ensure our plan addresses their concerns,” FirstEnergy spokesperson Doug Colafella said.

Reliability for the future?

The “biggest flaw” in FirstEnergy’s arguments is that the company’s market projections appear to be “wildly inaccurate” based on what future prices are showing, said Cathy Kunkel of Kunkel Energy Research, who consults for the Institute for Energy Economics and Financial Analysis.

In a report released by IEEFA last month, Kunkel noted that ratepayers are indeed paying more under a similar plan by FirstEnergy in West Virginia and showed how the Ohio proposal would shift the risk for any future losses away from shareholders to ratepayers.

“Regarding the IEEFA report, we need to recognize that competitive markets like Ohio are not really designed to address concerns about reliability and price volatility over the long term,” Colafella responded. “They are solely designed to pick the lowest-cost resources in the near term.”

The current competitive market “cannot preserve a set of resources (base load coal and nuclear plants) that may cost more today, but may be more valuable over the long-term as an insurance policy for customers,” Colafella continued. The “primary driver” behind the company’s proposal is “keeping vital base-load plants available as a ‘bridge’ as we make the transition over time to a more gas-dominated supply scenario,” he added.

Ironically, Sawmiller noted, September’s report from Ohio’s Energy Mandates Study Committee argued that reliability is not a worry for the state. That same argument also “undermine[s] the utilities’ arguments for the bailouts with regard to reliability,” he said.

That committee report “completely ignores the economic and environmental benefits that energy efficiency and renewable energy have brought to Ohio,” Sawmiller noted in a response released last month. “However, even this biased report finds that a bailout of uneconomic generation in Ohio is an unnecessary and futile exercise.”

FirstEnergy’s claims about price volatility have also been subject to attack.

Cross-examination during the PUCO hearing challenged FirstEnergy witness Judah Rose on his forecasts about price volatility and led to an admission that wholesale power prices have not risen the way the company claimed they would.

Rose also failed to account for increases in energy efficiency that would lower demand and the price for electricity.

Additionally, Rose discounted chances that the Clean Power Plan would survive a legal challenge. This summer, the U.S. Environmental Protection Agency finalized regulations to curb power plant emissions of carbon dioxide, which is a greenhouse gas that contributes to climate change.

Renewable energy and energy efficiency are generally viewed as among the least-cost options for complying with the plan and their growth would likely further decrease demand for coal-powered electricity.

Although Ohio is part of a group of states that oppose the Clean Power Plan, New York and various other states are siding with the EPA in pending litigation.

Before issuing those rules, the EPA determined that the costs for complying with the plan are dwarfed by its benefits, including better health, increased resiliency and reliable, affordable power.

“A subsidy like this would have none of the societal and economic benefits that would come from increased investments in energy efficiency and renewable energy in Ohio,” Sawmiller said.