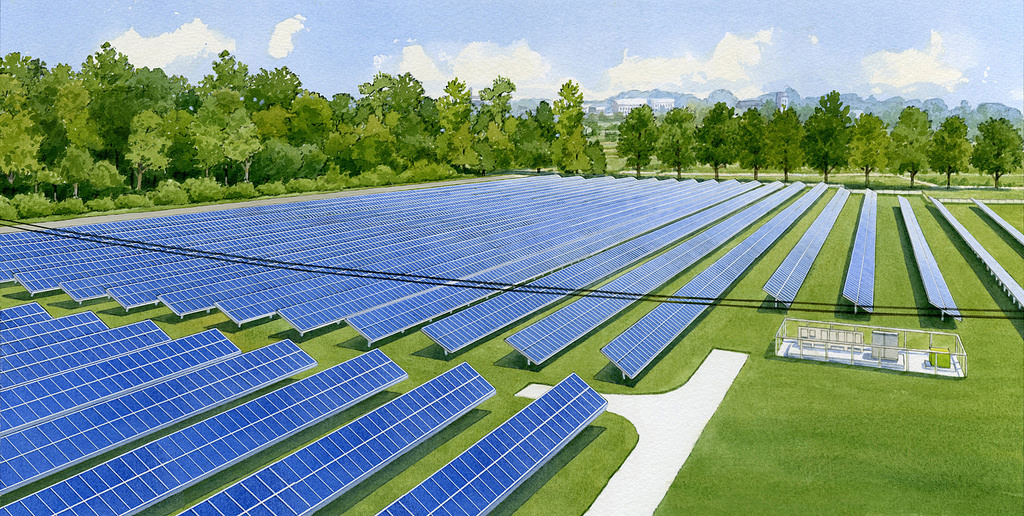 Utilities big and small across Michigan are catching on to the popularity and increasing demand from their customers for access to solar energy.

Over the past year, at least three utilities and a separate third-party company have announced community solar programs, and more are expected to come.

While perhaps not as robust of an industry as it is in states like Minnesota, clean-energy advocates describe a situation in Michigan where community solar may be seeing the end of its growing pains, allowing utilities and local units of government to build on the experiences of early adopters.

The next year should give utilities an even better sense of the level of community interest in participating.

“It’s my hope that as people have figured out how to make these solar projects work that we continue to repeat the projects on a shorter timeframe to get off the ground,” said John Kinch, executive director of Michigan Energy Options. “We have a lot of folks trying to solve this puzzle.”

That puzzle, Kinch said, involves the challenges in launching community solar from the ground up, such as designing price structures, interconnection and working around local zoning ordinances.

“It’s a number of very engaged, motivated people trying to solve this,” he said, describing Michigan’s growth over the past year. “But it has showed good progress in that period of time. From my experience, we’ve had a couple of hard years to get to this point.”

MEO, which has offices in mid-Michigan and the Upper Peninsula, is a nonprofit organization that works with local governments and businesses to promote renewables and energy efficiency.

The organization is partnering with local governments, the Lansing Board of Water and Light and others on a community solar project announced last month. The plan is to have two 300-kilowatt installations in different locations in the capital region. Residential and business customers will be asked to participate, he said.

“I think we’re making really good progress,” said John Sarver of the Great Lakes Renewable Energy Association. “These things take a while. I’m not disappointed with where we are now overall in the sense that we’re just laying out programs. Basically, we’re generating more solar choices for folks, which is all for the good.”

Lansing’s is one of four community solar programs announced over the past year that will be under construction in the coming months. Since May 2014, only two community solar projects have been in operation, though one of them at a cooperative in mid-Michigan plans to double in size next year.

Consumers Energy, one of the two largest investor-owned utilities in the state, announced a program in August looking to bring 4 megawatts of community solar online, with the potential for 10 megawatts.

Consumers will partner with Western Michigan University and Grand Valley State University, where the separate installations will be located. Construction is expected to start this winter.

DTE Energy, the other large investor-owned utility here, says it is still developing its own community solar program.

In the Upper Peninsula, the Marquette Board of Light and Power has announced plans for a 50 to 100 kilowatt program “with ample room for growth,” the utility says.

‘Until you get the price structure out there, it’s difficult to gauge interest.’

The installation would be launched in summer 2016 if there is enough customer interest, said David Lynch, Marquette BLP’s assistant director of utility operations. The utility is still working out prices.

“We’ve had a lot of excitement about it in town,” Lynch said. “A lot of people really like the idea, but until you get the price structure out there, it’s difficult to gauge interest. This will be our first foray into community solar.”

Lynch said interest from the utility started based on other public power providers’ experience across the country. Community solar — and other renewables — will likely play a role as the utility begins to reshape its generation portfolio, he added.

In January, Wisconsin-based Community Green Energy announced it was partnering with a local township to build a 100-kilowatt array at a historic mansion in West Michigan. The Laketown Community Solar Garden at Felt Mansion is expected to start construction next month.

It claims to be the first “virtual community solar garden” in Michigan by distributing net revenues paid by the township for the electricity produced as cash payments to subscribers, who don’t have to live in the township. Electricity generated will be delivered to the local grid and sold directly to Consumers Energy as part of its Experimental Advanced Renewable Energy Program.

Community solar continues to grow in Michigan despite the lack of a uniform statewide policy.

For the second year in a row, a bipartisan group of lawmakers have introduced legislation that would directly regulate community solar.

HB 4878, part of a broader “energy freedom” package that was also introduced last year, would allow various entities to buy a share in a renewable energy “garden” and receive a monthly bill credit for their shares’ output. Investor-owned utilities would enter into an agreement to purchase the garden’s energy production as well, according to the bill sponsored by Rep. Gary Glenn, a conservative Republican.

“Everyone should have the opportunity to invest in renewable energy, even if they can’t install a system at their own home or business,” Rep. Glenn said in September. “The community energy bill would enable a wide range of people to share the up-front costs and long-term benefits of producing renewable energy, keeping more of our energy dollars here in Michigan. It’s pro-jobs, pro-environment and pro-freedom.”

The bill is awaiting action in the House Energy Policy Committee.

Additionally, advocates criticized the utility’s valuing of solar as part of the program that they say undervalues customers’ investments.

Sarver added that compared to Minnesota, which has taken on issues like determining a value of solar, Michigan is still lagging.

“(Minnesota) has really gone at (solar) in a big way. There’s policy to support it,” he said. “In Michigan, what’s happening is really due to customer interest that’s driving it. From utilities, it seems like, ‘Oh, geez, it seems like people want to do this, let’s go ahead and do it.’”

According to Kinch, though, Michigan’s progress may have to happen on its own path rather than following other states.

“It would be nice to think one size fits all, but I don’t see that happening yet across the country,” he said.

For utilities and their customers, community-designed systems may be the least controversial approach to growing solar in Michigan.

The major utilities here say that utility-scale projects are the most cost effective for all ratepayers and have lobbied in support of net-metering law changes that critics say would stifle rooftop solar and self-generation.

Competing bills in the House and Senate take vastly different approaches in the way they approach net metering and apply a value to solar. It’s unclear what sort of compromise may be worked out, if there is one, before the end of session in December.

But for now, clean-energy supporters and organizations continue building on the early growth of a system that allows ratepayers to participate who might not install their own panels.

“Community solar fits a kind of niche for a business owner or a homeowner that, for whatever reason, can’t have solar on their property,” Kinch said.

“We want to see all of the above and more of it,” he added, referring to the debate surrounding rooftop solar and utility-scale projects. “We shouldn’t divide and conquer ourselves, we should be thinking about ways to mobilize.”