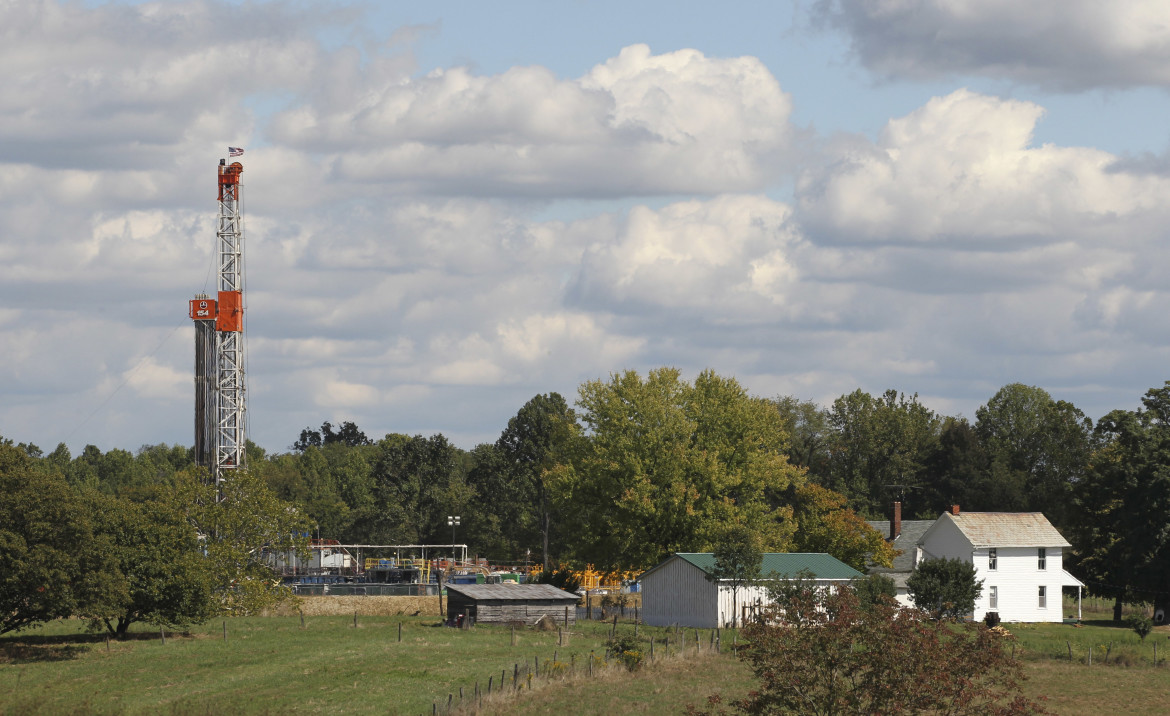 A drilling rig rises across the road from a farmhouse in Carrollton, Ohio.

Ohio lawmakers are not ready to raise the state’s severance tax on hydraulic fracturing, according to conclusions from a recent report on taxing oil and gas drilling in the Buckeye State.

The findings, however, won’t stop a grassroots effort pushing a rate hike that would put Ohio on par with other fracking regions.

The 56-page study, released Oct. 22 by a legislative task force examining the state’s tax on fossil fuel drillers, failed to recommend any form of fracking tax increase, instead suggesting a slow phase-in of changes dependent on the strength of the market. Though billions of dollars in oil and gas have been extracted through horizontal drilling since Ohio’s boom began in 2011, the report pointed to an industry “under financial stress” overall.

“Ohio should not expect to see a new revenue stream materialize overnight until market conditions improve,” stated the study, a result of months of talks among an informal group of bipartisan legislators along with representatives from three major fuel-producing associations. With prices for crude oil and natural gas at their lowest levels in decades, any future rate increase would have to be preceded by certain industry benchmarks, or “triggers,” which the taskforce did not elaborate upon.

Ohio Gov. John Kasich, who has previously proposed severance tax increases up to 6.5 percent, called the report’s conclusion “disappointing,” considering the state’s current rate on drilling remains among the lowest in the nation.

Kasich’s sentiment is echoed by research group Policy Matters Ohio, which along with six energy, environmental and public health organizations is calling for a 5 percent tax on fracking. The groups believe 5 percent is a reasonable proposal for oil and gas companies to pay their portion of costs associated with Ohio’s shale boom.

Despite an industry-wide downturn, both production and pipeline capacity have burgeoned locally, Patton said. Ohio’s oil volume in 2015 grew by 3.1 million barrels from a year ago and natural gas jumped by 133 billion cubic feet over that same time period, according to a findings from the Ohio Department of Natural Resources.

This uptick in productivity indicates long-term interest in the Utica shale formation in eastern Ohio, said Patton. The state has an opportunity to reach external markets with higher prices as well as build an ethylene processing and plastics venture around the prosperous Utica shale play.

“Oil and gas is young here, but it still has powerful sway,” she said.

Progress has come with expanded costs for Ohio’s drilling-heavy communities, said Jack Shaner, deputy director of the Ohio Environmental Council, one of the local organizations pushing for a fracking rate increase.

“Fracking is a much more efficient method to produce oil and gas, which means the impacts are multiplied, too,” said Shaner. “A new severance tax is a logical way to ensure that whatever mineral is being pulled from the ground, the individual companies involved will pay their fair share.”

Under present provisions, Ohio charges 20 cents per barrel of oil, while the tax on natural gas is three cents per thousand cubic feet. These numbers are bolstered by a state conservation fee.

Beginning in 2012, several proposals have been unveiled to reform rates and revenue distribution of the oil and gas severance tax. House Bill 375, now languishing in the Ohio Senate after passing through the Ohio House in May 2014, would levy a 2.5 percent tax on fuels procured from drilling.

Not only is this rate too low, say supporters of the theoretical 5 percent tax, the House proposal would also subsidize the oil and gas industry through tax breaks, an outdated policy deriving from a time when fracking was a new technology.

Ohio groups backing a tax hike are asking for the limited usage or outright elimination of tax exclusions or holidays. When subsidies are offered, they should incentivize specific actions, like the hiring of Ohio workers instead of out-of-state crews.

“There’s a number of needs to address here and they all take money,” said Patton.

Policy Matters estimated a 5 percent severance on oil and gas would have netted $98.9 million in income on shale production in 2014. This figure compares to the $3.9 million collected last year for those same fuels through the existing half-percent tax, according to the Ohio Department of Taxation’s 2014 annual report.

Shawn Bennett, executive vice president of the Ohio Oil and Gas Association, said the taskforce study reflects the difficulty of enacting any new taxes or regulations during a lean time for oil and gas companies.

“We’re not talking about handouts or subsides,” said Bennett. “The basic concern is we’re bleeding right now, and have to be mindful of the delicate nature of the industry. A higher tax would take opportunities from landowners, investment from companies and jobs away from Ohioans.”

Backers of an increased severance tax, however, believe the state will continue to lose out on profit should the current rate remain.

“The industry is going to have to compensate the people of this state for valuable resources that can only be harvested once,” said Patton.

A tax more like that of other states will not stop development as long as supply is available, said Shaner of the Ohio Environmental Council. In 2010, West Virginia, with a rate of 5 percent on oil and gas, led the country in the number of new gas wells drilled.

A 5 percent tax would place Ohio in the middle of the pack compared to other fuel-generating regions of the U.S. If anything, it’s past time to establish a tax that can defray fracking costs while creating a robust economic future for the day Ohio’s oil and gas resources finally run out, Shaner said.

“There’s an industry bogeyman saying ‘We’ll leave if taxes are raised,'” he said. “But the industry has already invested billions, and they’re not going to walk away considering how far Ohio is below the (tax) bar. We just want taxes that are fair and adequate.”