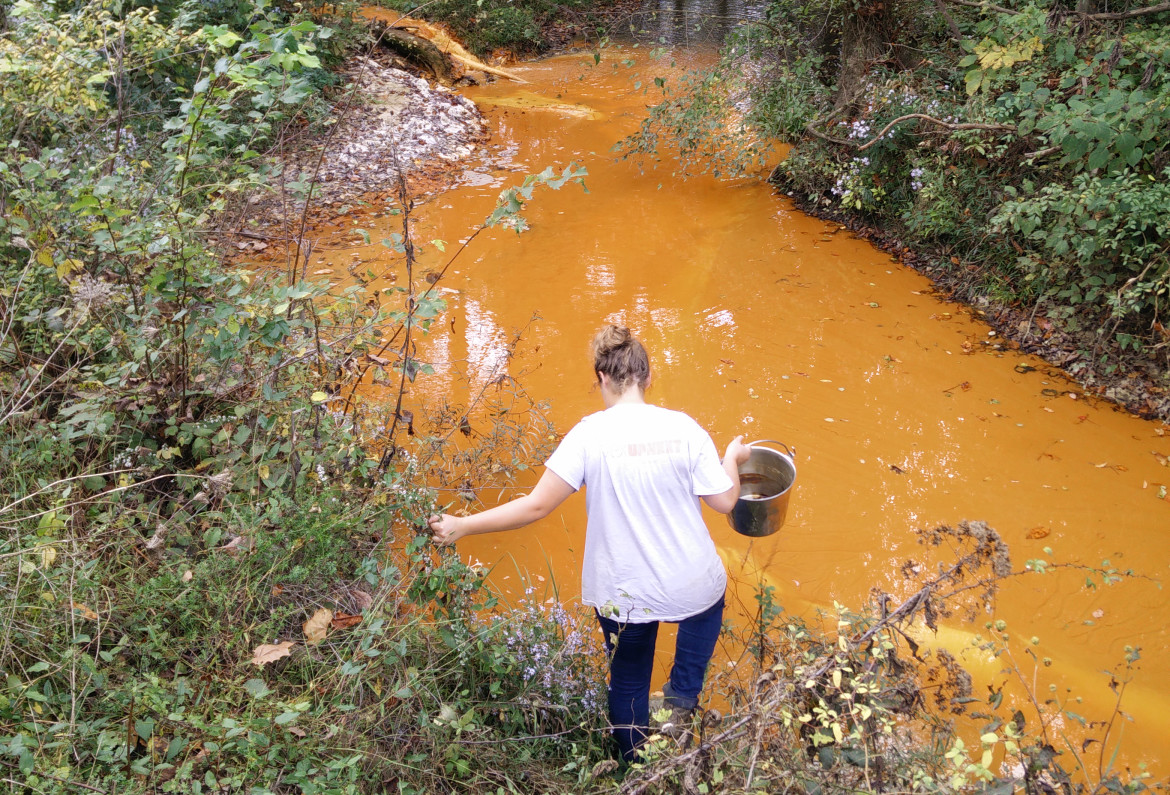 Hewett Fork near Carbondale, Ohio, suffers from a legacy of acid mine drainage from coal operations.

Efforts to improve water quality in an Ohio stream polluted by drainage from coal mines may be having unintended consequences, according to new research.

More than a decade after in-stream remediation began for the Hewett Fork in southeastern Ohio, the amount and diversity of life remains depressed downstream from old coal mining operations. Part of the problem appears to be low levels of nutrients needed for healthy biological diversity.

Research presented last week at the Geological Society of America’s annual meeting in Baltimore, Maryland, suggests that those low nutrient levels could be linked not only to acid mine drainage, but also efforts to correct it.

Understanding the problems in Hewett Fork and similar creeks is important, “so we can be good stewards of the environment and try to clean up some of the problems” that stem from past mining practices, reported Sarah Maj at Ohio University in Athens.

Acid mine drainage results from the oxidation of sulfides from coal mines. The pollution lowers the pH of waterways – making the water acidic – to levels that harm many organisms.

The acidic pollution also interacts with metals in streams, raising levels of various heavy metals. Chemical reactions can also cause conditions such as “yellow boy” — orange water indicating high levels of iron hydroxide. The phenomenon made news earlier this year after polluted mine water accidentally spilled into a Colorado river during EPA cleanup operations.

Acid mine drainage is “mainly a legacy problem” linked to the pre-1970 era when developers improperly abandoned many surface or underground mines, explained Maj.

Yet while those mines may be long-closed, acid mine drainage can seep from sites “for centuries,” she added. Thus, pollution from many old coal mining sites continues.

Maj’s research focused on Hewett Fork in the Raccoon Creek watershed near Carbondale, Ohio. Coal mining operations began in that area in the late nineteenth century.

In 2004, construction was completed on an in-stream doser at Carbondale to improve water quality in Hewett Fork.

Maj worked with geologist Dina López and other researchers at Ohio University to measure acidity, sulfates and nutrient levels at various sampling points upstream and downstream from the doser.

The doser adds calcium oxide to the water in Hewett Fork. The calcium oxide reacts with acid mine drainage pollution to raise the pH to higher levels downstream.

The process also causes dissolved heavy metals to precipitate, or fall out of solution from the stream water.

“You want the metals to precipitate out,” said Maj. When those chemicals are bound up in the sediments, they’re much less likely to poison organisms in the stream.

At the same time, however, phosphates and nitrates in the water can also fall out of solution or stick to metallic compounds that precipitate.

That’s not good, Maj said, because organisms need those nutrients. And if they’re bound up with stream sediments, organisms can’t use them.

The group’s preliminary findings show that both acidity and sulfate levels improve downstream after treatment by the doser.

In theory, nutrient levels should improve too, as more organisms can survive and break down organic material deposited in the stream.

However, nutrient levels are generally low along the stretch where sampling took place.

Preliminary data from August show drops in both nitrates and phosphates after water passes the doser. Nitrate levels improve somewhat as distance from the doser increases, but phosphate levels generally stay depressed.

The next step will be to analyze samples of stream sediments along the same flow path to see whether the nutrients are indeed becoming bound up there or if the problem might stem from something else. The results could be important for developing future strategies to restore areas impacted by acid mine drainage from coal mining operations.

And while acid mine drainage has been a known problem for decades, scientists have only recently begun considering its potential impacts on nutrient levels, especially in Ohio.

“Nutrients have never really been studied in this area in acid mine drainage streams, so this is just getting our feet wet and figuring out what this might mean to the stream,” said Maj.