Photo By
South East Side Coalition to Ban Petcoke 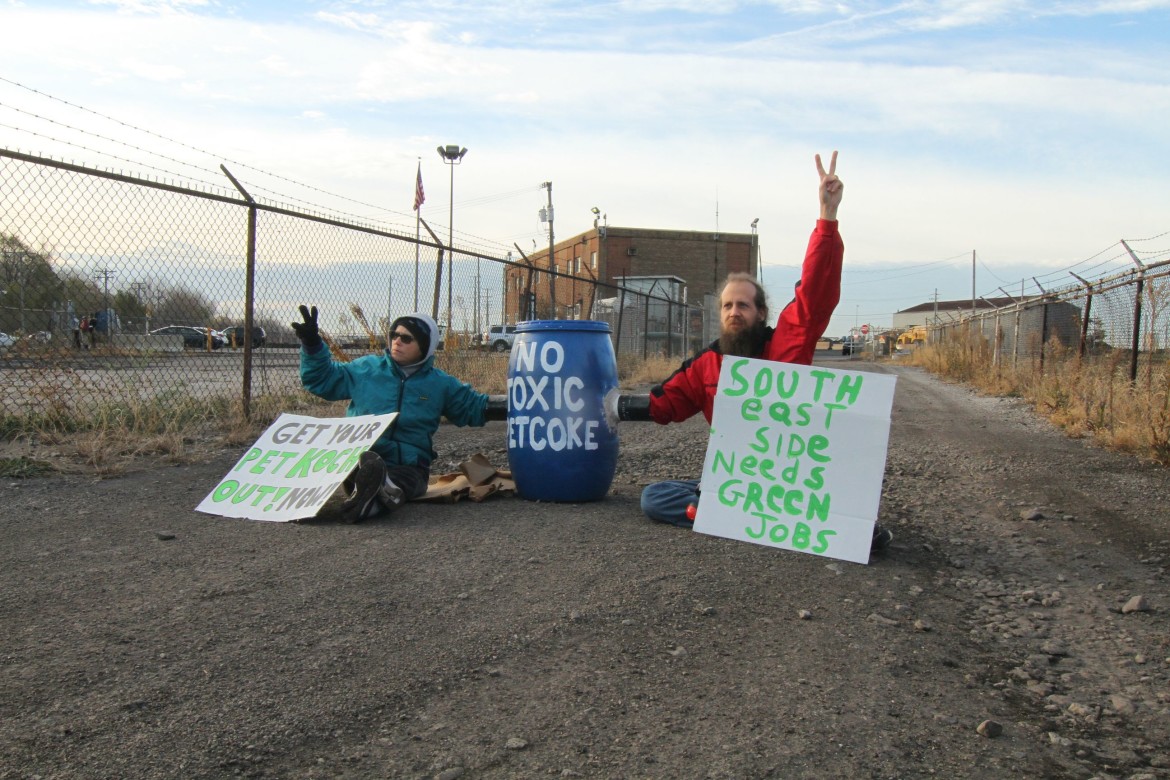 As police officers approached activists locked down blocking the KCBX Terminals petcoke storage facility on Chicago’s Southeast Side Monday morning, local protesters told Midwest Energy News they decided to risk arrest in their battle to ban petcoke because they are frustrated with city officials’ approach to the problem.

“We’re doing this for environmental justice,” said Rev. Jim Galuhn of East Side United Methodist Church, which is located near the petcoke storage. “We have a theology of creation, God created the world and we are stewards of that creation. We shouldn’t be poisoning our air and water that God gave us.”

Five protesters were arrested later in the day.

Alderman Sue Garza, elected to represent the 1oth ward in April elections where petcoke was a major issue, visited the protesters Monday morning and voiced her support.

“The problem is no one is listening, while our neighborhood is getting polluted,” Garza told Midwest Energy News. She said that she talked to police officers to make sure they knew about the protest. “Many of the officers live in our ward, they know what’s going on and they’re concerned too,” she said.

KCBX officials have said they are committed to complying with city rules that require the enclosure or removal of the petcoke piles by June 2016. But locals are concerned whether the company will really comply, given that the company had previously sought an exemption to the rules and said building an enclosure by then was impossible. And even if piles are enclosed, they are worried about dust from petcoke being shipped into the facility on barges, trucks and trains.

Garza said she is “very skeptical” about compliance with the rules. “They say they’re going to move the piles but the piles are getting bigger. It’s going to become a transfer site, but they’re still going to be traveling through our neighborhood.”

Seven protestors used lockboxes to secure themselves in front of the two entrances to the facility, which is a subsidiary of Koch Industries. Five people stretched across the main entrance with their hands secured in a chain of long black boxes of the type often used in civil disobedience. Two others blocked a side entrance with their hands locked inside a blue barrel painted with the words “No Toxic Petcoke.”

Local resident Kate Koval has long been concerned about the health and environmental effects of petcoke, and since her son Rudy was born seven months ago she has had extra motivation.

“Our raising awareness over the past two years has gotten two of the three sites shut down,” she said, referring to KCBX’s smaller site to the north and another former petcoke storage location owned by the company Beemsterboer.

But when residents complain about dust blowing from the currently operating KCBX site, city officials tell them to call the non-emergency 311 number to make a complaint, she said.

“That’s ridiculous, I’m sick of filing 311 complaints,” she said. “And now I’m constantly worried about my baby getting asthma or other respiratory problems. It frames it in a whole new way for me, being a mom.”

Garza said she is hopeful that the city will make stronger demands of KCBX. She said she has talked to Mayor Rahm Emanuel, other aldermen and the city’s health commissioner about the issue.

“I’d like to just see it leave, I’d like to see it go,” she said. “The mayor stood up and said he doesn’t want petcoke in our city either… I feel like we’re putting a lot of muscle behind this.”

In response to a request for comment, KCBX spokesman Jake Reint offered the same statement he had issued in response to a march by local activists on November 3.

It said in part: “KCBX has handled petroleum coke and other bulk materials in Chicago for more than 20 years. Throughout this history, we have always sought to operate our facility with the utmost respect for our neighbors and the environment, and that remains the case today. Nearly two years of air monitoring data show that air quality near the KCBX terminals is consistent with federal clean air standards.”

The protesters said trucks had not been able to enter the facility because of the blockade. Organizer Olga Bautista said that one truck driver “gunned it toward us with everyone in front of him, we freaked out. The security guard [from KCBX] came out and said, ‘No no no, back up’ [to the driver], and we started chanting ‘Shame on you’ to the truck driver.”