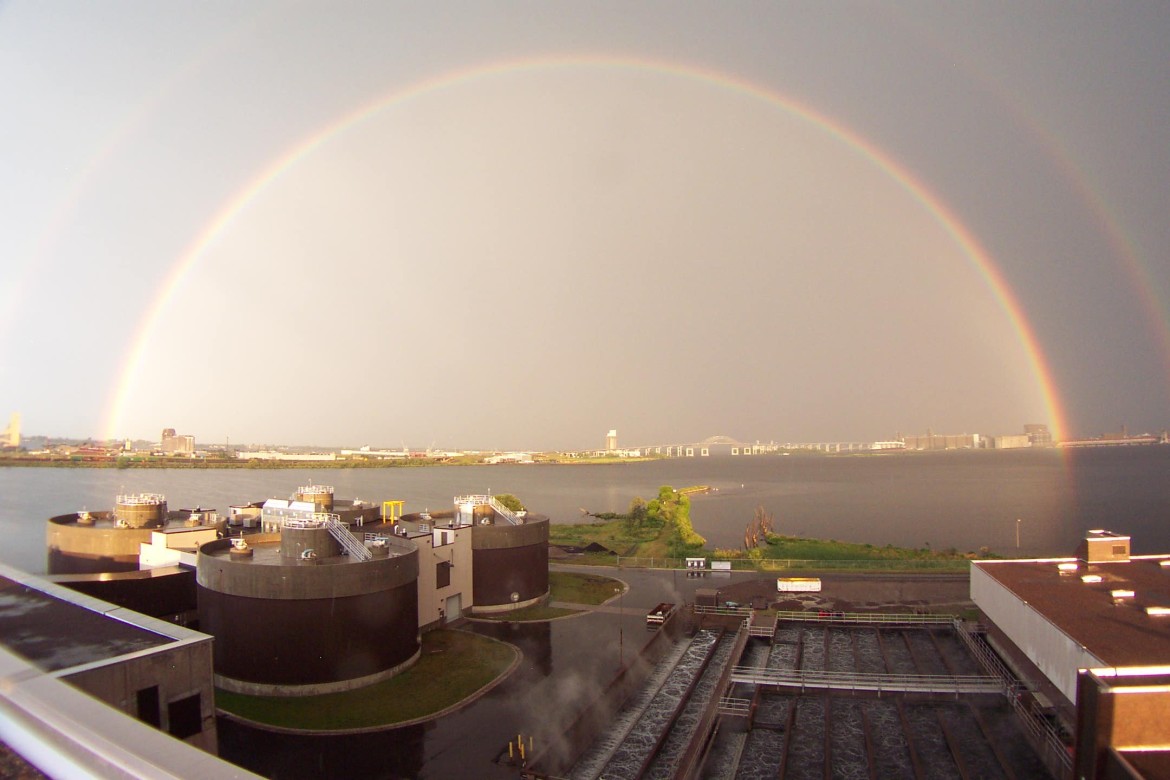 When Duluth’s downtown city streets are reconstructed over the next three years, the city’s local district energy provider wants to use the opportunity to totally transform its system.

Duluth Energy Systems is asking for $21 million from the Minnesota legislature to turn a decades-old coal-fired plant into an efficient, closed-loop system fueled by natural gas and biomass.

It’s just one of several proposals to make the city – a popular tourist destination for its proximity to nature and sweeping views of Lake Superior – into a greener, more sustainable community.

The local nonprofit Ecolibrium3 has been advocating for a community solar project, which Minnesota Power, the utility that serves the area, has proposed to the state Public Utilities Commission.

Adding to the list is a $30.4 million proposal for a host of improvements at Western Lake Superior Sanitary District that could produce enough energy from waste to power all its operations.

Ecolibrium3 is leading the city’s charge to reduce energy consumption by participating in the Georgetown University Energy Prize, a two-year competition involving 50 cities and a $5 million payoff.

‘The 2012 flood was a real motivation for us do something ourselves about climate change.’

Duluth Mayor Don Ness said part of the impetus for the effort came after the city’s devastating 2012 floods. The sense among community leaders was that Duluth needed to build resilient systems and to show leadership in reducing its own carbon footprint.

“The 2012 flood was a real motivation for us do something ourselves about climate change,” he said. “We were seeing the implications of climate change during that event and as a result we became interested in not adding to the problem but contributing to the solution.”

The efforts underway “are not small projects on the margins” but instead transformational in terms of creating cleaner energy for the city, Ness stated. “We are addressing energy issues on all fronts and it’s exciting to see synergies being created by our major partners.”

University of Minnesota Energy Transition Lab executive director Ellen Anderson said Duluth’s efforts reflect a desire by cities around the state and the nation to lead in confronting climate change.

Elsewhere in Minnesota, cities as small as Cologne and as large as Rochester have committed to goals of being near or at carbon neutrality in the future, she said.

“The projects will make the city more resilient and more efficient while promoting clean air and protecting their water resources,” Anderson said.

Duluth Energy Systems offers coal-fired steam heating to 175 buildings in the central business district and two hospitals, according to Jim Green, operations manager. Opened in 1932 as a privately owned entity, the district energy utility was taken over by the city in the 1970s. Today the system is managed by Ever-Green Energy, part of St. Paul’s District Energy, he said.

The current system “wastes a lot money” because of inherent inefficiencies, Green said. Water is taken from frigid Lake Superior and heated to 360 degrees to create steam that runs through aging pipes to downtown buildings before being dumped back into the lake. It only goes in one direction, unlike more common closed-loop district energy systems, so much water ends up wasted.

As does energy. “By the end of the process we only can use 45 percent of the energy created,” he said.

The new closed-loop hot water and cooling system would operate at a lower temperature, requiring less energy for heating and allowing for incorporation of solar thermal and waste heat capture technologies. It would reuse water rather than dump it back into the lake, he said, using only one percent of the volume deployed in the current district energy process.

‘This is a once-in-a-generation opportunity.’

“We see this as a stepping stone to making a big transformation of our energy system in Duluth and it gives us a chance to displace coal by using more sustainable fuels,” Green said.

“This is a once-in-a-generation opportunity,” said Slick. “The city is reconstructing Superior Street and First Street down to the utility level. It’s a complete rebuild and it happens to be a great window of opportunity.”

Adding biomass as an energy source could have a nice secondary impact, said Anderson. The Energy Transition Lab she leads is looking into how biomass could benefit the region’s forestry industry, which has suffered economically, she said.

One of the more intriguing aspects of a new system is the opportunity to capture waste heat from downtown sewer pipes, which could reduce the amount of energy that has to be burned to maintain the temperature of the steam, he said.

Ken Smith, CEO of District Energy, said combining energy projects with infrastructure and road construction makes economic sense, saving as much as 40 percent on project costs. These projects “are a great time to be thinking about what infrastructure we should be putting in for the next 50 to 100 years” he added.

The Western Lake Superior Sanitary District could be carbon neutral by 2020 if the organization receives $30.4 million in state bonding money to add a green infrastructure that will allow the facility to operate almost entirely on biofuel it creates from waste.

While many wastewater plants use anaerobic digestion at the end of the process to produce biogas and create byproducts such as fertilizer, none has ever produced enough to fuel their entire operation, said Marianne Bohren, executive director of the sanitary district.

In winter the plant collects biogas for heat but in summer that energy is flared off, she said. “Our largest non-payroll cost is purchased electricity, and it makes up 20 percent of total operating budget,” she said.

The sanitary district serves more than 140,000 residential customers and four major industrial concerns in a 530 square mile area. The treatment plant in Duluth handles 14 billion gallons of water annually, pushing the waste through four anaerobic digesters which produce enough methane to take care of about 8 percent of the plant’s heating needs.

The next step for the plant is to run the methane biogas into two 825 kilowatt generators to produce electricity. The digesters have excess capacity, allowing food wastes into the mix. With just the biogas being produced now the plant could provide 35 percent of its electrical needs, said Bohren.

“By adding additional materials into the digesters we’re hoping to get to meeting 50 to 100 percent of our electrical and heating needs,” she said. Any excess gas could be put to other uses, such as being compressed to fuel vehicles.

The plant is already preparing for a carbon neutral future. Using local money, the plant spent $11.2 million this year to replace its current boilers with nine modular units that allow for natural gas and biogas to power the hot water system.

Next year Bohren would like to have money for new ventilation equipment, heat exchangers and the two electric generators. The third phase adds new agricultural and food waste that would boost biogas production, she said.

‘We are an economy that has been based on natural resources.’

Another reason for the project is simple economics. The plant’s electricity rates have increased 66.4 percent since 2006, and there’s no reason to believe rate hikes will end, she said.

“We are an economy that has been based on natural resources,” she said. “As we move forward trying to embrace this idea of renewable energy and sustainability I think the project is advantageous for this area, from both an environmental standpoint, and economic standpoint.”

Duluth-based, ALLETE-owned Minnesota Power announced in September a plan to build a one megawatt community solar garden at an undetermined site in the northeast part of the state next year. The utility is bidding that project out to solar developers while agreeing to buy the energy produced.

A second, 40 kW project, which Minnesota Power will own and manage, is planned for Duluth. Solar is a tiny part of the utility’s overall energy mix, representing just .5 percent. Much of that power comes from the 150 solar producers on the company’s grid, according to Amy Rutledge, spokeswoman for Minnesota Power.

Unlike Xcel Energy, the state’s largest utility, Minnesota Power has no statutory obligation to provide a community solar program. However, like Xcel, it must meet a state mandated target of 1.5 percent of retail sales coming from solar by 2020 and plans to use the program as part of its effort, she said.

The utility’s initial announcement drew interest from large subscribers such as the University of Minnesota at Duluth and St. Louis County, she said. The utility will allow 50 percent of the solar garden to consist of large commercial subscribers while the rest is reserved for residential ratepayers. “We want as many customers as possible to participate,” Rutledge said.

The program differs from community gardens in Xcel’s territory in other ways. Any homeowner or business living in Minnesota Power’s footprint can join. Three levels of subscriptions are available: A one-time payment, a fixed monthly subscription and a fixed per kWh charge.

The Minnesota Solar Energy Industry Association, the Izaak Walton League of America‘s Duluth chapter, Fresh Energy (where Midwest Energy News is based) and others applauded the program while raising a few issues. They believe subscribers should be compensated for the renewable energy credits (RECs) they give up to Minnesota Power, as they are in Xcel’s community solar program.

The Sierra Club’s Natalie Cook said “we’re pleased with what is happening because they (Minnesota Power) are not required to have solar gardens.”

If the gardens are well received Minnesota Power may build more in the future, said Rutledge. Solar is growing, she said, even in the Northland. The utility’s only other large solar project, a 10 MW array at the Minnesota National Guard’s Camp Ripley opens next year.

It’s all good news to Ness, who will soon end his term as the city’s mayor.

“It’s a privilege to live on the greatest lake in the world and in a city with beautiful natural surroundings – and with that comes responsibility and a motivation to protect it,” he said.