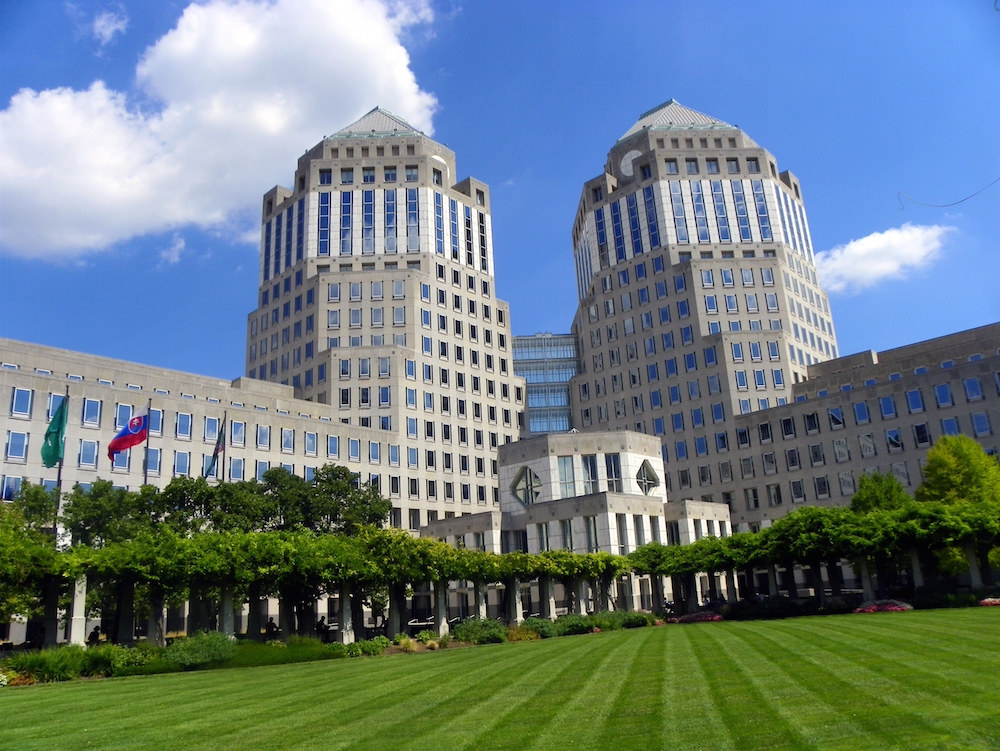 Procter & Gamble's headquarters in Cincinnati, Ohio. The company aims to improve its energy efficiency 20 percent and have 30 percent renewables by 2020.

Leading companies that do business in Ohio are already adding large amounts of renewable energy and energy efficiency to their nationwide portfolios, regardless of opposition to the Clean Power Plan by some of the state’s top officials.

Corporate decisions aim not only to boost the bottom line financially, but also to build and bolster brand identity and customer confidence, leaders from four companies said at a November 18 conference held by Ohio Advanced Energy Economy in Columbus.

“Our competition is doing this. If we don’t keep up with them or do this better than them, we don’t have a business,” George said.

Many companies come and go in the retail grocery business, he noted: “We want to be one of those that stays around for a very, very, very long time.”

Indeed, in the lead-up to climate negotiations in Paris, corporate leaders are pushing governments to adopt strong emission-reduction policies.

On Monday, leaders from 78 major companies worldwide encouraged policymakers to place a price on carbon, which would “trigger low-carbon investment and transform current emission patterns at a significant scale,” according to an open letter.

The company is also “well on our way” toward having 30 percent renewable energy by 2020, he added.

“We just announced about a month ago that we’re going to power our entire fabric and home care business with renewable energy,” Skarda said. As he sees it, renewable energy is a great opportunity to build trust and loyalty in the company’s brands.

“The Intergovernmental Panel on Climate Change in the last report said we need to be somewhere between 40 and 50 percent lower emissions by 2050 versus 2010,” Skarda added. “This puts us on a glide path so we’re doing our part. We’re very proud of that.”

“We also have a goal to reduce greenhouse gas emissions 50 percent by the year 2050,” he said.

The company’s goals are for its “total footprint,” including emissions from its cars, motor vehicles, lawn mowers and other end-use products. But, Bremer noted, “At the same time, in the plants we have an obligation to lower emissions as well.”

One way the company is doing that is by adding more wind energy, solar energy, fuel cells and other forms of advanced energy at various facilities.

“We’ve focused mostly on renewable energy at this point because, for us, a kilowatt-hour not used is the best way to reduce greenhouse gas emissions,” Bremer explained.

Lockheed Martin is not only an aerospace company, but also a leader in information systems and security, advanced manufacturing, energy and other technologies. Energy efficiency and renewable energy fit in with those businesses, said Jim Armstrong, climate change and renewable energy specialist for the company, which has multiple operations in Ohio.

“It was logical for us to do this,” Armstrong said. “Energy and electricity are mission critical. And how do you make sure that you have that reliability and resiliency throughout the enterprise?”

As Armstrong sees it, clean energy is also an avenue for opportunity. Electricity is “the greatest invention in the world, and a billion people don’t have it. So how does Lockheed Martin get in that game?”

The short answer to both questions is that the company is already in the game, with investments in different forms of renewable energy, as well as advanced energy storage.

“We walk the walk. We talk the talk,” Armstrong said.

George, of Kroger, agrees that “energy efficiency is a fantastically good investment” for companies. Every investment in the grocery business needs to provide a return, from the opening of a new store to improvements like the addition of an in-store pizza oven, he noted. Yet many of those investments are speculative, he said.

“You put in an LED light, or you put a variable speed drive in place, money starts pouring in right away,” in the form of energy savings, George stressed.

‘There are companies that are siting their facilities entirely based on the availability of renewable energy.’

More generally, “Corporate buyers are all incredibly interested in renewable energy,” Skarda, of P&G, said. “There are companies that are siting their facilities entirely based on the availability of renewable energy.”

“It’s important to all of us,” he added. “We really are seeing it as an integral part of our business.”

Investments in clean energy should also be treated as long-term commitments, Bremer noted.  Thus, instead of requiring a two- or three-year payback for technology investments, Honda looks “at things more in the long term.”

“We look at a payback within 50 percent of the life of the equipment. That’s our goal” for energy efficiency and renewable energy, Bremer said. Equipment for both types of projects can be expected to last 20 to 30 years.