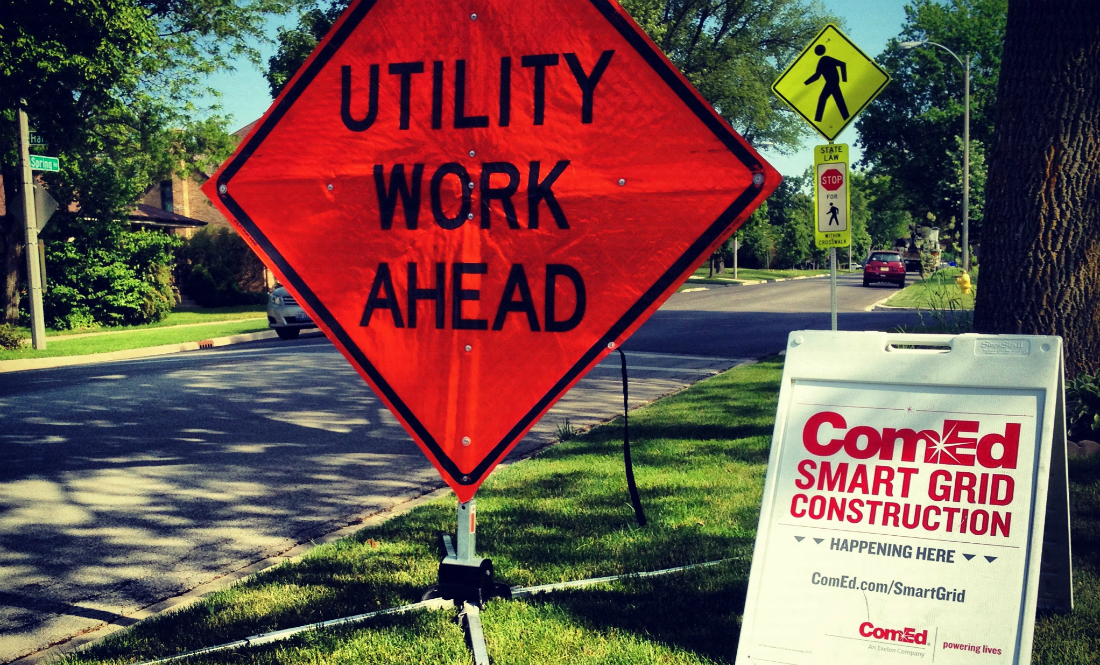 Expansion of smart meters may enable ComEd to enact demand charges for all customers.

Demand-based charges normally reserved for big industrial users could also be applied to residential customers if an Illinois utility gets its way in the state legislature.

Demand charges bill customers based on the maximum amount of electricity they use in one short time period during each billing cycle. The analogy of a pipe is often used – utilities say what matters is the width of the “pipe” needed for the highest volume of delivery at one moment, not the total volume over time.

Such charges have long been common for large industrial and commercial customers, and a number of utilities nationwide offer opt-in demand charges to residential customers.

ComEd, which serves northern Illinois, would be the first major utility to institute mandatory demand charges for all customers, if the legislation passes and is implemented as experts predict.

Utilities have described demand charges as a way to make sure that customers pay their fair share for the burden they place on the electric grid.

However, critics say that residential demand charges discourage energy conservation and efficiency and are a disincentive to installing solar. And they argue that demand charges can unfairly saddle customers who use little energy with high bills, based on infrequent usage spikes.

Consumer watchdogs and clean energy advocates are especially concerned that ComEd’s proposal is being made in the legislature rather than through rate-making before the Illinois Commerce Commission.

The demand charge was included last spring in legislation that ComEd backed, one of three major energy bills introduced in the state legislature. Experts expect that next year lawmakers will pass a bill that combines elements of ComEd’s bill; one backed by ComEd’s parent company Exelon, favoring nuclear energy; and the Clean Jobs Bill which would increase mandates for renewable energy.

The legislation would enable demand charges starting in January 2018. The charges are only practical when customers have smart meters, and ComEd’s smart meter roll-out isn’t scheduled for completion until the end of 2018. Critics say the demand charges could be forced on the public before there is an opportunity to study smart meter data that could help shape the charges and study how they might play out.

‘I expect additional utilities to propose demand charges in the next six to 12 months.’

The Salt River Project in Arizona is instituting a mandatory demand charge for all new customers with distributed generation, sparking a lawsuit from solar installer SolarCity. Nevada Energy and UNS Electric have made similar proposals, according to Hledik.

“I expect additional utilities to propose demand charges in the next six to 12 months, in some cases potentially making it a standard feature of the residential rate,” he said.

The legislation proposed by ComEd would give any Illinois utility with more than three million customers the power to institute demand-based charges. Ameren, which serves central and southern Illinois, would also qualify, though Ameren is at least a year behind ComEd in installing the smart meters necessary to implement demand charges.

Fidel Marquez, a ComEd senior vice president, described the demand charge as a way to more realistically charge customers for what they need from the grid.

“The costs of delivering electricity are driven by the demand that customers place on the system whenever they need it, and ComEd builds and maintains its delivery system – poles, wires and transformers – to handle everyone’s maximum demand for power,” he said. “The costs of this delivery system don’t change with the total amount of energy consumed.”

The legislation notes that ComEd would still bill customers through fixed charges and energy use charges. The demand charge is expected to make up about 25 percent of a customers’ total bill, or 58 percent of the delivery portion of the bill, although the final balance could change, according to a ComEd spokesman.

The legislation does not specify the time period upon which the demand charge would be calculated; a ComEd spokesman said it would likely be based on a half-hour interval.

A matter of inequity

Hledik said that in general, demand charges will cause some customers’ bills to rise, but people can lower their personal peak demand and their bills if they understand how the charges work and change their consumption habits accordingly.

“Demand charges provide customers with a financial incentive to consume electricity in a more efficient manner,” he said. “To an individual customer, reducing demand could be as simple as staggering the use of electricity-intensive appliances.”

Marquez described demand charges as a way to “correct inequities that can result in low-usage customers subsidizing high-usage customers.” Utilities nationwide have made a similar argument in favor of increased fixed rate charges, saying that people who lower their total monthly use through solar power are not paying their fair share to keep up the grid.

‘Your bill could be really high even if rest of the month you’re on vacation and not using any electricity.’

Critics of demand charges say that they are actually likely to have the most impact on residents who use smaller amounts of energy.

“If for 15 minutes you’re doing laundry and running air conditioning and someone’s using power tools at your house, your bill could be really high even if rest of the month you’re on vacation and not using any electricity,” said Rebecca Stanfield, vice president of policy and electricity markets for Solar City. “Big customers hire consultants and experts to help them manage around that charge. But it’s super confusing for typical residential customers, they’ll have a hard time figuring it out.”

Hledik noted that utilities can offer financial assistance or alternate rate plans for low-income customers to make sure they are not harmed by demand charges.

“There are many ways to design a demand charge, and the rate’s design can have a big influence on whose bills will change and by how much,” he said. “Analysis that carefully looks at different rate designs and the distribution of their impacts on customer bills, by customer segment, is an important part of any demand charge roll-out.”

The smart meters being deployed across ComEd’s service territory give the utility and customers detailed information about exactly how much electricity they use and when. So theoretically people could avoid the kinds of spikes that would lead to high bills under a demand charge system, proponents argue.

“Demand-based rates will change the steps customers take to manage their delivery costs but do not eliminate their ability to do so,” said Marquez. “A customer’s demand would be reset to zero and re-measured each month, enabling a customer to change behavior and reduce delivery system charges.”

But critics of demand charges lament that one high spike each month could essentially wipe out the other measures consumers have taken to reduce electricity use or generate their own electricity with solar.

And unlike ComEd’s Peak Time Savings program or other programs that reward people for reducing energy use during regional peak demand times like hot summer afternoons, the demand charge for a given individual would kick in regardless of when their energy use spikes. In other words, a customer’s bill could be based on a usage spike at night even though there is plenty of electricity available and little congestion on the grid at that time.

For customers with solar, the demand charge could encourage them to use more electricity when their solar panels are generating – to help offset their highest demand rate. But this would be in the daytime when overall demand from the grid and power plants is highest.

“It’s not even lining up the customer’s peak with the utility’s peak [demand period],” said Stanfield. “It is pushing in the wrong direction in terms of price signal. This is really about locking people into high distribution charges no matter what their consumption pattern is.”

Demand charges are seen as a serious disincentive to customers installing distributed solar. Like increased fixed charges, they mean that total amount of energy used is not the prime determinant of an electric bill. So reducing electricity use on a daily basis thanks to a solar array or efficiency measures will not necessarily mean bill savings.

And demand charges that could vary greatly every month based on a customer’s different usage spikes make it hard to do the math predicting how long it will take to achieve savings equal to the cost of solar panels.

‘How much energy would I save – who knows? What will my energy bill be? Who knows?

“It would be very difficult to demonstrate what the economics of a solar system or energy efficiency would be,” said Amy Heart, senior manager of public policy for Sunrun Inc. “How much energy would I save – who knows? What will my energy bill be? Who knows?”

Heart noted that someone might use relatively little energy from the grid all month thanks to solar panels, but if they decide to have a Super Bowl party with a large-screen TV and appliances running at a time that the solar panels aren’t generating, that one evening will determine their bill.

Devil in the details

By trying to implement the demand charge through legislation, Heart said, ComEd is “proposing this change without having to prove their math, without having to allow those conversations through the regulatory process.”

Dave Kolata, executive director of the Citizens Utility Board (CUB), sees some bright spots in ComEd’s proposed legislation, which also includes provisions for community solar, electric vehicles and energy efficiency. Kolata would generally like to see more emphasis on dynamic pricing including time-of-use (TOU) pricing, including by expanding programs that the utility already has in place.

He thinks it’s possible demand charges could be part of a smarter pricing regime that could lead to energy savings, but “with demand charges, the devil’s in the details.”

“There may be some scenarios there that are workable, and a lot that aren’t,” he continued. “You’re talking about a fine needle that you need to thread.”

In the bigger picture, the demand charge proposal is in keeping with efforts by utility companies to protect revenue and respond to a new reality where distributed solar, smart meters and efficiency measures give customers more control over their energy use.

“We know at some point there will have to be a détente or compromise on these macro rate design issues, in every state,” Kolata said. “We’re hopeful we can reach agreement. At the end of the day it’s about efficiency, demand response, distributed energy resources. We need a policy framework that supports this, rewards this, and maximizes the potential of the smart grid. It won’t be easy.”