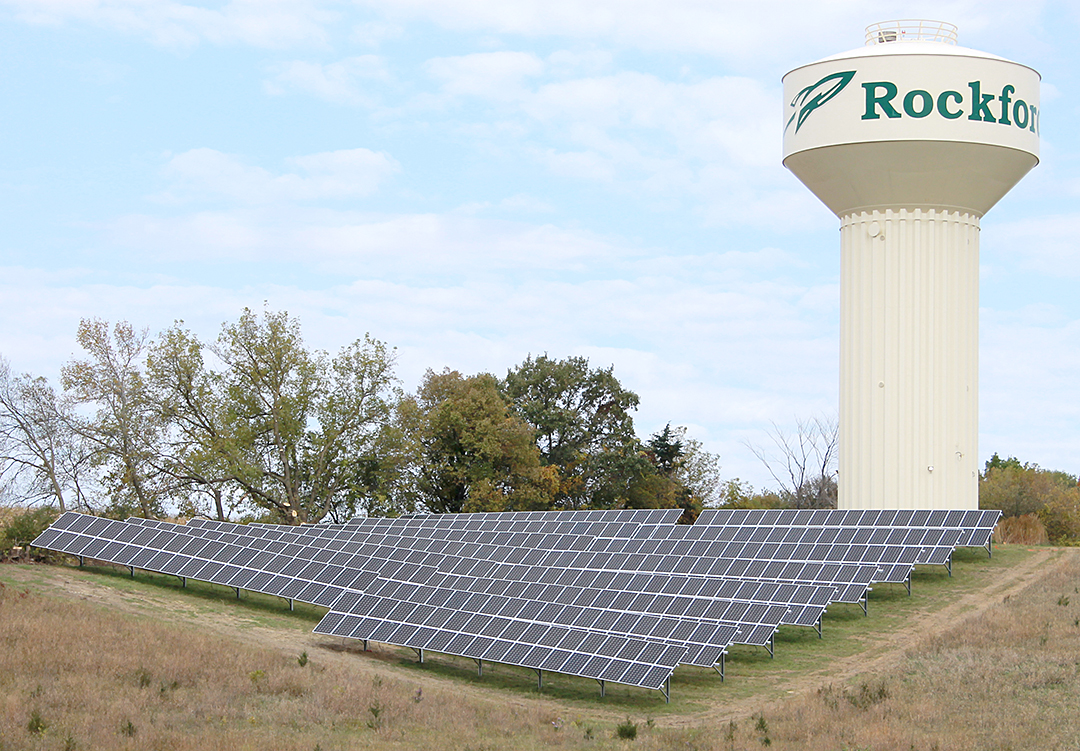 A Minnesota town is expecting to see significant cost savings from a unique solar arrangement with a rural cooperative.

Wright-Hennepin Cooperative Electric Association which is located in the the city of Rockford, has a record as an innovator in community solar, having installed the first one in Minnesota in 2013. Rockford, located just northwest of Minneapolis, is a major commercial customer.

The cooperative and the city created a project, dubbed “Bantam,” that placed 60 panels on a city-owned shopping mall and 270 more on property next to a water tower.

The city of 4,300 people will offset 67 percent of its power needs with solar over the 25 years.

“It’s a two-fold piece for us,” said Steve Nisbet, Wright-Hennepin’s vice president of external relations. “It’s an opportunity to partner with our members, in this case a city we’ve had a long term relationship with.

“And it fills a charge from our members and our board to bring more renewables into the mainstream. Along with our other community gardens, this is another opportunity to continue that process.”

Wright-Hennepin wanted to partner with Rockford because financially it’s a low-risk customer, Nisbet said. If the effort works, the same approach might be offered to schools, businesses and other commercial customers in the cooperative’s portfolio.

Since the project has just one customer it doesn’t qualify as “community” solar although it shares a few characteristics with it, among them a 25 year contract and a cost to the city that is less than it pays now for power, Nisbet said.

The city will save 7 percent annually over what it would have paid receiving power under a conventional contract, said city administrator Dan Madsen.

“We saw the Bantam project as attractive for a lot of reasons, from increasing the city’s green energy profile to the cost savings,” he said.

Rockford also wanted to help Wright-Hennepin “continue to grow” its new service offerings. Under the agreement, the cooperative will own and maintain the panels for the duration of the contract.

‘It would have been silly not to do it.’

The solar project drew strong support from several council members, among them Rick Martinson. He liked the idea of supporting the expansion of clean energy and the cost savings the city will accrue by purchasing solar energy.

“It’s a benefit to us and to Wright-Hennepin, and I think it will become an example to other communities,” he said. “It would have been silly not to do it.”

The city initially looked doing a larger solar project that would include using floodplains for panels but instead scaled it back, Madsen said. While Wright-Hennepin provides electricity to a majority of Rockford, the community spreads into Hennepin County, where Xcel Energy serves commercial and residential customers.

In fact, about 30 percent of Rockford is in Xcel’s territory. Would the city buy into a community solar garden to cover that power use? “We haven’t looked at that,” said Madsen. “Bantam was developed for a different purpose than community solar.”

The city might consider another solar project but currently is studying whether to capture rainwater from buildings such as the mall and reusing it for irrigation.

“We’re keeping our eye out for the next thing,” Madsen said.

Wright-Hennepin, meanwhile, is looking to build another community solar garden early next year. The garden will be 150 kilowatts (kW), or three times as large as the other two gardens. The first garden to open in 2013 was 32.5 kW, the second 29.5 kW, said Nisbet.

The third garden will not be built until all the panels are pre-sold and sales are going well, he said.