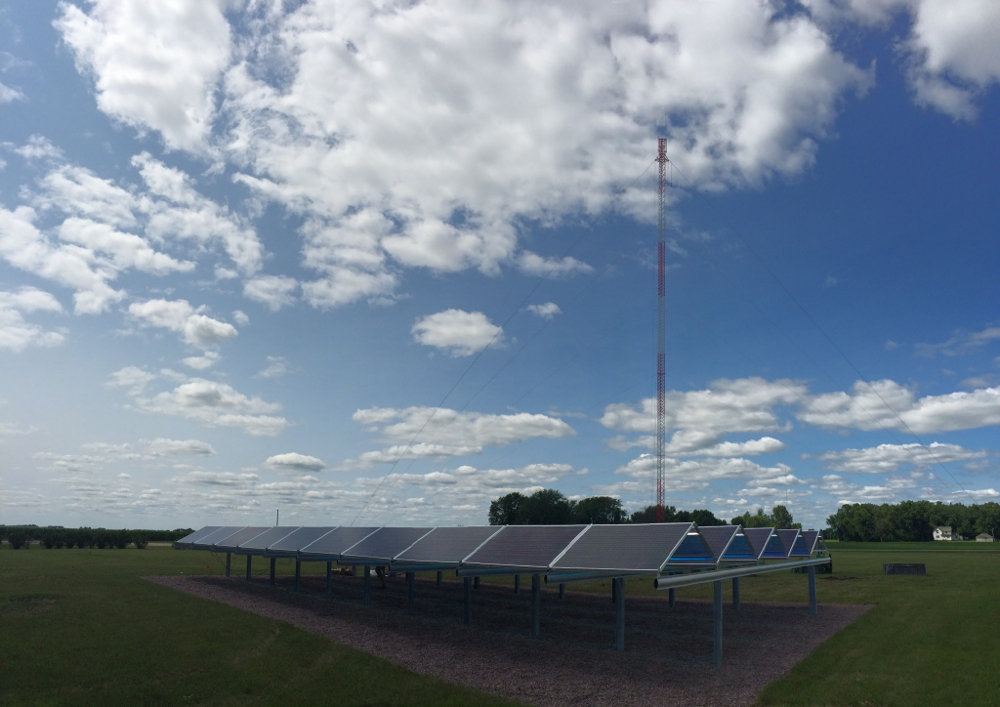 This solar project in Brown County, Minnesota is part of a broader effort to help rural co-ops get experience with solar power.

Last month, Minnesota’s second largest supplier of electricity finished a distributed generation project that included more than half its members.

Great River Energy, which provides power to 28 member cooperatives, has installed 20 kilowatt (kW) solar arrays at 19 sites in its network over the past two years. Nine members also saved money by taking advantage of Great River Energy’s offer to build community solar gardens at the same time it installed the 20 kW arrays.

Community gardens added another 360 kW of solar in the cooperative’s territory, which serves 1.7 million people.

“That was utility-scale solar power while this project was distributed generation,” he said. “It was a joint effort with our members. Great River Energy installed the arrays and they (the members) chose the location.”

The cooperative is exempt from Minnesota’s mandate that utilities produce 1.5 percent of their retail sales from solar by 2020. Yet Bergrud believes the project prepares the company for any future solar regulatory requirements as well as for potential demand for more solar in the territories of its members.

While part of the effort is focused on gathering data on how solar performs in different parts of the state, he said, another reason was to give member cooperatives experience in dealing with solar development, from applications to siting.

The cooperatives had to connect the array to their existing system, Bergrud said, and they learned how to manage an application from a solar developer, in this case GRE.

“They treated us as selling solar on their system, and that was the intent – to give them experience and knowledge and an understanding of what that process entails and what requirements they need to have in place and what sort of testing they need to do once these systems are online,” he said. “Not all of them had that exposure before this project.”

The first array to go live was for Dakota Electric in August 2014. Spokesman Mike Fosse said the solar installation “has been an excellent project that has performed very well. There’s been no maintenance issues at all.”

The experience did gave Dakota Electric, which serves 104,000 customers, a sense of how to deal with a solar development and how to interconnect panels to its grid, Fosse said.  The project also has led the cooperative to explore adding solar options in the future, he noted.

By employing a templated design and bulk equipment order from tenKsolar, a Bloomington-based panel manufacturer, the cooperative gave members a 40 percent discount on their cost, Bergrud said. They still had to pay for labor.

In fact, to achieve the same level of costs a cooperative would have to build at least a 250 kW project, he said.

“It was a good opportunity for them to do community solar at about the lowest cost we could possibly offer,” Bergrud said.

The size of the community solar ranged from 8 kW, to 102 kW at Steele-Waseca Cooperative Electric, with the average being 40 kW, Bergrud said. Midwest Energy News reported the different experiences the cooperatives are having with community solar earlier this year.

A handful of members either sold out or are near to selling out subscriptions.

“Others have had varying success rates, but overall, I think sales are still doing fairly well in general across the membership,” Bergrud said.

Since some of the arrays have been operational for several months, Bergrud has some early results. The panels are performing at 13.5 percent of their nameplate capacity, a bit short of what he had been hoping for.

“It was slightly less than we thought,” he said. “Most of our estimates and estimates contractors provided put us at 15 percent for our area. Most of Minnesota would be at 15 percent. But we’re seeing this after only one year (of operation).”

In contrast, states such as New Mexico would see 30 to 40 percent capacity. The panels are optimized for summer, the best time of year for solar energy at 22 percent in July; gray December hovers around 3 percent.

“We’ll see what the future brings,” he said.