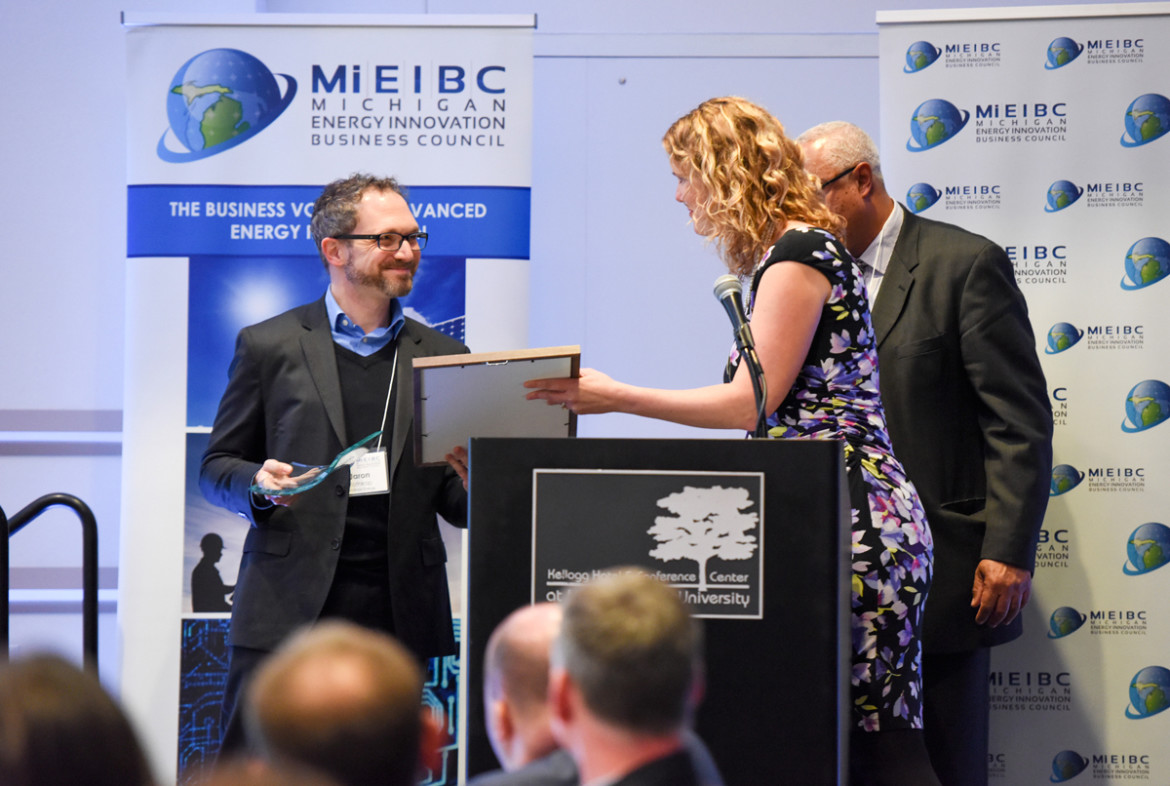 Since launching in 2009, ZeroBase Energy LLC has manufactured hybrid energy generation and storage solutions for the U.S. Department of Defense, installed microgrid systems in a Hawaiian brewery and rural villages in Haiti and sub-Saharan Africa, and built an off-the-grid power system at a Canadian wilderness resort.

But while most of the Ferndale, Michigan-based startup’s projects so far have taken place far from the Midwest, it’s not for a lack of potential at home, according to ZeroBase’s Solutions Manager Drew Spencer.

“Anywhere with a grid is at risk,” says Spencer. “That’s a question the entire utility infrastructure in the U.S. is grappling with.”

In November, ZeroBase was recognized by the Michigan Energy Innovation Business Council as an “Emerging Business of the Year,” an honor it shared with Ahmeek-based Neuvokas.

Liesl Clark, founding partner of the Michigan-based energy policy consulting firm 5 Lakes Energy and MIEBC president, says the ability of ZeroBase to push the envelope on innovation in areas with high energy costs and little-to-no grid access allows it to develop technology that can also apply in better-resourced areas like Michigan.

“They can work out the kinks in the technology and bring it back here. Their microgrid technology fits very nicely with that model,” says Clark. “While we do have a great distribution grid in Michigan, there is always the need to make it more resilient and reliable. And there are a lot of companies that are interested in microgrid development, and also a lot of homeowners [who would be interested].”

Tucked into a 3,000-square foot industrial building in downtown Ferndale, an inner-ring Detroit suburb with a penchant for countercultural art, ZeroBase’s headquarters are within walking distance of a local distillery, boutiques, and restaurants. The front portion of the space houses offices, while the rear, devoted to R&D and prototyping, is a tangle of wires, metal and circuit boards.

The company moved here in 2013 after an incubation stint at NextEnergy, a Detroit nonprofit advanced energy and transportation accelerator. But what first brought the company to Michigan in 2010, according to president and CTO Jaron Rothkop, was opportunity wrought by an auto industry in peril.

“In 2010, if you remember the state of the auto industry at the time, there was a lot of capacity looking for new markets and opportunities,” says Rothkop. “There’s a fantastic manufacturing base here, and a lot of suppliers who make the equipment that we need. There was also TACOM (a U.S. Army weapons R&D facility headquartered in Warren, Michigan), and a supply base that serves the military here already. Since initially our focus was overseas markets and defense, Detroit was a fantastic place to start a company and have access to all of that capacity and interest in finding diversity beyond automotive.”

ZeroBase has outsourced its manufacturing operations to nearby off-site facilities, most recently in Lake Orion, Michigan, where it can leverage suburban Detroit’s network of automotive supply manufacturers. The company also maintains offices in Oahu, Hawaii and Huntsville, Alabama, and partners with international development agencies like the Clinton Global Initiative and Earthspark International, which have helped facilitate deployment of its technology to 16 countries. For example, a 2012 partnership with Earthspark International secured a USAID grant to fund installation of ZeroBase’s microgrid technology in a Haitian village. The system included a 90 kW solar PV array, 400 kWh battery storage, and a small diesel generator. It brought electricity to 430 homes.

That military and international development experience has afforded ZeroBase the opportunity to iterate and refine its technology for domestic applications such as emergency management and disaster resilience.

“We’re spending a lot of time on emergency response in New York State and California,” says Rothkop. “The systems that we’ve developed and equipped U.S. forces with overseas have the same application when there’s an emergency in the U.S. and people are scrambling. What the first responders went through, both after Katrina and after Sandy, was that they were equipped with generators, but they had no access to fuel. So they’re having to go several states over in some cases to get fuel. Emergency managers have a demand for more stable and resilient sources of power. That’s the area where our company’s expanding in the U.S.”

And emergency management may represent a potential growth sector in the Midwest, according to Spencer.

“If the grid goes down in winter with below-freezing temperatures, and say a police station or fire department wanted to have an emergency management facility to allow first responders and people to come in and have shelter, they could build a microgrid [to provide for that],” he says.

Spencer notes that most of the microgrid industry development so far has been in states where government policies and incentives are paving the way. Much of ZeroBase’s non-military sales have been in Hawaii, where legislators recently adopted a 100 percent renewable portfolio standard by 2045. Hawaiian projects have included taking a distillery off the grid and working with Maui Brewing Company to install an off-grid solar PV system with 100 kWh of energy storage.

Developing opportunities for advanced energy applications like microgrids and energy storage at home will require some policy shifts, according to Clark.

“At the Michigan Energy Innovation Business Council, we work with a lot of companies that are based here in Michigan, that employ here in Michigan and manufacture here in Michigan, and their markets are elsewhere,” she says. “A lot of that comes down to policy; have we built a market in the state of Michigan or allowed market access for those types of advanced energy [products]?”

According to Spencer, the main obstacle to market expansion in Michigan right now is competition with electric utilities.

“I think that’s the reason it’s starting to take off in California and other states. They have initiatives to promote energy storage,” he says. “It’s got to come from a state level. Continuing tax incentives for residents and businesses to integrate solar or any renewable technology… that’s going to increase adoption. And then taking it even further and putting in a mandate for the utility to increase its resiliency through energy storage.”

As for the future, Rothkop notes that the field is still emerging.

“Using alternative energy and cleaner power sources [instead of] diesel and fossil fuels for off-grid applications is still truly new. Our customers, whether they are non-governmental agencies like the UN or government agencies like the Department of Defense, are still understanding what the requirements are,” he says. “They’re still developing how this equipment will be used and what the cost savings will be.  And so our customers are on the leading edge of this new technology.”