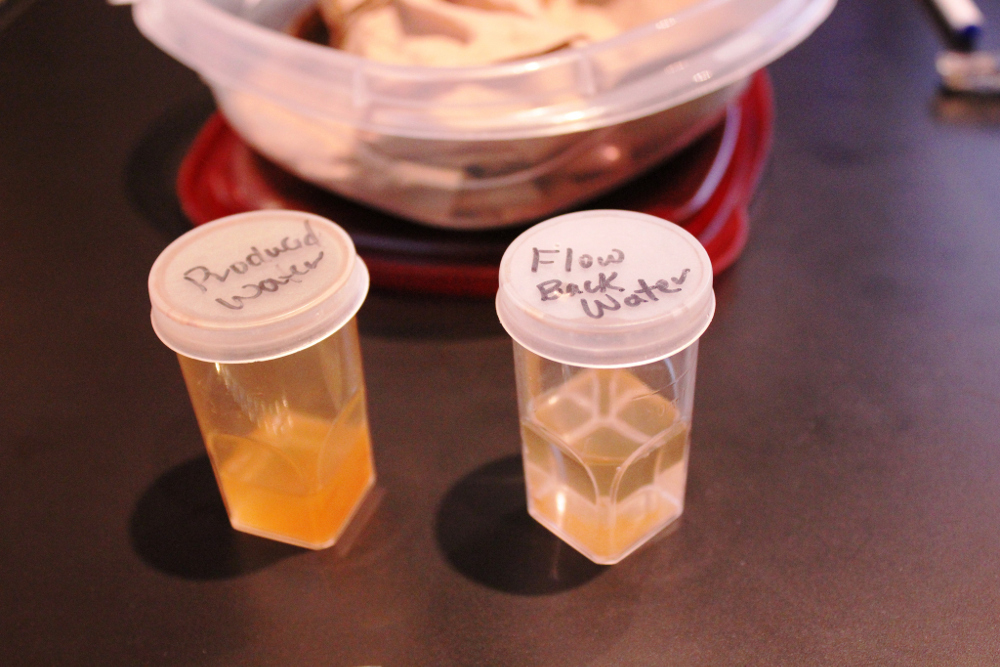 Water from the production process and flowback from drilling are the two main types of wastewater from fracking operations.

In hydraulic fracturing, what goes down isn’t always the same as what comes back up.

The process, informally known as fracking, pumps millions of gallons of treated water and sand into deep shale formations so oil and natural gas can flow out.

Along the way, drilling and production also bring up brine from the ground – super-salty liquid with elevated levels of heavy metals, radium and other chemicals.

If scientists can learn more about that naturally-occurring water in the shale formations, drilling companies and well operators might figure out better ways to protect equipment and well integrity. More complete information could also lead to safer disposal options and other actions to protect public health and the environment.

Researchers from government, academia and industry reported on new study results – looking at shale formations in Ohio and other states — at the Geological Society of America’s annual meeting in Baltimore in November. But more data are needed to draw definitive conclusions.

“Hydraulic fracturing uses lots of water and produces a lot of water by volume,” said Madalyn Blondes at the United States Geological Survey (USGS). “So to be able to understand all these things, we really need to understand the natural formation water.”

Fracking and horizontal drilling have led to a boom in oil and natural gas production. Yet just as the process uses large quantities of water to crack rock, it also produces huge amounts of liquid waste as flowback and produced fluids.

“Flowback usually is what we get out when we clean the well up after a hydraulic fracking job,” usually within the first week or two, explained Taras Bryndzia, a geologist with Shell International Exploration and Production, Inc. Flowback typically produces huge quantities of water in a short time period.

Produced fluid comes up afterward and as the well continues in operation. The quantities are much less than flowback on a daily basis.

“The composition in the flowback period is not the same as what comes back later,” said Blondes, who presented her research on produced fluid from the Utica shale at the GSA meeting.

In addition to radium, produced fluid from the Marcellus and Utica shale usually has higher levels of salt and heavy metals than fracking fluid does.

As a result, produced fluid could “be worse for the environment than what’s being injected in there,” Blondes continued. “That could affect disposal.”

Produced fluid is also “more of a problem” for well operators, Bryndzia noted, particularly when it comes to “salt in our production facilities.” Among other things, chemicals could crystalize inside pipes and reduce the rate of production.

“If I know where this stuff is coming from, I can actually mitigate against having salting out in production,” Bryndzia said.

“It seems very clear that what we’re looking at is actually natural formation water,” Blondes said.

Yet knowing that the produced fluid is “stuff that’s naturally there” doesn’t solve the mystery of how it got there in the first place, she said.

For both the Utica and Marcellus layers, brine in produced fluid likely started out in an ancient sea.

The salt content of that ancient sea water would have become more and more concentrated as water evaporated. Some liquid may still exist in either deep shale or adjacent rock layers. If the water evaporated completely, solids could have been left in the rock.

Pumping large quantities of fracking fluid down into the deep shale formations could dissolve some chemicals from the rock. Similarly, some amount of liquid could still remain in the tiny pores of that rock and then come up after fracking.

Bryndzia’s research on the Marcellus shale, also presented at the GSA meeting, suggested that lots of brine likely began in the shale layer in one of these ways. However, his data also showed that some brine could come from an adjacent layer.

Indeed, it would be unlikely for the Marcellus shale layer to be the source for all of the produced water, said Brian Stewart, a geologist at the University of Pittsburgh who also spoke at the GSA meeting. Stewart’s team analyzed drill cuttings from Marcellus shale operations in New York.

“There’s not enough salt or water in those pores to really explain the super salty water that comes back,” Stewart said.

Instead, the fluid could come from part of the formation “that’s maybe not really a shale, like a little lens of sand in there that might hold more water,” he suggested. “Or, it could come from rock formations above or below the shale.”

In order for that to happen, some interaction with that other layer would have to take place. One possibility is the fracking process itself.

“When you hydraulically fracture, you basically create cracks under those formations, and the water can leak back into your well,” Stewart said.

“It’s clear that the fractures extend outside of the target formation” in the fracking process, he added. “It’s not really possible to keep it within a relatively thin shale unit.” Other research presented at the GSA meeting supports this position.

In some cases, some upward migration of gas or fluids may be possible, which is why there’s some concern about areas with lots of older, abandoned oil and gas wells. However, groundwater contamination would be “extremely difficult” as a result of fracturing done in deep unconventional shale layers, Stewart said.

“You’re still not getting anywhere close to the surface,” Stewart noted. When groundwater contamination has occurred, the more likely reason is faulty drilling or well completion, he said.

Getting more exact answers gets tricky, especially because there’s a bit of a “chicken and egg” problem, Blondes noted. Fluids from deep shale layers generally don’t come up unless fracking is done, so it’s harder to figure out what would come up otherwise.

In the case of produced fluid from the Utica shale, “ it’s likely it’s from Utica itself,” Blondes suspects. “It seems somewhat different from the Marcellus.”

“We definitely cannot say for sure,” though, she said, “because we don’t necessarily have samples overlying and underlying the formation.” To get those samples, she and other researchers need more access to wells, particularly those in the Utica shale.

“We’re actually mostly interested in some of the older wells that have been in production for a while,” since those would have the highest proportion of natural formation water, Blondes said.

USGS is “not a regulatory agency,” she added, “and we take utmost care to not give away any proprietary data.”

“We only have a couple of data points from the Utica,” Blondes said. “Our goal is to be able to sample the Utica and above and below.”