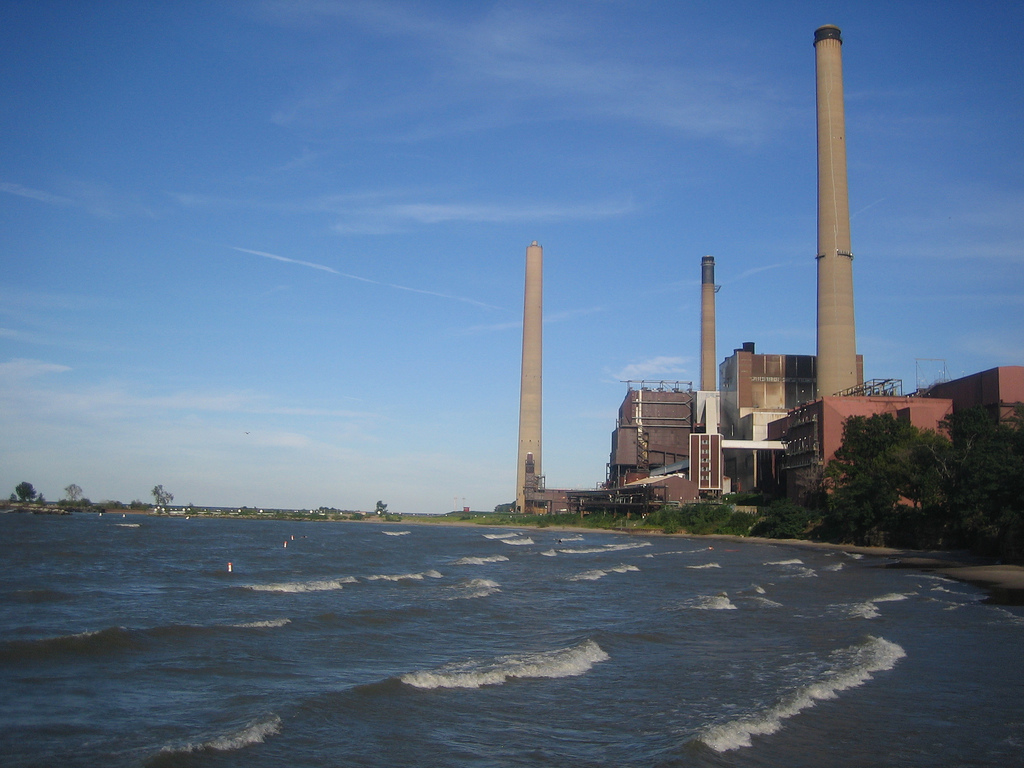 Power plants that rely on large amounts of water for cooling could face operational constraints in a warming climate.

Ohio energy leaders are not especially worried about future climate change impacts on their operations, despite an unusually warm 2015 and two recent studies suggesting that extreme weather events could cause significant problems for the state by mid-century.

One study by researchers at Climate Central and ICF International gave Ohio a D- grade for its preparedness to deal with anticipated climate change impacts, ranking it in the bottom ten among U.S. states. That research was presented on December 15 at the American Geophysical Union fall meeting in San Francisco.

Power plants can be particularly vulnerable to increasing temperatures from climate change, according to the second study, which came out this week in Nature Climate Change.

The Climate Central report is the first nationwide analysis of each state’s preparedness for extreme weather events that are driven by climate change.

“We looked mostly at extreme weather events and how that could change in the future with climate change,” explained Rita Yu of Climate Central. “We assessed the magnitude of that for the state as a whole.”

“For Ohio in particular, we looked at extreme heat, flooding and drought,” Yu said. “For each of these hazards we looked at the climate science.”

The severity of summer droughts for Ohio could increase by 50 percent by 2050, her research team found.

At the same time, it reported, heavy run-off events that lead to flooding could increase by 25 percent.

“Then we looked at whether the state agencies are doing anything about the hazards we looked at,” Yu said. In Ohio’s case, the answer is not much at all, she noted.

“There’s no state-level adaptation planning,” Yu said. “That would be a big gap.”

“You need to find out if you’re actually at risk, and doing a vulnerability assessment might be one way to find out,” she continued. Absent an assessment, it’s hard to know what steps the state needs to take to reduce its vulnerability.

Indeed, Ohio might well be fairly resilient, Yu added. “But without doing a complete assessment, it would be difficult to guess.”

“Obviously, it’s up to the state agencies to choose whether they do something about these potential hazards,” Yu said, noting that Climate Central does not make specific policy recommendations.

But, she added, it couldn’t hurt to do that assessment sooner, rather than later.

Climate change impacts should be a special concern for the energy sector, particularly power plants that use large quantities of water for cooling purposes, according to an analysis published earlier this week. Researchers at Wageningen University in the Netherlands and the International Institute for Applied Systems Analysis in Austria prepared that report, which appeared in Nature Climate Change.

More than 97 percent of the electricity produced in the state of Ohio comes from thermoelectric power plants, according to the Public Utilities Commission of Ohio. The majority of those are coal-fired power plants, with smaller shares for natural gas plants and nuclear plants.

At the same time, an increase in extreme heat events will place greater stress on electric power plants and the grid, Yu noted.

Transitions in the energy sector plus other adaptation and mitigation measures can help reduce the anticipated impacts of climate change, the European study authors found.

Jennifer Young, a spokesperson for FirstEnergy, said “we have not evaluated these studies and are unable to offer any comments or speculation on future operation of the plants.”

American Electric Power spokesperson Melissa McHenry said it would be “complete speculation to try to project the makeup of AEP’s generation mix or the impact of weather on that fleet in 2050. “Our existing coal plants are very likely to be retired by that time, but it is hard to say today what generating sources we will have at that time,” she said.

“That being said,” McHenry continued, “extreme weather events and climate variability are something that AEP routinely considers in its operations and will continue to do so.”

“AEP has more issues with flooding than drought conditions at its plants in Ohio and in the other Midwestern states where we operate,” she noted, “although there have been a few times that extreme heat has limited our ability to discharge water from a few of our plants due to thermal discharge limits.”

“Water quality, use and management specifically are important issues for AEP and our industry,” McHenry added, noting that the company makes data about water use available annually.

At the same time, the energy sector is responsible for a significant share of emissions that contribute to climate change. If those emissions continue, they could aggravate ongoing climate change and make its long-term impacts worse.

The federal Clean Power Plan aims to curb those emissions in order to mitigate the impacts of climate change, but Ohio and various other states continue to fight in court against those rules.

Electric power plants aren’t the only part of the state’s energy sector that could be affected by climate change impacts. Ohio’s oil and natural gas industry uses substantial quantities of water for hydraulic fracturing, or fracking.

Ohio has generally been water-rich, compared to other states. However, critics have voiced concerns about the draw-down of the state’s “available water,” which acts as a cushion against extreme drought events.

‘If the water level is low and everyone is trying to get more water out of less supply, that could cause some conflict there.’

An increase in the severity of extreme drought events would additionally strain the state’s water supplies, according to the Climate Central/ICF report. And drought would affect not just the power sector, but also demands for drinking water, agriculture and other uses.

“If the water level is low and everyone is trying to get more water out of less supply, that could cause some conflict there,” Yu said.

Leaders of Ohio’s oil and gas industry feel optimistic that any problems could be handled.

“Oil and gas exploration and production has been taking place in Ohio for over 150 years and will continue to take place for the foreseeable future,” said Shawn Bennett of the Ohio Oil and Gas Association.

“The alleged impacts of these studies would be addressed by the industry over the next 35 years similarly to how we have progressed with the changing environment since the first commercial oil and gas well was put into production in 1859,” Bennett added.

Nonetheless, Yu said, Ohio might benefit from at least beginning to assess and plan for the impacts of climate change so it could consider all demands on its resources.

“Even if it’s relatively climate resilient, it would be good to do the assessment to see how vulnerable things are, to see how much risk the existing systems can tolerate,” she said.