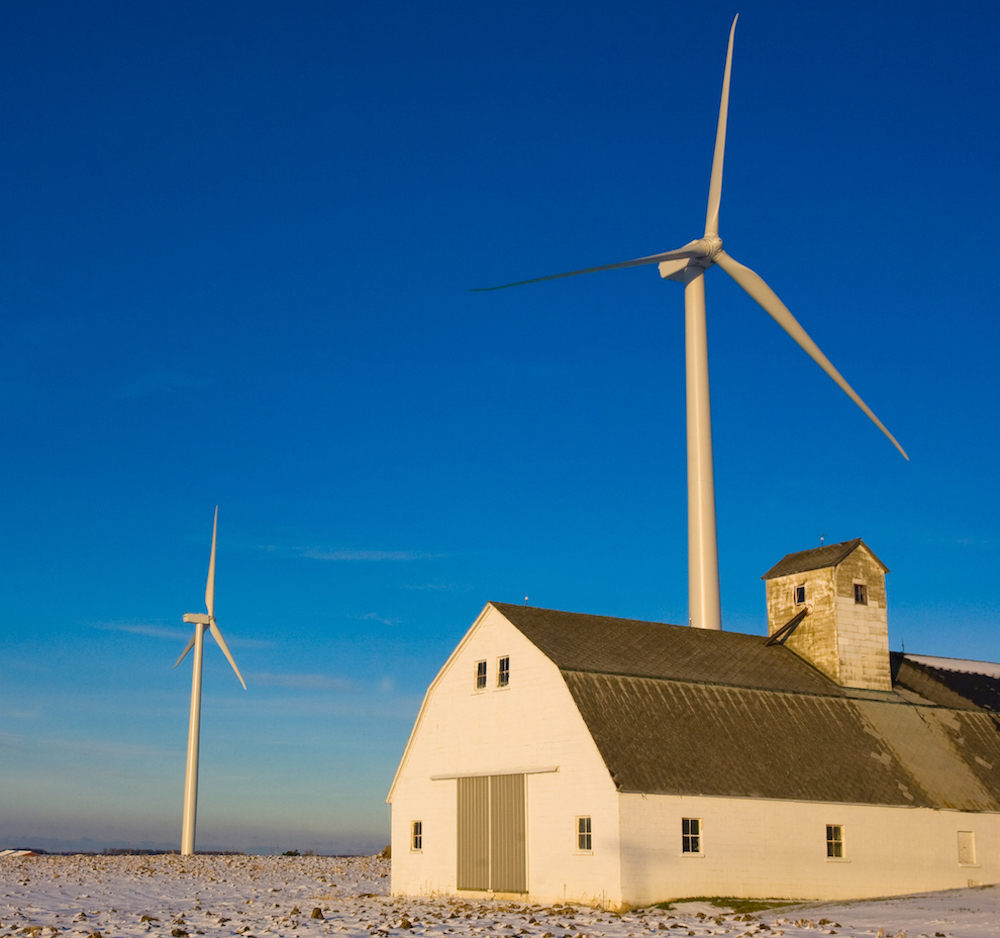 Wind development in Michigan has taken place mostly in the Thumb region, such as here in Ubly, Michigan.

Declining renewable energy prices do not mean Michigan lawmakers should abandon proposals to expand standards for how much clean energy should comprise the state’s energy mix, advocates say.

Key Republican lawmakers have said that Michigan’s 2008 renewable portfolio standard has succeeded in getting the nascent wind industry off the ground and able to compete with fossil fuels, so they argue the wind industry shouldn’t be helped along anymore by mandates.

They argue there is no reason not to require utilities to commit to electric generation with declining costs and not subject to long-term price volatility like natural gas.

Michigan’s Renewable Portfolio Standard leveled off at 10 percent at the end of 2015. As nearly 10 coal plants are scheduled to retire this year, the state will likely displace that generation with a mix of renewables, natural gas and energy efficiency.

The question is whether that would be developed under a stronger standard or, more likely, goals and detailed utility planning requirements. Gov. Rick Snyder has a goal of meeting up to 40 percent of the state’s energy needs through energy efficiency and renewables.

“Let’s have a diversified mix,” Ward said. “Is this going to happen naturally on its own because (renewable) prices come down? Our belief is: No, it’s not.”

Ward added that the nature of utility markets creates an incentive for utilities to build out capital-intensive projects that — in light of federal emissions regulations under the Clean Power Plan — would likely mean natural gas plants.

“They’re measuring things not only from fuel cost or that natural gas, wind or solar are at certain price points, but what does the future look like? As a utility, they are going to make money on capital improvement projects,” Ward said. “We as an organization don’t have a problem with that, but if the goal is to expand renewables, the question becomes: How legislatively do you make that happen?”

Ward pointed to a recent report commissioned by the MCEF that suggests legislation should guide how utilities move forward on renewables.

“Short of that, they’re not incentivized to do that,” said Ward. “They do what’s best for the company.”

Among the report’s key findings: “Despite a sharp drop in the price of natural gas since last year’s (Levelized Cost of Electricity), the costs of all forms of utility-scale solar photovoltaic and utility-scale wind technologies continue their dramatic declines.”

The report was praised by the MCEF and a coalition of business groups in Michigan that are pushing state lawmakers to “rein in rising electricity costs by ensuring utility companies lock in low rates for wind and solar,” according to a press release.

“One of the key things for Michigan in terms of economic competitiveness is that recent renewable projects have come in below the cost of the utility’s average portfolio,” Valerie Brader, executive director of the Michigan Agency for Energy, told a conference in Lansing last month.

In November, the MPSC approved an agreement between developer Geronimo Energy and the investor-owned utility Consumers Energy for a 100-megawatt wind project. Geronimo will sell wind energy to Consumers for less than $45 per megawatt-hour, the lowest wind price to date approved by the MPSC.

In 2010, the MPSC approved contracts for more than double that amount. A project that came online in 2014 was approved at $59 per megawatt-hour.

“It’s been pretty exciting — dramatic, even,” Julie Baldwin, renewable energy manager for the MPSC, said of the price trend.

However, Baldwin noted that it’s important “to be careful” when comparing levelized costs for dispatchable fossil fuel plants and renewables. Levelized costs are the net value of the cost of electricity over the lifetime of the source.

The Energy Information Administration projects that the levelized costs for new generation in 2020 will be $75.20 for combined cycle natural gas plants and $73.60 for wind.

“They definitely have different operating characteristics,” Baldwin said. “It’s not like you could meet all of Michigan’s energy needs with wind, but it is part of a good portfolio.”

According to Sam Gomberg, Midwest energy analyst with the Union of Concerned Scientists, Michigan’s renewable energy price trends are “consistent with what we’re seeing across the Midwest.”

“Some people are thinking this needs to bottom out at some point, but they are not really sure where it will get to,” he said.

Gomberg testified in Michigan last year on energy bills proposed in the state legislature. Lawmakers did not vote on proposals that surfaced in 2015 and will continue the debate this session.

While some legislators argue that renewables should be able to stand on their own now without mandates, Gomberg said that simply looks at the question from an “industry perspective.”

Gomberg also agrees with Ward’s point about the need to increase diversity within the energy mix.

“When you integrate renewables and energy efficiency, it really lowers risk for ratepayers and also provides certainty for companies that want to invest in Michigan,” he said. “That’s why the state needs to continue to diversify its energy mix with more renewables. Expanding the standard is one way to lock that in.”