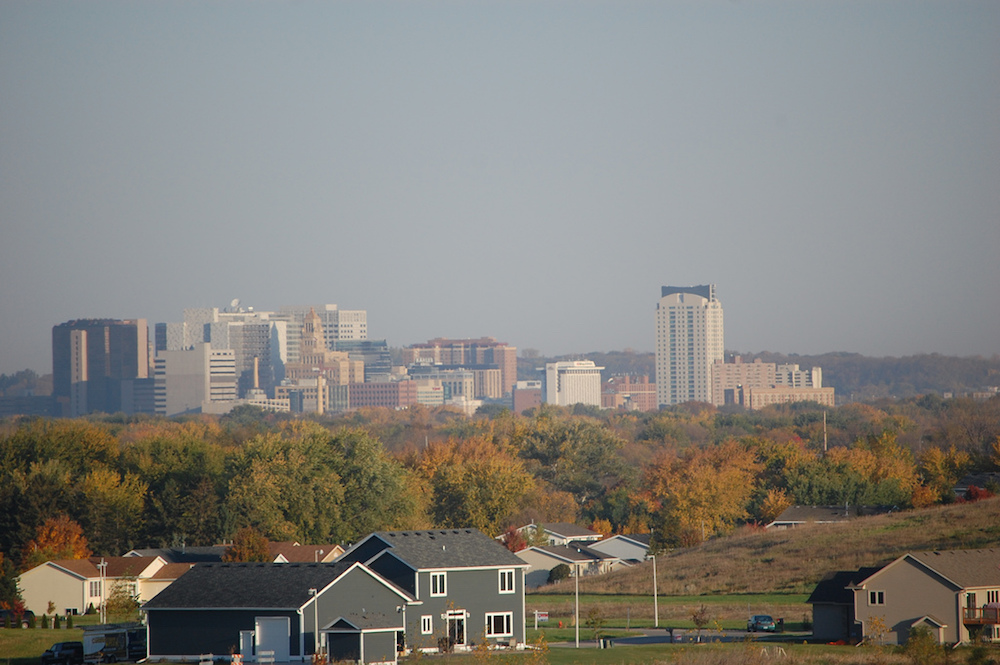 The DMC is perhaps the most ambitious development ever undertaken by a Minnesota city. The multi-billion-dollar plan calls for attracting developers over the next two decades to construct 12 million square feet of offices — about eight times the size of Normandale Lake, the largest business park in the Minnesota — in an effort to create 35,000 to 45,000 jobs.

The development stems from the desire by Rochester and Mayo Clinic to position the city as “a global medical destination center,” according to the DMC’s website.

It will not only take a lot of construction, but also a lot of energy. That the energy generated should be as green as possible seems a given, according to some local officials and advocates.

“It’s hard to imagine the DMC of the future using the energy system of the past,” said the CEE’s Innovation Exchange Director Jenny Edwards. “The system should use green-energy choices and that should be tangible to visitors and workers at the site. It’s also an obvious thing from a branding and marketing perspective to give deep consideration to.”

Rochester Mayor Ardell F. Brede made a proclamation in October calling for the whole city — not just the DMC — to be energy net zero by 2031. He pointed to CEE’s report as the first step in a process to reach that goal and believes success there may lead to expansion of energy goals to the rest of downtown.

Part of the reason for the 2031 benchmark is that Rochester Public Utilities has announced it will not renew its contract with Southern Minnesota Municipal Power Agency in 2030, allowing it to buy energy on the open market and tap more sustainable sources, Brede said.

For the initial strategy of focusing on building standards and district energy, the CEE report relies on low hanging fruit, followed by more aggressive plans.

“We recommend they implement everything with less than a 10-year payback,” Edwards said. “In a sense, we consider those no brainers.”

Getting to net zero

Chief among the strategies is improving energy efficiency of buildings within the district by 20 percent by 2020 over 2015 levels. The goal is the same as what Mayo seeks to achieve by 2030.

But the DMC is hardly open land. The neighborhoods it covers are in or near the city’s downtown. Many buildings will have to be retrofitted to be made more energy efficient.

Secondly, the report recommends any new buildings should follow Architecture 2030 guidelines, a set of global standards focused on constructing carbon-free structures by 2030. (A local version — Buildings, Benchmarks and Beyond, or B3 — was developed by the University of Minnesota’s Center for Sustainable Research in conjunction with the CEE.)

By requiring or encouraging the design of buildings for optimal energy efficiency, the DMC ensures less demand for power than a more traditional development would consume, Edwards said. Moreover, the buildings should be continually tracked for energy performance, she added.

A second component to reaching net zero for the DMC is district energy. The neighborhood sits next to three existing district energy systems, two connected to Mayo and a third to the eastern edge of downtown Rochester. Such systems pipe steam or chilled water underground to buildings, eliminating the need for individual heating or cooling systems.

The DMC’s buildings could be warmed and cooled by excess power from the three district energy systems, or a new one could be created.

Using the existing systems is going to “require some coordination, especially between the DMC, the city and utilities,” Edwards said. “There will be a need to coordinate in a way that is somewhat new for the entities down there.”

Optimizing energy efficiency combined with onsite renewables would drive down the amount of power that would have to be purchased from RPU, Edwards said.

Rochester should develop a “culture of sustainability” and promote efforts to global audiences, the CEE report notes. Several major medical centers have made energy efficiency and sustainability part of their vision and the DMC will be competing against them for recognition, the report adds.

Challenges to the report

Anna Richey, a member of the city’s Energy Commission, likes the report’s findings but pointed out that some buildings are already under construction. Asking developers to change designs or make them more efficient could be stretch, she said.

Not all city council members are supportive of mandates for sustainable buildings, Richey said, and the city’s weak-mayor structure means Brede may have some convincing to do with a handful of council members.

If the city’s chamber of commerce agreed with an emphasis on efficiency and green energy, the council would likely go along with it, Richey said.

If that came true, the DMC’s role as a “sustainable energy zone,” as the report calls it, could grow into a larger footprint, Richey suggested.

Mayo played a large role in the report, which is a good sign that the clinic is onboard with the DMC’s approach to energy, said Richey, who works for Conservation Minnesota, a nonprofit environmental organization.

Yet getting developers to build with energy efficiency in mind is no easy task if there’s not some kind of incentive, according to Energy Commission Chairman Ray Schmitz.

Whether the project will offer some kind of incentive in return for high-performance buildings remains a question, he said.

There is also more than $585 million of public money being invested in the project but it is  uncertain whether that money will be leveraged on programs suggested in the report.

The report will be followed in March by an energy action plan sponsored by the city’s Energy Commission. Rochester is also re-writing its comprehensive plan and that, too, is expected to be released this year, Schmitz said.

His own committee continues to focus on lower energy consumption not only at the DMC but for the rest of the city.

While Brede understands there are “naysayers,” he is confident Rochester is on the right track. He highlights solar panels on a Mayo parking ramp that power lights and elevators on sunny days, as well as high recycling participation rates.

The DMC’s board still has to sign off on the general strategy.

Net zero is more than a decade away, but the time to act is now, Brede said.